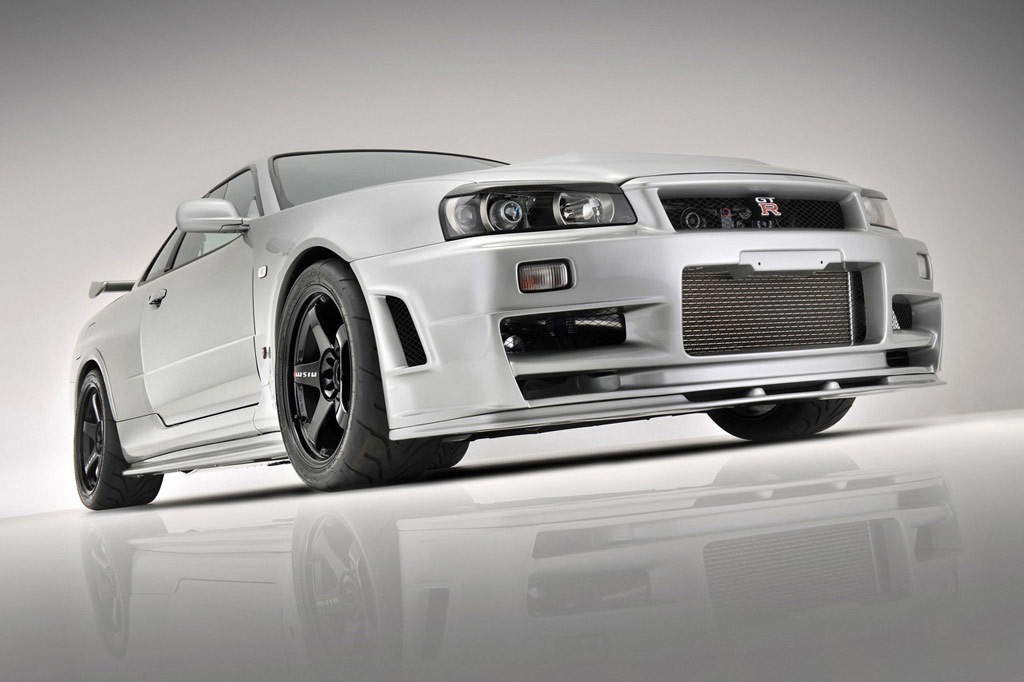 Legends never die
The factory has shown the way: on the occasion of the 20th anniversary of the company’s own sports department NISMO (NISsan MOtorsports International), in 2004, the Japanese presented a special edition limited to exactly 20 vehicles of the legendary Skyline R34 GT-R, the “Z-tune”. Since the production of the R34 had been stopped three years before, naturally, there were no brand-new cars of this series available at that time. NISMO 20 therefore purchased 20 used cars with low mileage which they dismantled down to their individual components and then re-assembled completely. Up to today the extremely rare Z-tune is known as the spearhead of the R34 GT-R family and was referred to as “the world’s best sports car” for a long time – there are many who still do.

“New cars” built in 1999
It is no wonder that JAPO Motorsport GmbH selected this vehicle as the demo object to start a new field of activity: with the specialised restoration of Japanese super sports cars the performance specialists from Essen are opening up new markets – with used vehicles in good condition which, after extensive restoration, almost have the feel of new cars. The individual concept of each project enables the construction of absolute rarities.

Let’s get back the vehicle: JAPO Motorsport bought a used Nissan R34 GT-R (constructed in 1999, chassis no. BNR34000500), took it apart down to its basic structure, followed by an extremely complex rebuilding – closely based on the legendary Z-tune model in terms of technology and appearance. The 100 percent restoration of the high performance coupés took 3.5 months, the result being truly breathtaking.

Original Z-tune
Without laying it on thick, original NISMO Z-tune components (front aprons, front mudguards and rear wheel housing) provide the skyline with impressive racing optics. NISMO also offers red rear lights. The expression “Technology made visible” could not be more fitting for anything but the ARC rear diffuser which purists are especially thrilled about due to its edges and naked metal.

Apropos naked metal: the bodywork was completely stripped of paint in the immersion bath, subsequently sealed and painted in the original silver “KY0”, formerly reserved for the Z-tune.

HKS-Bi-Turbo-Power
Without exception, JAPO Motorsport refined the legendary RB26DETT straight six cylinder engine bi-turbo motor with a cylinder capacity of 2.5 litres cylinder capacity using the finest HKS components. To name but a few, two GT RS turbo chargers are now blowing into the cylinders with powerful 1.5 bar boost, sparking off a true hell fire. The intercooler, elbows, half pipe, racing suction and chamber kit, injectors, ignition plugs and cylinder head gaskets are also made by HKS. An HKS Fcon Pro standalone engine management system is responsible for the combustion process. Due to its ARC-4 inch titanium exhaust system, you will already hear the JAPO-Skyline from far. Performance measurement resulted in powerful 523 PS and 597 Nm – on the wheel!
Traction with the gearbox is enabled due to a considerably resilient HKS clutch. JAPO Motorsport treated the switch box as well as the rear axle differential with additional coolers by ARC for optimised stability.

There is no doubt about the HKS Hipermax thread chassis – it has absolute cult status among experts. It is supplemented by an ARC strut mounted between the two front strut pillars, which makes the handling of the coupé even more reliable.

Semi slicks and classy interior
Real NISMO Z-tune 9.5×18 inch five spoke wheels are rotating in the GT-R wheel housing. Once they are heated, the Toyo Proxes R888 semi slicks in 265/35R18 offer an extremely high level of grip which should however not be tested to the limits by inexperienced drivers. The serial braking system of the R34 GT-R is often scolded. However, after the installation of a stoptech brake with 355/35 millimetre discs and four-piston callipers in front as well as 355/32 millimetre discs and two-piston callipers on the rear axle, JAPOS’s “new vehicle” now offers deceleration values to make the passengers’ eyeballs bulge.

The interior is sporty, classy and not purist at all. JAPO Motorsport installed leather/alcantara fittings for the front and back seats, the dashboard, the centre console, door and side panels, the columns, the roof liner as well as the rim of the Sparco steering wheel. The NISMO tachometer unit is scaled up to 320 km/h, the large multifunctional display above the centre console was extensively updated and now even includes a lap timer.

By the way: the vehicle shown, the no. 1 of an edition limited to 20 pieces (just like the grand original) is for sale. For EUR 89,900, which is quite appropriate given the elaborate, new construction, the exclusive Skyline could be yours.