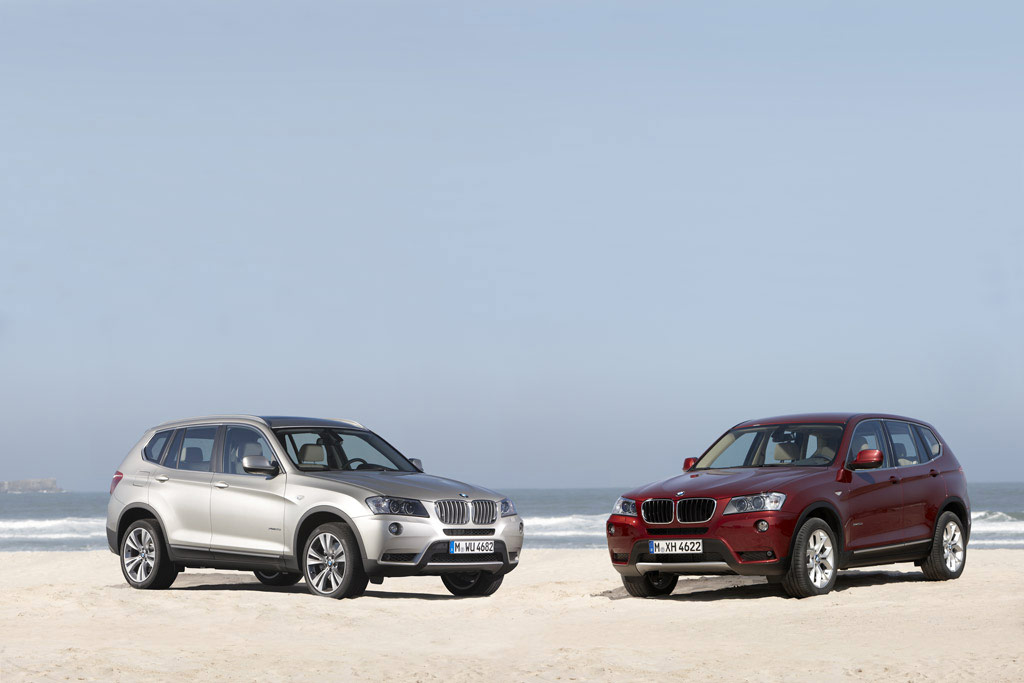 The design of the new BMW X3 combines the typical BMW X character with a dynamically stretched silhouette. Thanks to a generous amount of space and a high degree of variability in the interior, it is possible to adapt travel comfort as well as transportation capacities to suit each personal requirement.

Four-wheel drive technology BMW xDrive not only optimises traction, but has also been specifically harmonised to ensure enhanced driving dynamics. The new BMW X3 offers state-of-the-art qualities with uncompromising diversity, combining both driving pleasure and efficiency with comfort and functionality, durability and elegance.

The new BMW X3 offers a choice of two ultra-modern power units. The fourcylinder diesel featured in the new BMW X3 xDrive20d develops a maximum power output of 135 kW/184 bhp, exceeding that of its predecessor by 5 kW. At the same time, average fuel consumption in the EU test cycle has dropped by 14 percent to 5.6 litres/100 km. The new BMW X3 xDrive35i is powered by a 225 kW/306 bhp straight six-cylinder petrol engine.

The design: Urban elegance, dynamically flowing lines and the characteristic features of a BMW X model
The body design of the new BMW X3 conveys urban elegance, durability and agility. The combination of a flat front end and a high rear end produces, when viewed from the side, a dynamically formed wedge shape, indicating the vehicle’s sporting characteristics. Convex and concave surfaces are accentuated with distinctively structured lines, giving the car body the appearance of a meticulously modelled sculpture. The BMW X-specific black bordering on the lower edge of the car body of the new BMW X3 has an exceptionally discreet design.

At the front end of the new BMW X3, the forward-slanting BMW kidney grille, a large headlight assembly, a powerful-looking front apron and the bonnet boasting six contour lines sweeping down to meet at the kidney grill, signalise breathtaking presence. Together with the round headlights, the fog lamps, which are positioned far towards the outside, form the triangular light source arrangement that is characteristic of BMW X models. The upper edge of the headlight assembly sports an accentuating chrome trim, creating the focussed look so typical of BMW vehicles. In conjunction with the optional Xenon headlights, the vehicle features daytime running lights that function by means of bright white LED light rings.

The side view of the new BMW X3 is also characterised by a unique interpretation of typical BMW X design features. Powerfully flared wheel arches and the short distance between the front axle and the instrument panel are an indication of four-wheel drive technology and emphasise the robust character of the Sports Activity Vehicle. The dynamic appearance of the silhouette is additionally accentuated by three characteristic lines.

The new BMW X3’s brand-typical contour line at door handle level rises steeply at first within the front wheel arch area, then to flow gently to the rear end. Two less pronounced lines follow the course of the line above the wheel arches.

The rear end is characterised by horizontal lines, underlining the new BMW X3’s robust character. Accurately applied lines and expressively modelled surfaces create attractive light and shadow effects. The taillights, which are located far to the outside, have a distinctive T shape that is characteristic of the BMW X3. Combined with optional Xenon light, LED light banks reflect a typical BMW night-time design.

Interior: Premium ambience, intelligent functionality.
A generous and variable spatial concept, high-grade materials and a characteristic three-dimensional surface design provide the interior of the new BMW X3 with a modern, premium ambience and intelligent functionality. The horizontal orientation of the instrument panel accentuates the width of the interior. Brand-typical driver orientation is emphasised by the asymmetrically designed centre console. The raised seating position facilitates convenient entry, whilst optimising the overview of the traffic situation. The control display of the optional operating system BMW iDrive is harmoniously integrated into the instrument panel. The 8.8-inch highresolution screen of the navigation system Professional featured in the new BMW X3 is the largest on-board monitor in its segment.

Both up front and at the rear the new BMW X3 has a large number of large storage compartments, trays and cup holders. The three rear seats offer outstanding comfort for travelling long distances and significantly more leg and elbow room compared to the predecessor model. With a volume of between 550 and 1,600 litres, the luggage compartment of the new BMW X3 is the best in its segment. At the same time, the variability with which available space can be adapted to suit each personal requirement, is also unrivalled. The rear seat backrests can be split at a ratio of 40 : 20 : 40 and the three segments can be folded down either individually or together. In this way it is possible to adapt the luggage compartment step by step according to requirement.

Engine range: Four-cylinder diesel and straight six-cylinder petrol engine of the latest generation
The new BMW X3 xDrive20d now offers better performance and higher efficiency than any of its comparable rivals. It is powered by a 2-litre fourcylinder turbo diesel engine with aluminium crankcase and Common Rail direct injection, delivering a maximum power output of 135 kW/184 at 4,000 rpm and peak torque of 380 Nm between 1,750 and 2,750 rpm. The engine develops sufficient power to allow the vehicle to accelerate from 0 to 100 km/h in 8.5 seconds, reaching top speed at 210 km/h. With an average fuel consumption of 5.6 litres/100 km and a CO2 emission level of 149 grams per kilometre, the BMW X3 xDrive20d establishes a new benchmark for efficiency in this vehicle segment. The new BMW X3 xDrive20d with automatic transmission achieves identical acceleration, top speed and fuel consumption, with a CO2 emission level of 147 grams per kilometre.

Spontaneous response, high-revving characteristics, excellent running smoothness and efficient fuel economy characterise the power unit featured in the BMW X3 xDrive35i. Consequently, it possesses the qualities typical of a straight six-cylinder BMW engine, combing them, thanks to an innovative technological concept, at an exceptionally high level. BMW TwinPower Turbo technology, High Precision Injection and variable valve control VALVETRONIC have been combined with each other for the first time. As a result, the 3-litre power unit delivers a peak output of 225 kW/306 bhp at 5,800 rpm, with maximum torque of 400 Nm being available at 1,300 rpm.

This engine enables the X3 xDrive35i to sprint from 0 to 100 km/h in just 5.7 seconds. Top speed is 245 km/h. The BMW X3 xDrive35i offers not only the most dynamic driving characteristics, but also by far the most favourable fuel consumption and emission levels within the competitive environment of its engine class. Average fuel consumption in the EU test cycle is 8.8 litres/100 km and the CO2 emission level is 204 grams per kilometre.

BMW EfficientDynamics in the new BMW X3: Premiere for Auto Start Stop function in conjunction with automatic transmission
The new BMW X3 xDrive35i is equipped as standard with an eight-speed automatic transmission. This option, also unique within the competitive environment, is available for the BMW X3 xDrive20d as an alternative to the standard six-speed manual gearbox. The automatic transmission is combined for the first time with an Auto Start Stop function. When stopping at road junctions or in a traffic jam, the engine is automatically switched off. As soon as the driver takes his or her foot off the brake pedal, the engine restarts. If the Auto Hold function is activated, brief pressure on the accelerator pedal is sufficient.

Newly developed suspension, optimised xDrive and unique options for made-to-measure dynamics and comfort
The new BMW X3 comes with permanent four-wheel drive technology BMW xDrive as standard. This electronically controlled system ensures variable distribution of drive torque to the front and rear axles. The control unit, which is interlinked with the DSC Dynamic Stability Control, counteracts at an early stage any tendency to oversteer or understeer through fast and precise response. By means of innovative tuning designed to enhance driving dynamics, the intelligent four-wheel drive technology optimises not only traction, but, above all, handling in bends. Even during steady cornering, a higher proportion percentage of drive torque is transferred to the rear wheels.

Optional Performance Control enhances the BMW X3’s agile handling even further. Targeted braking of the rear wheel nearest the inside of the bend together with a simultaneous increase in drive power ensure the vehicle’s exceptionally agile steering behaviour. This results in enhanced dynamics in bends and best possible traction.

The new BMW X3 also features completely redeveloped suspension technology. The combination of a double-joint spring-strut axle at the front and a multi-link rear axle offers the ideal prerequisites for optimising agility and driving comfort to an equal degree. EPS Electric Power Steering including the Servotronic function for speed-dependent power steering is incorporated in a BMW X3 model for the first time and contributes significantly to precise handling. The newly conceived variable sports steering available as an option reduces the degree of steering movement necessary to turn the front wheels. As a result, less steering effort is required for parking, cornering and swerving manoeuvres. Dynamic Damper Control is optionally available for the new BMW X3. The electronically controlled dampers adapt to road surface conditions and the driver’s style of driving. The driver is able to influence the characteristic map of the damper control by means of the Dynamic Control system. This function, which is available for a BMW X model for the first time, enables the driver to choose between the “NORMAL”, “SPORT” and “SPORT+” modes using a button on the centre console. Therefore, in addition to damping behaviour, accelerator progression, engine response, the characteristic curve of the power steering, DSC response thresholds and – depending on desired options – the shifting dynamics of the automatic transmission are influenced. All factors are combined into a well-balanced overall set-up.