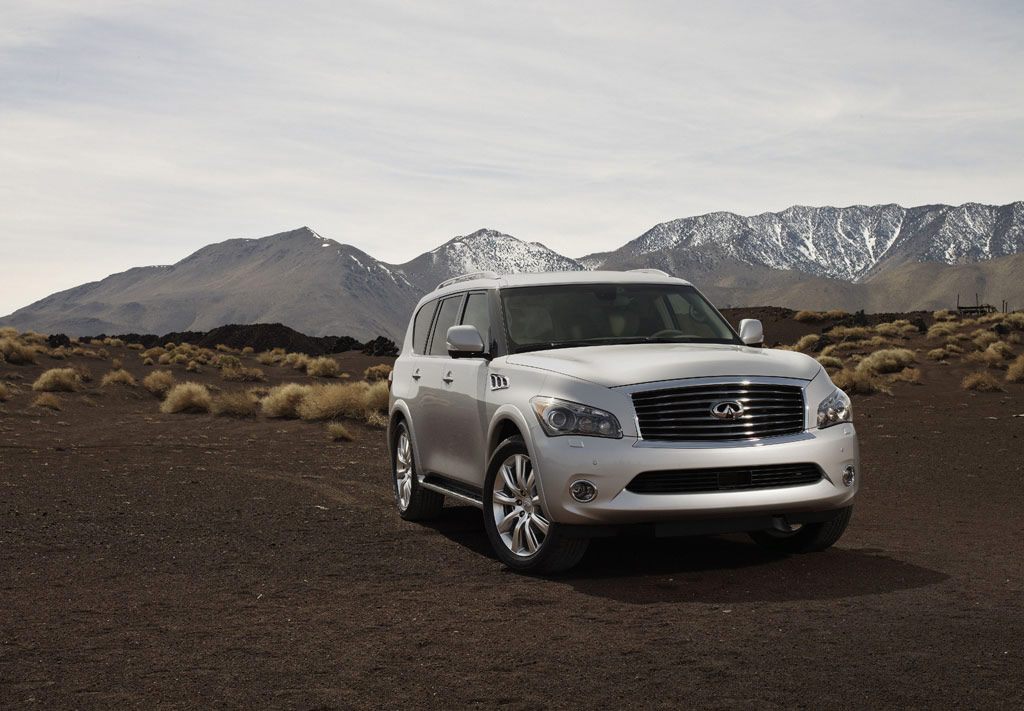 The 2011 model year is turning out to be one of the most important in Infiniti’s now 21-year history — with the introduction of the all-new, next generation versions of the Infiniti M luxury sedan and Infiniti QX luxury SUV leading the way. Both vehicles are now available at Infiniti retailers nationwide.

And, while that might be more than enough for most brands, 2011 also brings the introduction of two important product extensions to the award-winning Infiniti G line — which will be announced August 13th and 14th at the annual Pebble Beach Concours d’Elegance.

The Infiniti EX, FX, G Coupe and G Convertible also receive a number of key enhancements for 2011. Infiniti has also announced two near-future models, the Infiniti M Hybrid and an Infiniti EV. More information on these vehicles will be released later in the year ahead.

2011 Infiniti QX
All new from the platform up, the 2011 Infiniti QX is conceived to attract and hold viewers’ attention, conveying its underlying sense of power and strength. The design is dynamic, its size capable of transporting up to eight adults and their belongings with spacious elegance.

2011 Infiniti M
The all-new 2011 Infiniti M embraces the essence of all things Infiniti – style, performance, luxury, craftsmanship and technology- taking each to the highest levels ever for Infiniti’s halo sedan. The 2011 Infiniti M is available in M37 and M56 model designations, with rear-wheel drive or Infiniti’s Intelligent All-Wheel Drive system. The M37 features a 330-horsepower 3.7-liter V6 engine – with increased power and fuel economy versus the previous generation M35’s 3.5-liter V6.

The new M is also a showcase for Infiniti’s advanced, user-focused technologies, carrying on the tradition of the previous generation M. New technologies include Infiniti Drive Mode Selector, a four-mode driver-selectable control of throttle and transmission mapping that helps optimize vehicle performance; Active Noise Control, which reduces undesirable engine harmonics, providing a quieter cabin; Blind Spot Warning (BSW), which helps alert the driver if another vehicle is detected in the blind spot area; Blind Spot Intervention (BSI), a world’s first system that, in addition to the Blind Spot Warning, helps the driver return the vehicle back toward the center of the lane of travel in the event of unintended drift; Forest Air system, which helps reduce the intrusion of unpleasant odors into the cabin and provides natural “breeze-like” airflow; Eco Pedal, which provides driver feedback to encourage eco-driving behavior; and Active Trace Control, which adjusts engine torque and the control of braking at each of the four wheels to help enhance cornering performance.

The 2011 Infiniti M is available now.

2011 Infiniti EX
For 2011, the Infiniti EX35 again combines the 4-door convenience of a luxury sedan and the cargo area of an SUV – offering the sporty style and luxury that has become synonymous with Inspired Performance. Along with its sleek, sculpted, elegant skin, the EX emphasizes exhilarating driving performance, as provided by an advanced 297-horsepower 3.5-liter V6 engine and available Intelligent All-Wheel Drive.

EX also offers a host of available technologies. The Around View Monitor utilizes four small cameras located front, side and rear to give the driver a “top-down view” of the outside of the vehicle and help reduce blind spots when parking. Other driving aids include Lane Departure Prevention system (LDP), Intelligent Cruise Control, Distance Control Assist (DCA) and Intelligent Brake Assist (IBA) with Forward Collision Warning.

The Infiniti G Line
The Infiniti G Line is on a roll entering the 2011 model year. Following extensive enhancements for 2010, including refined exterior, interior and equipment refinements, sales continue to show strong growth. Through June, G Sedan calendar-year-to-date sales have increased more than 28%, while G Coupe sales are up more than 33% for the same period. Expect the momentum to continue as all three G models — Sedan, Coupe and Convertible — are refined once again for 2011.

2011 Infiniti G Sedan
Enhancements to the popular Infiniti G Sedan for 2011 start with the introduction of new “Limited Edition” and “Sport Appearance” models with special exterior and interior content features. Other 2011 refinements include one new exterior color and standard Scratch Shield Paint on all models.

All 2011 G models continue to offer a strikingly seductive exterior, defined by its sleek wave form hood, signature G-style taillights and raked A-pillars and athletic stance. Inside, the G Sedan provides a crafted, heritage-inspired interior environment and luxury features such as standard leather-appointed seating and an available audiophile-quality Infiniti Studio on Wheels by Bose.

2011 Infiniti G37 Coupe
Following extensive enhancements last year, the Infiniti G Coupe enters the 2011 model year with redesigned front fascias for both Sport and non-Sport models (with fog lights moved from the headlights to the lower fascia area). Other enhancements for 2011 include the availability of the Sport Package on G37 Coupe AWD models; the addition of Navigation Package content as standard on G37 Coupe Sport 6MT; revised 18-inch and 19-inch aluminum-alloy wheel designs; the addition of Scratch Shield Paint as standard on all models; and two new exterior colors: Malbec Black and Lapis Blue.

The 2011 G Coupe will again be available in both rear-wheel and all-wheel drive. Every G37 Coupe comes equipped with a standard 3.7-liter VQ-series V6 with VVEL (for Variable Valve Event and Lift) rated at 330 horsepower and 270 lb-ft (366 Nm) of torque. The engine is backed by a choice of an electronically controlled 7-speed automatic transmission with available magnesium paddle shifters or a 6-speed manual.

2011 Infiniti G37 Convertible
As the “open air” embodiment of Infiniti “Inspired Performance,” the G37 Convertible is designed to rejuvenate the spirit with seductive styling and exciting performance. Its three-piece power retractable hardtop is designed to look as good with the top up as down, while adding all-weather convenience and ease of operation.

Every G Convertible comes equipped with a standard 3.7-liter VQ-series V6 with VVEL (for Variable Valve Event and Lift) rated at 325 horsepower. The engine is backed by a choice of an electronically controlled 7-speed automatic transmission with available magnesium paddle shifters or a responsive close-ratio 6-speed manual transmission. The G37 Convertible Sport 6MT adds sport-tuned steering and larger sport brakes, along with 19-inch aluminum-alloy wheels and W-rated performance tires.