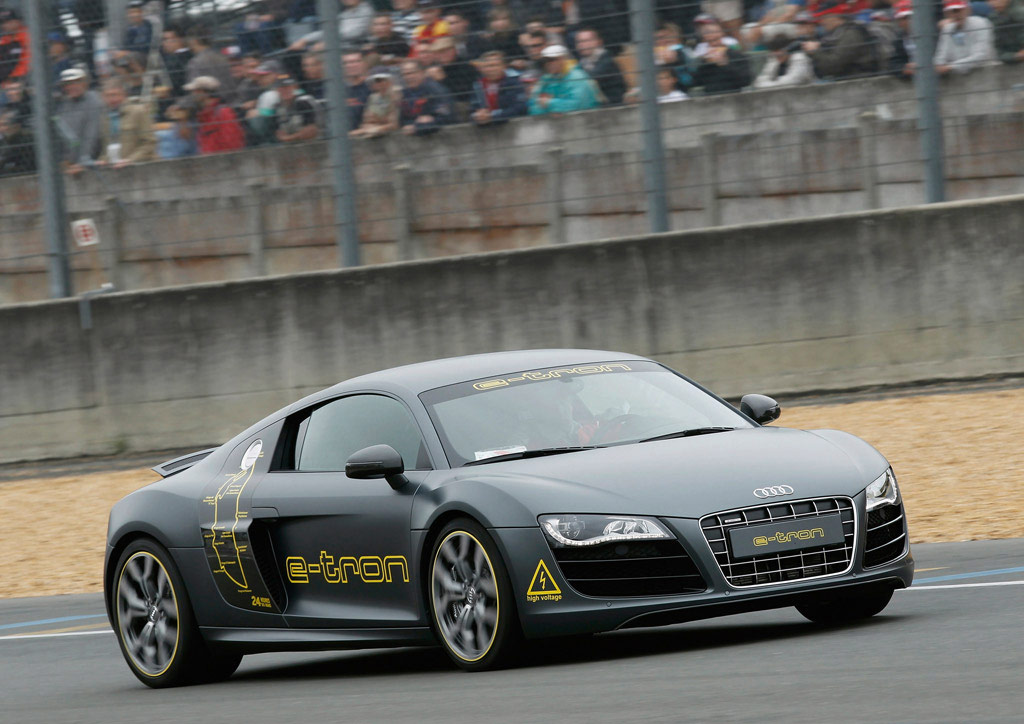 The Audi team secured a double victory for the four rings in the inaugural “Silvretta E-Auto Rally Montafon 2010” and the 13th “Silvretta Classic Montafon” with the Audi e-tron technology demonstrator based on the R8 and the Audi ur-quattro from 1988. Three-time Mille Miglia winner Luciano Viaro clinched first place in the classic car rally. Development Chief Michael Dick and works driver Lucas Luhr took the Audi e-tron electric sports car across the finishing line with the best result over a course of 167.5 kilometers (104.08 miles).

“We are delighted at the Audi e-tron’s victory in the first E-Auto Rally,” declared Michael Dick, member of the Board of Management of AUDI AG with responsibility for Technical Development. “On the Silvretta E-Auto Rally’s challenging route profile, we were able to demonstrate that we are well on the way to bringing electric drive to production maturity with our e-tron technology demonstrator based on the R8.”

Audi R8 e-tron wins Silvretta E-Auto Rally
In the “Silvretta E-Auto Rally Montafon 2010”, the 230 kW (313 hp) R8 e-tron technology demonstrator had to show what it is capable of over three stages and ten time trials. The two-seater was pitted against 23 other electric cars over three days of racing, clinching victory in the overall standings by more than half a second. This rally was not just about speed. The vehicles had to achieve specific target times in the time trials.

The biggest challenge for the Audi team came on the second day’s racing in the famous Silvretta mountain and valley time trials. In the fourth time trial, the Audi R8 e-tron had to drive up the Silvretta High Alpine Road and handle an altitude difference of 1,000 meters (3,280.84 ft) over the mountain road’s 15 kilometers (9.32 miles). Audi works driver Lucas Luhr nevertheless managed to finish third in the R8 e-tron. The Audi team even managed to advance to second place in the overall standings for the second day. Upon reaching the finishing line in Partenen at the end of the third stage, Development Chief Dick was able to celebrate overall victory for Audi. The Audi drive concept was particularly impressive. Four motors – two on the front and two on the rear axle – drive the wheels of the Audi R8 e-tron, making this experimental vehicle a genuine quattro.

Audi Tradition scoops overall win in the Silvretta with blind co-pilot
A team from Audi Tradition scooped its first ever overall win in the celebrated Silvretta Classic race. No other competitor in the race drove with greater precision than Luciano Viaro in the Audi ur-quattro from 1988. Although the multiple Mille Miglia winner was not thought of as an outsider, the remarkable fact is that his co-pilot is blind. Enrico Mussinelli read the roadbook in braille. Audi Tradition has teamed up with Luciano Viaro to support the Italian-inspired M.I.T.E. project, which has set itself the objective of making classic car racing equally accessible to the visually impaired. Viaro will be driving an Audi ur-quattro with blind co-pilots in a total of five events this year.