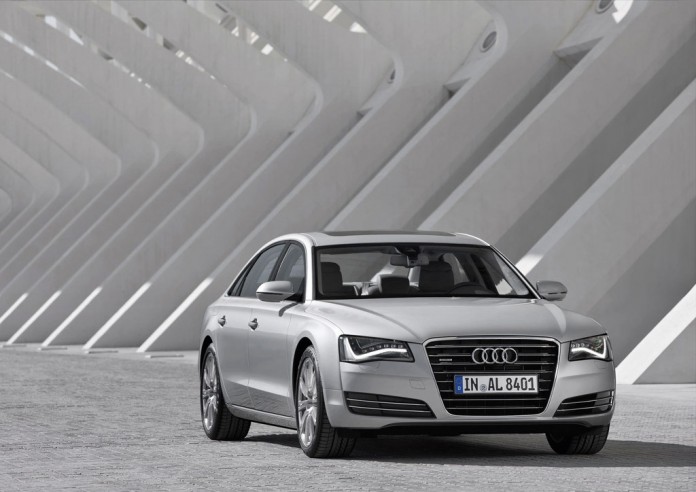 The full-size A8 sedan embodies the Vorsprung durch Technik for which Audi is renowned. The brand now presents the new top version of its flagship: The long-wheelbase A8 L sets standards for luxury, dynamics and efficiency. It will debut in fall 2010 with five engines, including the powerful twelve-cylinder with 368 kW (500 hp).

The Audi A8 L impresses with a presence of powerful confidence – it is a large, distinguished luxury sedan. Length and wheelbase have both been stretched by 13 centimeters (5.12 in) versus the standard version; the A8 L measures 5.27 meters (17.29 ft). All of this added length is to the benefit of the rear seat passengers.

Audi offers two power-adjustable and heated individual seats as an option for the rear, which can be paired with the optional continuous, elegantly-styled center console with large storage compartments. The individual seats can also be equipped with optional ventilation and massage functions, and features such as a folding table and a cool box make the passengers’ stay even more enjoyable. The top version is the relaxation seat with power footrest. It comes complete with every available luxury option, including a rear seat entertainment system.

Audi also offers a number of attractive multimedia modules, including a high-end sound system from Bang & Olufsen and advanced online services. The Audi A8 L is the first automobile in the world to be available with an integrated WLAN hotspot. A UMTS module provides the connection to the Internet.

The interior of the A8 L enchants with its new, light lines, with a craftsman’s level of fit and finish and with extraordinary attention to the smallest of details. The comfort on board is first class – from the ambient lighting to the four-zone automatic climate control system.

The Audi flagship combines a new level of technical intelligence with intuitively simple operation. Its multimedia interface (MMI) includes a pioneering innovation: In conjunction with the optional MMI navigation plus navigation system, it has a touchpad. The MMI enables the driver to control many functions intuitively. The navigation destination, for example, can be entered by tracing the letters on the pad with a finger.

MMI navigation plus is tightly integrated with the assistance and safety systems in the new Audi A8 L. It reads the road ahead and provides the data to the control units for the automatic transmission, the headlights and the advanced adaptive cruise control with stop & go function.

With their increased intelligence, these systems can recognize complex scenarios and predictively support the driver. The new Audi pre sense safety system can reduce the severity of accidents and their consequences in many cases. The night vision assistant with its highlighting of detected pedestrians and the speed limit display enhance the driver’s safety and convenience.

Timeless elegance: the design
The Audi A8 L is a sedan of classic, timeless elegance. Its body is an aluminum Audi Space Frame (ASF), weighing about 40 percent less than a comparable steel structure. Audi offers optional LED headlights that use light emitting diodes for all light functions (standard with the W12). These represent a revolution in lighting technology with respect to both the technology and appearance.

The new A8 L is debuting with five engines: two TDI and three FSI gasoline units. All of the engines feature increased power and torque, while fuel consumption has improved considerably: by as much as 22 percent. This is due to Audi efficiency technologies such as the recuperation system and the innovative thermal management.

The transmission also plays a major role in the efficiency of the A8 L. The eight-speed tiptronic has a very high overall gear ratio and is controlled electronically using either the elegant selector lever or paddles on the steering wheel. The quattro permanent all-wheel drive has a distinctly sporty and rear-biased character. The optional sport differential dynamically distributes the forces between the rear wheels; this feature is standard with the A8 L 4.2 TDI.

The new A8 L offers both luxurious ride comfort and sporty handling. Its wheel control arms are made of aluminum. The adaptive air suspension with controlled damping is standard equipment and is integrated into the versatile Audi drive select dynamics system. The optional dynamic steering completes the range of chassis options.