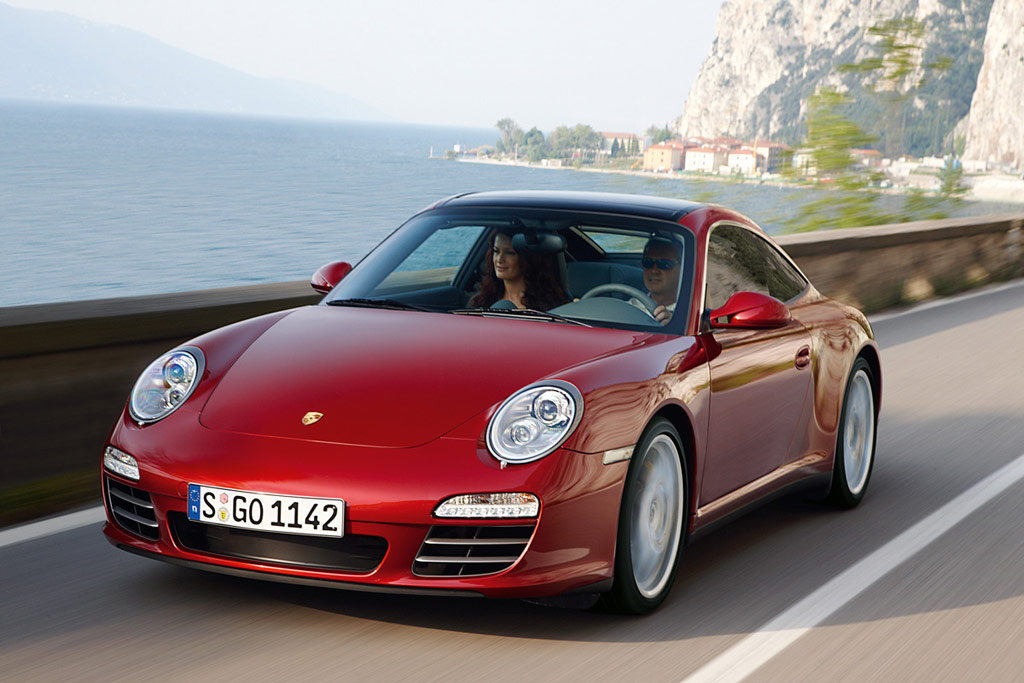 With the introduction of the new 911 Targa this autumn, Porsche is completing the fastest ever generation change in the 911 model series. Two new power units with Direct Fuel Injection (DFI) improve both the performance and economy of the car, the fast-shifting Porsche Doppelkupplungsgetriebe (PDK) – or double-clutch gearbox – replaces the optional Tiptronic S automatic transmission, and electronically-controlled Porsche Traction Management (PTM) takes the place of the former viscous-coupling all-wheel drive system.

Innovative glass sliding roof
The visual highlight of the 911 Targa remains the distinctive 1.54-square metre glass roof made up of two segments; the elegant sliding roof above the occupants and the versatile top-hinged tailgate. When opened completely, the roof slides beneath the tailgate within seven seconds to offer an open space above the passenger compartment of 0.45 square metres. The sliding roof comes as standard with a new electrically-controlled sun-blind, which offers increased shading than that fitted previously. When closed, this spans the entire area of the sliding roof, and can be opened and closed independently of the roof itself. The glass roof and the tailgate are manufactured from specially-treated glass designed to deflect the sun’s glare, thereby protecting the occupants even in bright sunshine from UV radiation and excessive heat.

Porsche Traction Management (PTM)
As their designation implies, the 911 Targa 4 and Targa 4S remain exclusively available with four-wheel drive. For the new generation models, the all-wheel drive is now provided via electronically-controlled Porsche Traction Management (PTM), which replaces the viscous multiple-plate clutch arrangement fitted previously. The superior PTM system was first developed for the 911 Turbo and has been modified for the Targa models. The transmission delivers an even higher level of driving stability, traction and agility, further enhanced by the mechanical limited slip differential also now fitted as standard to the rear axle.

PTM feeds exactly the right amount of engine torque in each situation through an electronically-controlled multiple-plate clutch to the front wheels, supplementing the flow of power to the rear wheels. Combined with the highly dynamic PTM control system, this clutch precisely delivers a distribution of power and torque to the front and rear axles as road and driving conditions change. With the previous viscous clutch, up to 40 per cent of torque could be directed to the front axle. In contrast, the new electronically-controlled PTM system delivers an infinitely variable torque split, and is able to distribute up to 100 per cent of traction to the front or rear wheels.

PTM provides a faster and more precise transmission of power in all driving situations, and this offers not only excellent stability at high speeds, but also increases further the level of responsiveness of the car to the driver.

New engines with Direct Fuel Injection (DFI)
The 911 Targa 4 models share their all-new flat-six engines with Direct Fuel Injection (DFI) with the sister models in the next generation 911 line-up. With the launch of the new 911 Carrera model series, Porsche is introducing direct fuel injection in the company’s range of sports cars. The advantages are an increase in engine power by up to 8.5 per cent, a reduction in fuel consumption by 11.2 per cent, and a decrease in CO2 emissions by 13.6 per cent, depending on the respective model and its features. Specifically, output of the 3.6-litre power unit is up by 20bhp to 345 bhp (254 kW). The improvements on the 911 Targa 4S with its 3.8-litre power unit are equally significant, with maximum output up by 30bhp to 385 bhp (283 kW).

The driver benefits from a further advantage of direct injection every time he touches the throttle pedal: with fuel being injected fractions of a second prior to combustion, the engines respond more directly and spontaneously to even the slightest movement of the driver’s right foot. This is not only the case when accelerating, but also when lifting off the throttle, for engine speed drops more quickly and smoothly since there is no residual fuel left in the intake manifold which might otherwise prolong the combustion process.

Porsche Doppelkupplungsgetriebe (PDK)
The new generation 911 Targa 4 and 4S are available for the first time with the new Porsche Doppelkupplungsgetriebe (PDK), literally Porsche double-clutch gearbox. Offering no less than seven forward gears, the new gearbox combines the driving comfort of a torque converter-equipped automatic transmission with the dynamic manual gearshift functionality of a sequential racing gearbox. PDK also boasts an entirely automatic gearshift function, and replaces the Porsche Tiptronic S automatic transmission offered previously. Through its optimised and adaptive gearshift programmes, PDK further improves the acceleration of the 911 and reduces fuel consumption to an even lower level.

The gearshift perceived by the driver comes not from the gears actually changing, but from the change of positive clutch engagement. In this case, the clutch on one transmission opens or disengages while the clutch on the other transmission closes or engages in a simultaneous process. The big advantage is an even faster gearshift than with a conventional manual gearbox or torque converter automatic transmission. The gears are already ‘in mesh’ when shifting and the power of the engine need not be interrupted in the process.

PDK also reduces to a minimum transmission power loss courtesy of the high standard of mechanical efficiency in the double-clutch, and this manifests itself in fuel economy improvements of approximately 13 per cent compared with a conventional Tiptronic S transmission. PDK also offers an advantage in terms of weight – despite two additional gears, it weighs 10kg less than Tiptronic S.

To use the various functions of the double-clutch transmission, the driver can either shift gears by means of sliding toggles on the spokes of the new steering wheel, or via the new gear selector lever. The driver can press forwards to shift the gears up, and press them from behind to shift downwards. Alternatively, pushing the gear selector lever forwards shifts up a gear, and pulling it back shifts down. The option of PDK costs £2,338.

This PDK gearshift principle was first developed by Porsche for motor sport 25 years ago. Porsche works drivers benefiting from this technology were able to accelerate faster than their competitors and keep both hands on the steering wheel while changing gears, thus avoiding even the slightest distraction while shifting.

The seven-speed PDK shifts gears up to 60 per cent faster than a conventional automatic transmission, and naturally, gives the new 911 Targa models even better performance.

For example, with the manual six-speed gearbox, the 911 Targa 4 accelerates to 62mph (100km/h) in 5.2 secs and the even more powerful S-model completes the same exercise in 4.9 secs. The optional Porsche Doppelkupplungsgetriebe shifts gears even faster to set an even higher standard, the 3.6-litre Targa 4 with PDK accelerating to 62mph in exactly 5.0 secs, the Targa 4S offering an even faster and more dynamic 4.7 secs.

And those in search of optimum driving dynamics have the option to combine PDK with Sport Chrono Package Plus, now featuring Launch Control.

Evolutionary Styling
As with the second generation 911 models series overall, these latest 911 Targa models are distinguished by the discreet modification of the nose and tail and the use of new lighting technology. All 911 Carrera models feature, as standard, bi-xenon headlights and new LED daytime driving lights. Dynamic Cornering Lights are available as an option.

Like the 911 Carrera 4 and 4S models, the Targa 4 and 4S is 44mm, or 1.73”, wider across the rear wheel arches than the two-wheel drive 911. Further definition and character is added courtesy of a new reflective trim that spans the width between the LED rear lights.

Porsche Communication Management (PCM)
Inside the 911, the new Porsche Communication Management (PCM) centre console with its larger, touch-sensitive screen improves operation of the audio system and optional satellite navigation to an even higher standard. And a further important point is that PCM is now compatible with Bluetooth, USB and iPod requirements.

Fitted to every 911 is a Porsche Vehicle Tracking System (VTS), a sophisticated vehicle security package approved to Thatcham Category 5 standard, and customers will also be able to explore the potential of their new car on a Porsche Driving Experience course.