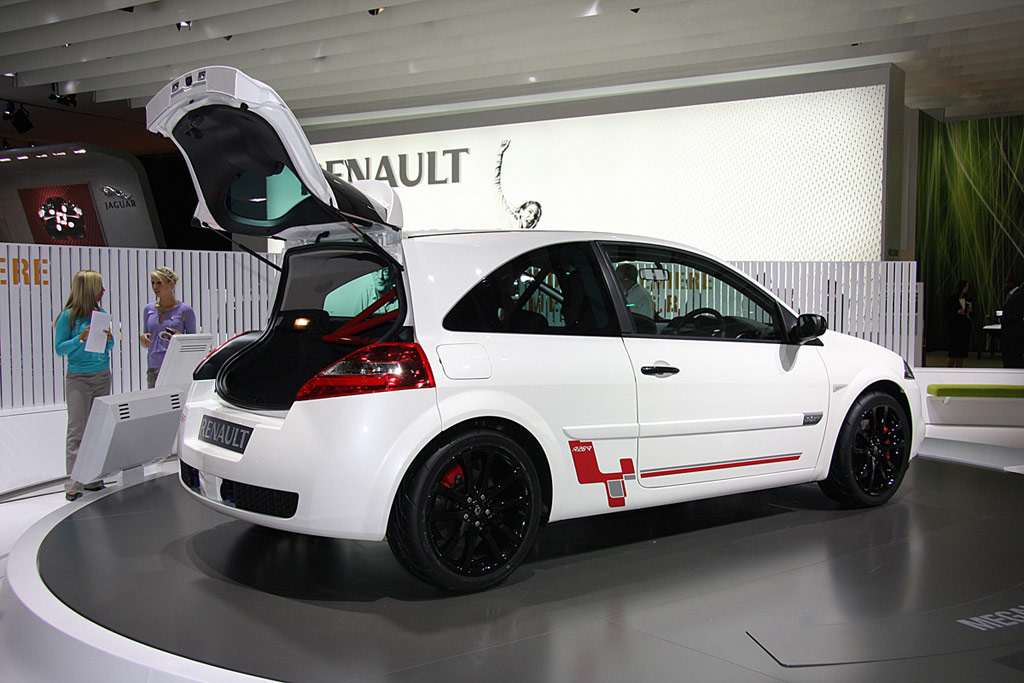 The launch of this ultimate version underlines Renault Sport Technologies’ role as a leading manufacturer of high performance cars.

Mégane R26.R has been developed to:

Renault Sport Technologies have given the Mégane R26.R visual differences that mark out the car at first glance. The carbon fibre bonnet and new 18” alloy wheels in red are the main visual clues together with a new rear spoiler, plus R26.R decals and logos and tinted polycarbonate in place of glass in the tailgate and rear side windows. The car is available in seven colours, two of which are new to the Mégane, Racing Blue and Renault i.d. Lunar Grey and one is brand new, Renault i.d. Pearlescent White.

Inside the R26.R the atmosphere is as radical as the outside. Competition seats with a carbon fibre shell are supplied by Sabelt who also supply the six-point harnesses, the first time that this form of restraint has been homologated in a production car. Conventional lap and diagonal seat belts can be fitted as an accessory. No rear seat is fitted. The steering wheel and gearlever gaiter are in leather and suede. A plaque shows the production number for each country:

To improve the power to weight ratio, the Mégane R26.R has been on a strict diet, losing 123kg compared to the standard R26. This has been achieved by the removal of:

Other new elements are:

A chassis without compromise

The suspension and brakes have been optimised to make the most of the new, lighter weight and to provide maximum performance. The front independent suspension is maintained but with the following new parts:

A performance car needs brakes that are both powerful and fade-resistant. The Mégane R26.R has large 312mm ventilated discs at the front with Brembo four-piston callipers that provide stopping power at the highest level. To resist fade, the discs are grooved as opposed to drilled.

The R26.R takes its engine and gearbox from the Mégane Renaultsport 230 F1 Team R26. This develops a peak power of 230hp and torque of 310Nm. A characteristic of this engine is the wide power band, with 90% of the torque available from 2000 to 6000rpm.

However, to reduce the gear change time, a short-shift gear linkage is fitted.

On 23 June, the Mégane R26.R established a new lap record for a front wheel drive production car of the Nürburgring circuit with a time of just 8 minutes 17 seconds. To commemorate this exceptional level of performance, the circuit outline and lap time is etched into the rear side windows.

The Mégane R26.R is unveiled today, 22 July, in London at the British International Motor Show and goes on sale in October limited to just 450 examples in total.