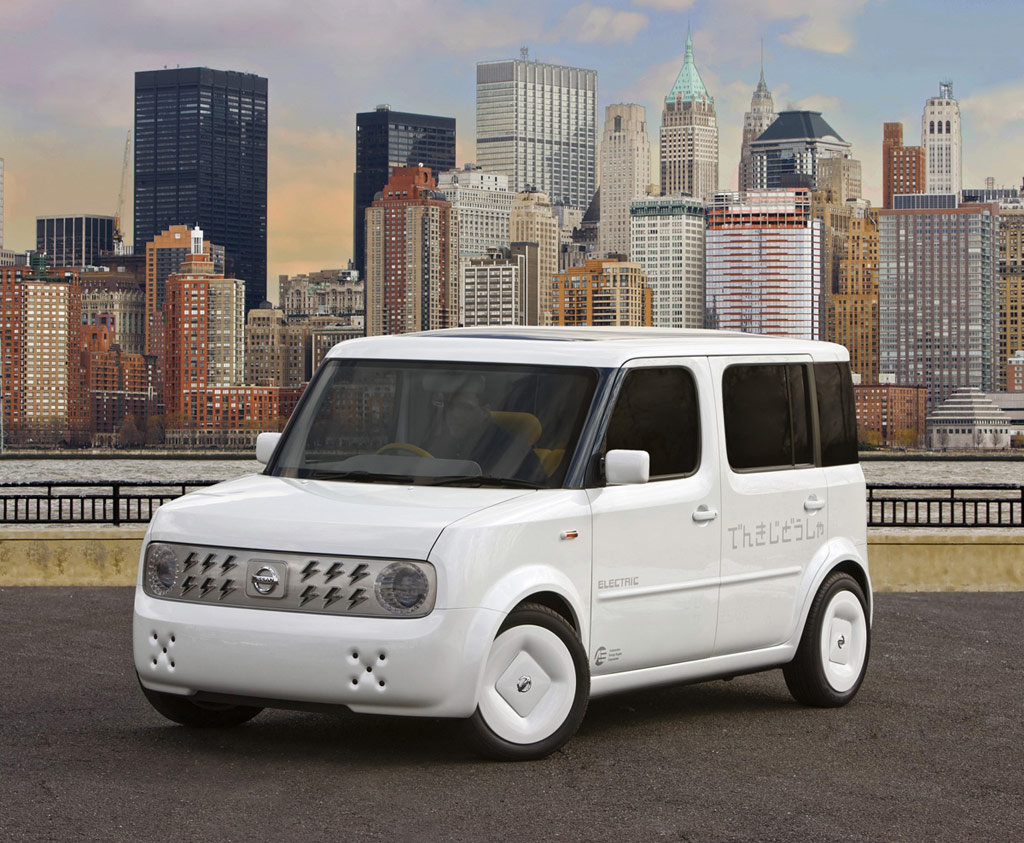 As one of the company’s most popular products, the Nissan Cube has become a familiar sight on Japanese streets and something of an icon thanks to a styling approach that keeps curves to a minimum. Now visitors to the British International Motor Show will be able to see the Denki Cube Concept, a development of the production model that has been created to showcase Nissan’s technical leadership in electric-powered vehicles.

Unveiled at the New York Motor Show earlier this year, the Denki Cube is powered by the latest state-of-the-art EV technology which is likely to be seen in a Nissan production vehicle within a couple of years.

Square, white and very green
Visually both the concept car and the production model on which it is based shun superfluous curves in a desire to maximise interior space. But while the square proportions are very much the antithesis of traditional automotive style, the Denki Cube isn’t bland and has an undeniable warmth and charm to match its outstanding practicality.

The design also flies in the face of conventional thinking with asymmetrical rear end styling in which the tailgate glass completely wraps round the nearside rear corner to merge into the rear side windows.

At the front a distinctive metallic-finish front grille features a series of lightning bolt cut-outs and the AC power charging port. An equally distinctive headlamp design incorporates an array of LEDs around the circumference and a main light with an electric discharge effect.

At the rear the taillights are ‘hidden’ behind a series of holes punched into the bumper in the style of the five dots on a dice – a design motif that is used throughout the Denki Cube.

Inside, the design team have set out to capture the sense of a social hub on wheels, offering the same degree of relaxing comfort as the favourite room in the owner’s house might. Just two rows of seats compared to the standard Cube’s three and a full fixed glass panel enhance the sense of spaciousness, while a wheelbase increased by 9.4 inches provides the extra space necessary to accommodate the battery pack.

Bright, translucent plastics characterise the unique steering wheel and fascia with a computer graphic-style display and a series of large buttons to control the transmission.

They are also safer to operate thanks to the use of a chemically stable spine-structured manganese for the electrode material. Consistent performance delivery has been demonstrated over average runs of more than 100,000 km and AESC is working to dramatically enhance future battery performance and reduce costs further.

“The Denki Cube is a fun approach to the need to provide alternative-fuelled vehicles in a practical package when the costs and impact of motoring are very much in people’s minds,” said Paul Willcox, Managing Director, Nissan Motor (GB) Ltd. “It is undeniably boxy yet at the same time charming, fashionable and functional, and completely in tune with the desire for enjoyable efficiency.”

And its seemingly strange name? All pretty logical really: ‘denki’ is the Japanese for ‘electric’ and ‘Cube’ aptly describes its appearance.

Moving towards practical and affordable pure electric vehicles
The Denki Cube is part of a wider initiative by Nissan to move towards a zero-emission motoring future, encapsulated within the Nissan Green Program 2010. The Renault-Nissan Alliance has already announced it will mass-market electric vehicles in Israel and Denmark in 2011, moreover, Nissan recently announced plans to sell a purpose-designed electric vehicle in North America and Japan by the end of 2010 before rolling out sales to Europe by 2012.

As well as the Denki Cube, other electric vehicle concepts have included the Mixim, a sporting four seater developed to appeal to the new generation of ‘computer kids’ which first appeared at the 2007 Frankfurt show; and the amazing Pivo featuring a 360 degree rotating cabin which removes the need for a reverse gear and makes parking simple.

Nissan first developed an electric vehicle as long ago as 1947 and, more recently, has produced a small run of pure EVs – the Hypermini – for real world testing in selected Japanese cities.

Furthermore, in a second strand of development, Nissan is intensively researching fuel cell vehicles. The pioneering X-Trail-based FCV, with a Nissan developed fuel cell stack, high pressure hydrogen tank and compact lithium-ion battery, has been undergoing real world testing for more than two years with examples in everyday use in Japan and North America.

A cutaway model of the FCV is on display in the Green Pavilion at the British International Motor Show, enabling visitors to see how the fuel cell, battery and hydrogen tank are stored within the vehicle and providing them with an insight into how their own car may look and drive in the future.