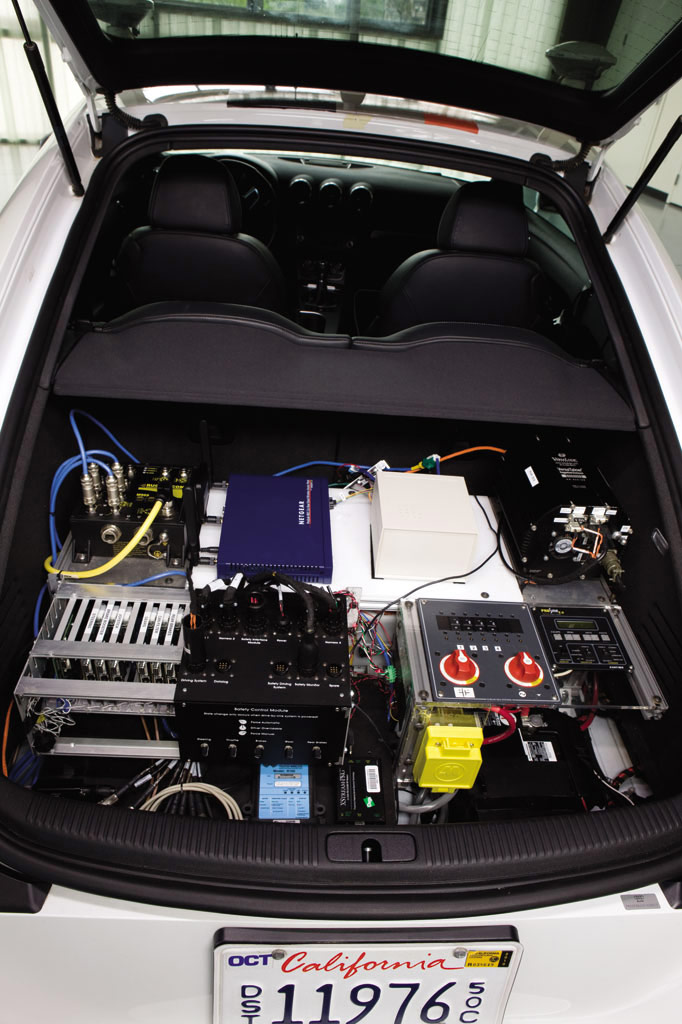 Audi launched a bold new design for the Autonomous Audi TTS Pikes Peak, as research surrounding the car that can drive itself enters a crucial stage before high-speed test runs up Pikes Peak in Colorado this fall.

With the changed appearance, the Autonomous Audi TTS Pikes Peak is now squarely aligned with Audi cars that made motorsports history a generation ago in the Pikes Peak Hill Climb and other rally racing events.

The new emphasis for the project also honors quattro® technology, which has played an instrumental role in Audi racing successes, has served as a leading example of the progressive engineering found in Audi passenger vehicles and is integral to the handling of the Audi TTS research car. This year marks the 30th anniversary of quattro on the world automotive stage.

The challenge and heritage of Pikes Peak
The association between Pikes Peak and this research project relates to the original goal of developing advanced algorithms and actuation systems that would allow a car to complete a driving course without a human behind the wheel.

The partners in developing this technology – the Stanford University Dynamic Design Lab (DDL), the Electronics Research Lab (ERL) for the Volkswagen Group in Palo Alto, Calif., and Oracle Corp. – chose the part-pavement, part-gravel route of the storied Pikes Peak race to prove the project’s capabilities.

“Our aim from the start has been to show how the future of driver assistance technologies will lead to dramatic improvements in traffic safety and saving lives,” said Dr. Burkhard Huhnke, Executive Director, ERL. “With this project we are working on electronics that will help drivers steer their way out of dangerous situations. But first we need to create programs that would replicate the quick decisions and rapid maneuvers of the best rally racers under the most difficult road conditions.”

The connection with rally racing provided another key inspiration to the project team.

“Many of the leading automotive technologies we see in our cars today evolved out of motorsports,” said mechanical engineering Associate Professor Chris Gerdes, director of the Center for Automotive Research at Stanford, in Palo Alto, Calif. “This is because racing pushes emerging technologies to the limits before they can be adopted more broadly.”

The Autonomous Audi TTS Pikes Peak is based on a street-ready Audi TTS sports car. The team chose the TTS because its native systems, including a drive-by-wire throttle and a semiautomatic DSG gearbox were a good fit with the electronics that allow the car to drive without human input.

The computing hardware added to the TTS research car isn’t significantly more elaborate than what can be found in a standard laptop. The car currently uses two computers in its trunk – one running safety critical algorithms using Oracle’s Real Time Java (Java RTS). The other runs vehicle dynamics algorithms. The two sets of algorithms are what enable the TTS to drive at the limits of handling on a variety of surfaces, speeds and conditions.

The differential GPS system is capable of keeping the TTS within two centimeters of the center line of a normal course; researchers are planning on a one-meter margin on Pikes Peak due to the extreme conditions.

The Autonomous Audi TTS Pikes Peak gained global recognition last year with a Web video that showcased the car’s ability to execute complex maneuvers on Utah’s Bonneville Salt Flats without a human behind the steering wheel.

In the Pikes Peak Hill Climb, Audi legends were born a generation ago. Audi rally cars, such as the Audi Sport quattro S1 Pikes Peak, employed the all-wheel drive technology to win the 12.42-mile “Race to the Clouds” in convincing fashion. The drivers of those Audi quattro rally cars – Bobby Unser, Walter Roehrl and Michele Mouton – earned places in motorsports history at Pikes Peak. In fact, the researchers from Stanford and the Volkswagen Group’s Electronics Research Laboratory in Palo Alto, Calif., nicknamed the project “Shelley” after Mouton and her racing exploits.

Design challenge – combining the past and the future

Tying the Audi traditions into a look for the Autonomous Audi TTS Pikes Peak became an engaging assignment for Audi designers at the company’s Design Center California in Santa Monica. Several options emerged, including an art car look that depicted the Pikes Peak route in a topographic map covering the body of the TTS.

For the design that was selected, the goal was to pay homage to the past, while conveying the leading-edge technology that defines the TTS research car. Designers decided to give the rally car themes from the 1980s a forward-looking twist, said Sangyup Lee, Chief Designer (Group Exterior) at VW/Audi Group Studio California.

The original rally cars, for example didn’t feature a large four rings logo on their roofs. But the designers used that design cue from modern Audi DTM racing cars in Europe so the brand image would be evident in aerial photos and videos.

“We were very much inspired by the Pikes Peak race cars,” noted Raul Cenan, Lead Designer on the TTS project. “But there was very different technology used in those cars overall. So we decided to go with more modern elements that were heritage-inspired.“

During testing the Pikes Peak course would be divided into segments, which the TTS research car would drive at progressively increasing speeds. Certification of the testing would be done by an independent motorsports organization. Later in the fall, also weather permitting, the Autonomous Audi TTS Pikes Peak plans to make a Guinness Book of World Records land speed attempt at the El Mirage Lake dry-lake bed in southern California or another nearby location.

Officials from the Guinness Book would certify whether the TTS research car can establish a record in the new category of fastest speed in an autonomous vehicle.