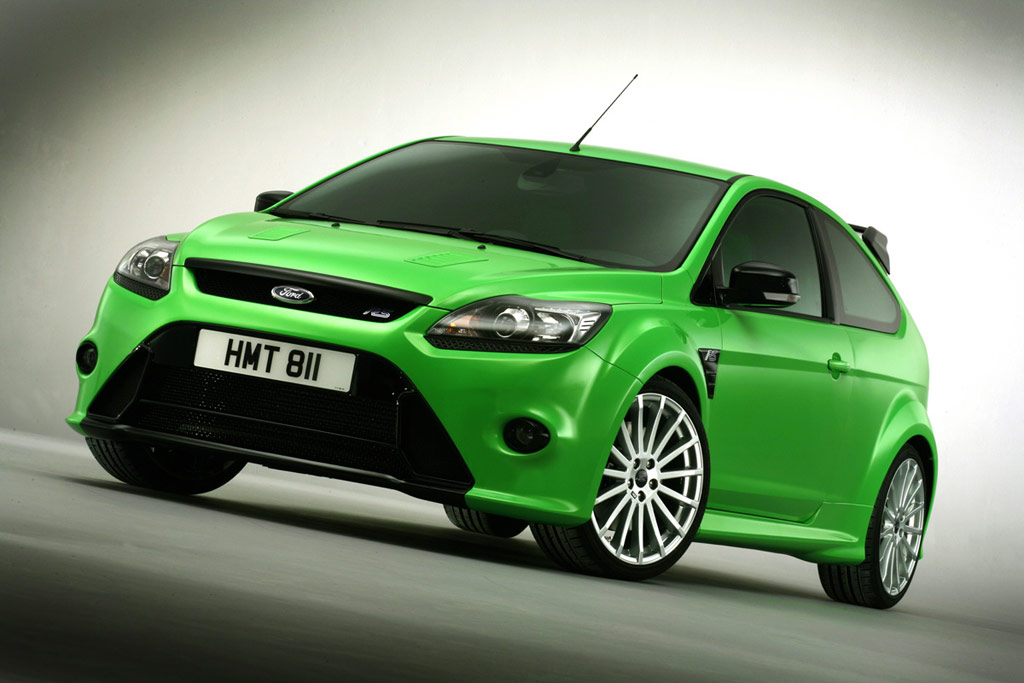 The legendary Ford RS performance car brand is returning in the shape of the exciting new Ford Focus RS, which will be previewed on July 22 at the 2008 London International Motor Show.

The new Focus RS will go on sale in early 2009 and is being created by a small team of dedicated engineers, under the direction of Jost Capito, Ford of Europe’s Vehicle Line Director for Performance Vehicles.

For performance road car enthusiasts, the new model will mark a welcome return for the Ford RS badge. This will be the second Focus model to carry the RS mantle and promises another exciting chapter in an exciting 40-year story that began in Germany in the late 1960s and gained momentum across Europe with the launch of the 1970 Escort RS1600.

Capito said: “We want the new Focus RS to be a serious high performance car – as much a car for driving enthusiasts as the one before it and classic Ford RS models of the past. We’re staying true to the core RS principles of an exciting, yet affordable performance road car you can live with every day.”

Before it even turns a wheel, the new Focus RS exudes the presence, sporty style and lowered, ‘meaner’ appearance expected of a genuine Ford RS. Overt performance styling details mix with subtle revisions to create a planted, powerful stance and the promise of an exciting drive.

The London show car previews the design intent for a final production vehicle, though as development work continues, some final details may change before volume production begins.

The vehicle is finished in a special bright green paint with inlaid metallic flake, a striking, modern interpretation of the 1970s Le Mans Green of the Escort RS1600 era.

The vibrant exterior colour is contrasted with a number of performance styling details highlighted in gloss ‘piano black’, including the strip at the leading edge of the bonnet, the deep housings for the integrated front fog lamps and door mirrors with integrated side indicators.

Front and rear quarter panels have been revised to incorporate wider wheel arches and a wider track, complemented by revised, deeper side rocker mouldings. In another visual reminder of the car’s performance potential, triangular, RS-badged vents sit behind the front wheel arches. Two classic-style bonnet louvres are both a styling hint at the power beneath and a practical requirement, maintaining correct system temperatures.

The completely new front bumper design for Focus RS incorporates a deep front airdam with a large, mesh lower grille in an extended trapezoid. Stylish and practical, this prominent feature represents the latest Ford ‘kinetic design’ face and also is finished in piano black. Above, chromed xenon headlamps stand out like cat’s eyes and are framed by matt-black housings with unique additional vents running underneath.

At the rear, a deep new rear bumper incorporates a large venturi tunnel to its lower edge with small vents at each corner of the bumper, emphasizing the car’s width. Two impressive chromed exhaust tailpipes sit each side of the black venturi, creating a purposeful rear view for the car.

Above, a unique, twin-element, black RS rear spoiler sits at the Focus RS’ roofline, echoing both RS models of the past and the World Rally-winning Focus WRC that has been its inspiration.

“We believe it’s vitally important that a Focus RS looks like both a Focus and an RS – it needs to be individual, distinctive and overt in its performance styling, but it also needs to show a clear progression from and relationship to Focus ST”, said Stefan Lamm, Chief Exterior Designer, Ford of Europe.

Inside, this theme continues with a unique and appropriately performance-oriented interior, dominated by bespoke, sculpted Recaro high-performance sports seats, specially designed and trimmed for excellent support, even when driving enthusiastically. Each is colour-matched to the exterior, with ebony leather accents and ‘RS’ and ‘Recaro’ logos stitched into each backrest.

Elsewhere, colour brings new excitement to the Focus interior, building on the sporty interior theme of Focus ST with more use of accents matched to the exterior colour, brushed aluminium highlights and overt performance styling. Even the rear seats feature higher side bolsters and a microfibre finish to echo those up front.

The driver is reminded this is a special Focus at every touch, with a gear lever finished with a six speed gear shift graphic in RS blue, a sporty, three-spoke steering wheel, finished with ‘Ford’ and ‘RS’ logos and even aluminium foot pedals. The performance driving environment is completed by three additional gauges from the Focus ST, including turbo pressure, sitting atop the centre console and angled toward the driver’s eyeline.

At the heart of the all-new Focus RS is a specially developed, turbocharged version of the Duratec 2.5-litre 5-cylinder engine. Significantly revised for high performance, this powerplant is targeting an impressive power output of 300PS and over 410Nm of torque, contributing to an excellent power-to-weight ratio.

Such significant increases are not simply the result of altering engine management or boost pressure: starting with the Duratec 2.5-litre block, Ford RS engineers developed unique camshafts, a revised cylinder head and gasket and revised intake and exhaust manifold system for the car.

Although the car is still in development, prior to its launch in early 2009, early performance testing indicates a 0-100km/h (0-62mph) time of under six seconds.

Throughout Focus RS’ development, Capito and his team have been keeping a sharp focus on creating a car that delivers excellent performance and traction.

Various innovations, developed as a result of customer feedback from previous performance Fords, have allowed engineers to keep the new Focus RS as front-wheel drive, with a limited-slip differential, while still achieving demanding targets for traction, handling and steering.

The new Ford Focus RS is equipped with an innovative front suspension system known as a ‘RevoKnuckle’, which is designed to reduce unwanted steering disturbance and torque steer, the impact of torque on steering in front-wheel driven vehicles. Torque steer occurs during hard acceleration, cornering or driving on uneven surfaces, when torque on the driven wheels exceeds grips levels. It is characterised by sudden turning force on the steering wheel and can be exacerbated by vehicles with wide tyres and limited-slip differentials.

In Focus RS, the RevoKnuckle works in conjunction with a Quaife Automatic Torque Biasing limited-slip differential. Ford Team RS engineers have worked closely with Ford’s Advanced Research Centre in Aachen, Germany to develop the RevoKnuckle technology specifically for the high performance Focus RS. It allows the simplicity of a traditional McPherson strut arrangement, but with geometry settings that minimize steering disturbances and torque steer, principally a reduction in steering offset.

“As you would expect, we gave all-wheel-drive careful consideration, but by combining and tuning these elements and learning from Ford’s expertise in industry-leading handling, we have managed to eliminate the weight of AWD from the car and still have been able to target a class-leading balance of traction, handling and performance.

“The result is a lightweight set-up, that will deliver the right blend of traction and razor sharp controllability – in a way no one would have expected from front-wheel-drive, and we believe we have made the right choice,” Capito concluded.

A genuine Focus RS must maintain and enhance the reputation for responsive, precise handling for which Focus is acclaimed and considerable engineering effort has ensured that the new Focus RS will do just that.

Driving quality developments for Focus RS include a 40mm wider track, stronger, longer driveshafts, revised springs and dampers and a thicker, longer rear anti-roll bar. At the same time, the steering system has been retuned to provide an even sharper steering response and very precise feedback.

A special version of Ford’s ESP system has also been developed for Focus RS, designed to allow a very sporty driving style before activating. Intensive work to refine the natural handling abilities of the car has allowed the ESP system to carry a full de-activation option for enthusiast drivers and especially for track use.

“We are refining all the handling characteristics of Focus RS without ESP, to hone its natural responses, rather than use ESP to help its handling. In Focus RS, ESP is a pure safety device”, explained Capito.

In creating the new Focus RS, Ford’s Team RS engineers have had to meet the same stringent targets for durability and reliability as those set for the rest of the Focus range.

Despite its many bespoke engineering and styling elements, Focus RS will be built entirely on the main Focus production line in Saarlouis, Germany and offered with a standard Ford of Europe warranty.

The new Focus RS represents a significant moment in the heritage of both the Focus and Ford RS brands.

It is 10 years since the Ford Focus was first revealed to the world at the Geneva Motor Show in 1998, paving the way for a range of Ford vehicles whose exciting design was matched by class-leading driving quality. Since this time, more than 5.3 million Ford Focus models have been built in Europe, including Russia, with the car also built and sold in North America and Asia.

At the same time, the new Focus RS marks the return of the famous but rare Ford RS badge, last seen on the first-generation Focus RS in 2002 and with a distinguished heritage stretching back 38 years including Fiesta, Escort and Sierra models.

“RS is uniquely important to us in terms of our performance heritage and World Rally Championship success, while the Focus has played a major part in establishing Ford’s excellent reputation for driving dynamics,” said John Fleming, Ford of Europe President and CEO. “The all-new Focus RS will embrace and celebrate both of these – it will be a genuine RS and a genuine Focus and I’m confident it won’t disappoint in either area”.