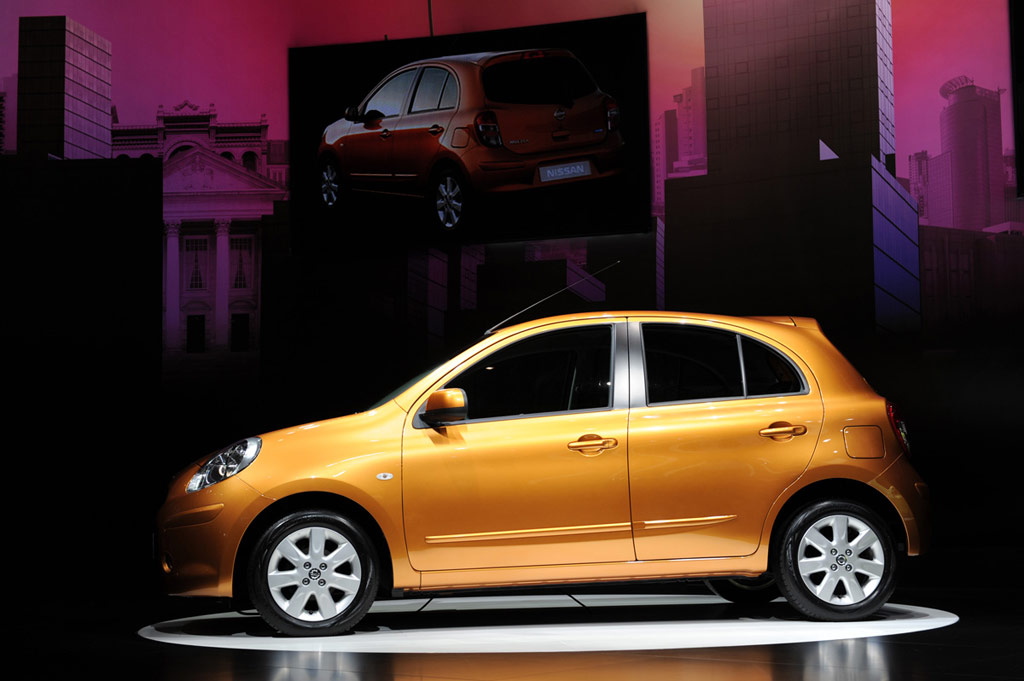 Boasting breakthrough packaging and small-car engineering, the all-new, fourth generation Nissan Micra (known as March in Japan) is on course to create a whole new set of industry standards. Unveiled today at the Geneva Motor Show, the Micra has consistently won praise and success for in Europe, Japan and other markets, gaining a reputation as a reliable, stylish, accessible compact car enjoyed by a wide cross-section of customers. The new Micra has been designed to build on that trend – in 160 countries.

“Combine 25 years’ experience of designing compact cars for city driving… with a totally new, versatile platform and Nissan production know-how… and the result is modern, simple and destined to be a serious competitor on the world stage, ” said Carlos Ghosn,, during the car’s reveal.

Developed and built on Nissan’s all-new V-platform, which was developed under a comprehensive new production engineering process, the new Micra was designed and tested in Japan to be built in at least four overseas locations, and fine-tuned to meet the differing tastes and needs of customers in 160 countries worldwide. Breaking with traditions that focused on launching production in established markets like Europe and Japan, Nissan will base production of the new Micra at overseas manufacturing sites such as Thailand, India, Mexico and China.

“The car has to charm a global audience,” comments Makoto Yamane, Associate Product Chief Designer. “Its face had to look stylish and have an air of sophistication to it. ” A unique design feature of this car — its double-layer integrated grille — meets these requirements. But the car’s classic shape was also crucial. That’s why it also employs a stylized version of the distinctive arched side window line, something that is central to the Micra’s heritage, identity and appeal in Europe and Japan.”

Retaining its compact dimensions, the new car is slightly longer and marginally lower, while its longer wheelbase enables a ‘wheels-at-each-corner’ stance, the main reason behind the Micra’s roomier interior. The boomerang-shaped grooves on the roof have a clearly defined purpose too, continues Yamane. Aiming to create the same sense of exterior style inside the car, Nissan has employed a ‘connected cocoon’ design featuring a dashboard design which takes on a ‘twin bubble’ theme. This refers to the circular instrumentation binnacle and the similarly shaped glovebox compartment on the passenger side.

All-new Engine and CVT
In Europe, a simple engine line-up sees just two engines options – both are variations on Nissan’s all-new naturally aspirated HR12 1.2-litre, 3-cylinder petrol engine. Inheriting its DNA from the HR16 4-cylinder engine powering the Note and Qashqai, the new engine employs valve-timing control (VTC). Power is rated at 59kW (80ps, while torque output is 108Nm. At only 115g/km, CO2 emissions for this version are world-class.

In addition to the new normally aspirated engine, Nissan will also offer a supercharged 1.2-litre direct injection iteration with a start-stop system fitted as standard in Europe. These technological innovations – stop-start reduces CO2 by six per cent – combine to offer spirited performance, with outputs of 72kW (98PS) and 142Nm of torque. Emissions will be just 95g/km, an exceptional achievement for a petrol engine.

Both engine options in Europe are available with either a 5-speed manual gearbox or Nissan’s all-new Continuously Variable Transmission (CVT). The wide gear coverage enables the 1.2-litre engine to achieve the economy of a 1.0-litre as well as brisk acceleration.

Not satisified merely improving performance levels, engineers excelled in developing ride and handling characteristics which combine agility, refinement and poise. Mounted onto Nissan’s new signature V-platform, the suspension has been designed to be both compact, minimizing intrusion at the rear for maximum trunk space, but not at the expense of the car’s on-road dynamics. Particular attention has been paid to bump absorption, meaning that the Micra will ride serenely over challenging road surfaces, not suffer from wallow or float, and cruise effortlessly at highway speeds.

Comfort, function and equipment
In contrast to its high speed capability, the car also has superb visibility and a class-topping turning radius of 4.5m and several new technologies that assist with minimizing CO2 emissions and mileage while at the same time making parking easier.

Globally, equipment levels differ by market, but the new Micra is available with some key technological innovations which are designed to simplify day-to-day life for its owners.

The new Micra is available with reversing sensors and a new ‘parking space measurement’ (PSM) device with three skill levels (amateur, normal and expert) to lessen the burden of parking in tight spaces – a unique feature in this segment, and likely to be a popular innovation in Europe where ‘touch parking’ is a way of life.

Safety
The incorporation of the V-platform is one major factor contributing to the car’s improved impact safety. The car is designed to absorb the forces of a frontal impact, thanks to the sophisticated crumple zones, while maintaining cabin integrity due to its highly reinforced body shell. In Europe, the Micra will be fitted with ABS, dual front airbags, curtain and side airbags, Electronic Stability Programme (ESP) and pretensioner seatbelts as standard equipment.

Simon Thomas, Nissan’s European Senior Vice President for Sales and Marketing, said: “The new Micra will continue to be the benchmark city car in Europe. Its appeal will be enhanced by its unique combination of compact exterior dimensions, with roomy interior, small and efficient engines, and user-friendly technology. Its continued icon status is destined to be be reinforced in its fourth generation.”

Sales of the new Micra will start in Thailand in March and European sales will begin in November this year.