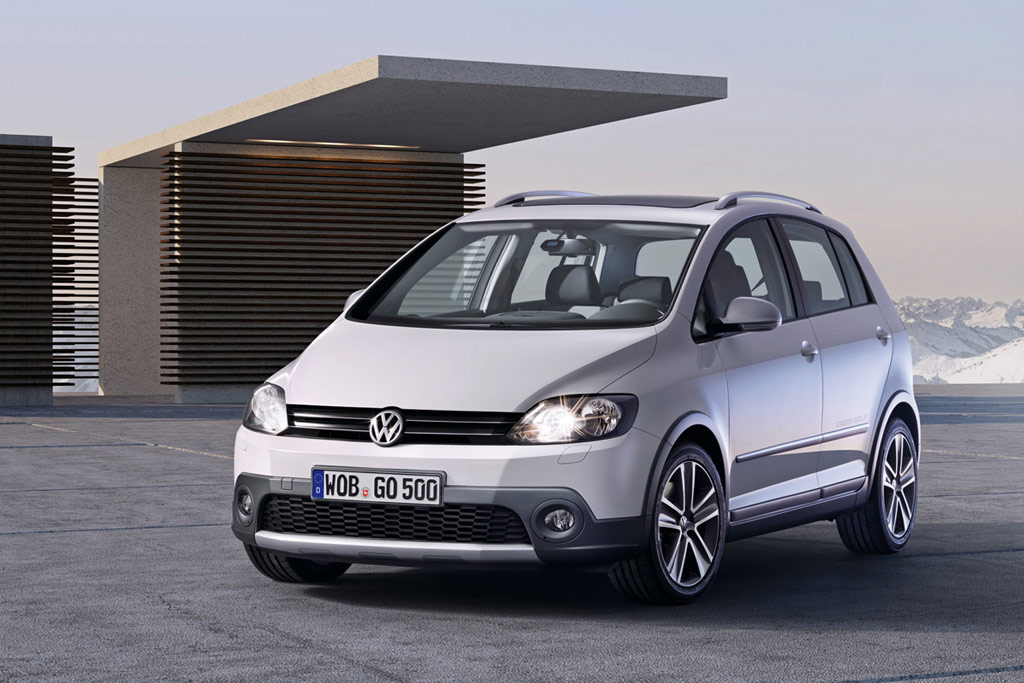 The current Golf model series – the most successful vehicle concept of all times – is now underway in the latest generation and is once again running at full strength on the streets of the world. That is because the new edition of the CrossGolf is debuting in a world premiere at the Geneva Motor Show. With new styling, new TDI and TSI engines and new equipment. After the classic Golf, Golf Plus, Golf Variant, Golf GTI and the Golf R introduced just a few weeks ago, the range covers six very independent models. However, among one another they share the high-tech components of an innovatively conceptualised modular system toolkit. For example, the new CrossGolf, as well as the previous CrossGolf, were developed based on the Golf Plus. The Cross, as an all-around vehicle, bridges the gap between the MPV (Multi-Purpose Vehicle) and SUV (Sport Utility Vehicle); that is, it unifies the variability of an MPV with the ruggedness of a SUV. Common to all of these vehicles is the higher seating position that is in more demand than ever.

Euro-5 engines: pioneeringly economical TDI and TSI
In initial markets, the new CrossGolf will already be available for purchase in April. Buyers of the cleverly designed five-door will be able to enjoy a new generation of engines that offer huge fuel economy advantages. These engines are exclusively direct-injection turbocharged petrol (TSI) and diesel (common rail TDI) engines. They are as agile as they are economical. This is illustrated by the example of the Golf Cross 1.4 TSI with 118 kW / 160 PS: The (from 1,500 rpm) 240 Newton-metre strong turbo- and supercharged petrol engine (Twincharger) enables a top speed of 207 km/h, but when shifted by a 6-speed gearbox it has a combined fuel consumption of just 6.8 litres of fuel (equivalent to 159 g/km CO2). Even compared to the 20 PS weaker TSI of the first generation car, it shows a fuel consumption advantage of 0.5 litres. As an alternative the TSI is available with an optional 7-speed DSG; in this case too fuel consumption is 6.8 litres. Other available TSI engines are the variants with 77 kW / 105 PS and 90 kW / 122 PS.

Automatic gearbox for a new era: DSG for four of five engines
With the exception of the 105 PS TSI, all other engines may be combined with an automatic, the direct shift gearbox (DSG). For the petrol engines and the 105-PS TDI, the 7-speed version is used; in the case of the 140-PS TDI, there is a 6-speed variant specially designed for extremely high torques. In addition, the entire engine range of the CrossGolf fulfils the strict Euro-5 emissions standard.

Cross exterior: New “Design DNA” defines the front end
In its visual appearance, the second generation CrossGolf follows – like all other new models – the new Volkswagen Design DNA. This is reflected especially clearly in the horizontally aligned band of the radiator grille between the headlights that is reflected in the horizontal form of the front bumper. These lines unify the new car with the Cross features now typical for these models.

Compared to the first generation CrossGolf, the rugged all-terrain trim around the vehicle was styled more elegantly, and its lines were adapted to the new Volkswagen “Design DNA”. Similar to the new Cross Polo, the look has been intensively modified – especially in the front area. Integrated on the sides here: the standard front fog lights. In a downward direction, the front end finishes with a cross bar in silver that is visually designed as an underbody guard. On its sides, the new CrossGolf exhibits the typical wheelarch extensions together with body sill trim and door add-ons. Like the front bumper, its rear counterpart is also covered and is equipped with a stylised underbody guard in silver. Its dark painted add-on parts, the CrossGolf whose ride height has been increased by 20 millimetres (standard rough road chassis with 111 millimetres ground clearance) can handle even lighter off-road trips smoothly; at the same time, of course, the trim also protects the car in urban everyday driving.

As is usual on the Cross models, the mirror caps are always painted in silver and therefore the same colour as the underbody guard of the front bumper. Harmonising with them are the likewise standard silver roof railings. The exterior styling is rounded out by chrome accents and “CrossGolf” signature on the side trim as well as new 17-inch alloy wheels (“Budapest”).

Interior: Lots of space in the customised interior
Unmistakable styling and a fresh, friendly ambiance are the hallmarks of the interior of the new CrossGolf. It comes with sport seats (front) including two-tone fabric covers and top stitched seams as standard features. The inner surfaces of the seats and backrests are upholstered in light-grey “Cellular” seat covers with coloured decorative seams. The lateral seat supports and back sections of the seat are offset in “Titan Black”. The backrests of the front seats are equipped with folding trays and storage pockets on the outer sides. The floor mats – decorated with colour seams – upgrade its appearance as well.

In addition, the CrossGolf sports air vents framed in a stainless steel look. Another standard feature: the “small leather package” with three-spoke steering wheel, gearshift lever trim and grip in leather. Last but not least, the new Volkswagen is identified by its new Volkswagen door step inserts with “CrossGolf” signature in the front door entry area and pedal caps in a high-end aluminium look.

Similar to the Golf Plus, the interior of the new CrossGolf is distinguished by a high variability and an especially high seat position. Furthermore, the CrossGolf offers plenty of leg room at both the front and rear seats. And that is not all: Depending on the position of the asymmetrically split, longitudinally adjustable and folding rear bench seat, the car’s cargo capacity may be varied between a minimum of 395 litres and a maximum of 540 litres. When the rear bench backrests are fully folded, this creates up to 1,450 litres of storage volume.

Options that Volkswagen is offering on the CrossGolf include details such as a leather interior (“Vienna” type), bi-xenon headlights with dynamic cornering lights and a rearview camera. Customers who wish to simplify parking manoeuvres will want to order the CrossGolf with Park Assist and leave the steering to their Volkswagen. One of the few details that is not on the CrossGolf is a sport chassis. This is logical, since we’re in a different department here. On the other hand, the Golf GTI and Golf R cannot be had with the 20 millimetres higher rough road chassis of the all-terrain Golf at any price. So thank goodness there the CrossGolf.