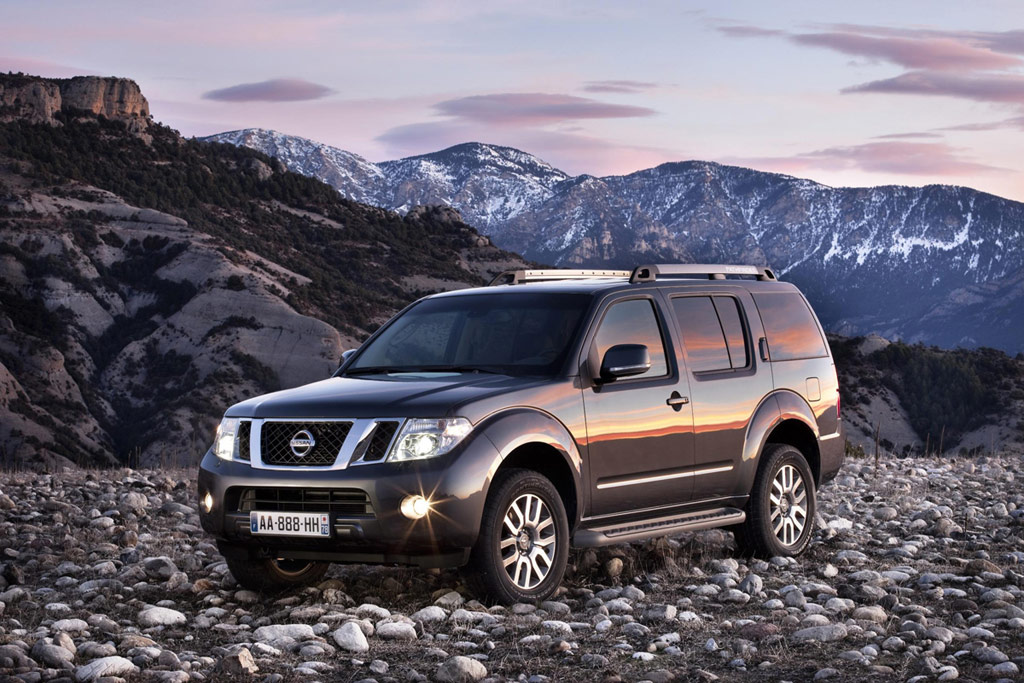 Europe’s best selling pick-up and its SUV sibling since its launch – the Nissan Navara and Pathfinder – have been given a mid-term boost with a number of significant enhancements designed to keep them at the top.

Among the changes are the arrival of a new and technically advanced 3.0-litre V6 diesel engine; important improvements to the popular 2.5-litre dCi diesel; greater levels of passive safety; new equipment including the availability of a state-of-the-art Nissan Connect Premium touch-screen satellite navigation system, a premium Bose sound system and a rear view camera; enhanced interior quality and a number of styling changes to keep Navara and Pathfinder looking sharp.

Together the improvements reinforce Nissan’s premier position in the all-wheel drive market and strengthen both Navara and Pathfinder’s status in a hugely competitive segment.

Launched at the Geneva Motor Show, the improved new-look Navara and Pathfinder models are due on sale across Europe in April 2010. They will be followed two months later by the new 3.0-litre V6 diesel flagship models.

The key element of the new V6 – with an unusual vee angle of 65 degrees – is the material chosen for the engine block. Alliance development engineers chose Compacted Graphite Iron (CGI), a material that offers all the benefits of cast iron, including high levels of stiffness and noise absorption, without the weight penalty. And while CGI is heavier than a pure alloy block there is no need to add stiffening ribs or extra sound deadening material so the weight gain is comparatively modest.

Using experience gained during the development of the Alliance 2.0-litre dCi engine – and carrying over some technology – accelerated development of the new V6, but number of significant changes have been made to the hardware for the V9X. The combustion chamber design, for example, has been optimised to improve the balance between emission levels and fuel efficiency.

The compression ratio has been lowered to 16:1 to benefit not just economy and emissions but also noise, vibration and harshness (NVH), while internal engine friction is reduced by the use of ultra smooth components such as the micro-finished forged steel used for the crankshaft.

Class leading levels of torque and highly competitive specific power outputs are delivered thanks to the adoption of a comparatively large single turbocharger, which is mounted within the vee of the engine, an intercooler, and the use of the latest generation of Bosch common-rail fuel injection. This system incorporates piezo injectors and operates at 1800 bar.

Power output is 170 kW (231PS) while the torque output of 550 Nm leads the class. Better still, peak torque is achieved from as low as 1,700 rpm and is available all the way to 2,500 rpm, while as much as 500 Nm is available from a mere 1,500 rpm. Idle speed is an exceptionally low 650 rpm with none of the vibrations and noise usually associated with a diesel.

The result is strong low-end performance with comfortably refined delivery and exemplary throttle response. In addition, the engine helps provide strong towing performance, the Pathfinder capable of towing a 3500 kg braked trailer with Navara having a 3000 kg limit.

Emissions and fuel efficiency targets included achieving Euro 5 compliance. In addition to the gains made by the changes to the combustion chamber, the V9X engine also incorporates a number of innovative features.

Among these is the adoption of an overcooled Exhaust Gas Recirculation (EGR) system which reduces NOx emissions. The system incorporates an integrated exhaust gas bypass in the EGR cooler which quickly helps to achieve the optimum temperature after start up so that the full cooling capacity can be used. This features a low temperature water circuit for the EGR cooler to reduce still further the temperature of the exhaust gas and lower carbon monoxide and hydro carbon emissions.

Equally significant is the treatment of the tailpipe emissions. The system comprises a metallic oxidation catalytic converter offering lower pressure loss compared to a ceramic system and an exothermic catalyst and a catalytic diesel particulate filter (DPF) in the same container. The latter arrangement works in conjunction with a seventh fuel injector which is positioned in the exhaust.

This is activated while the particulate filter is being regenerated – a process of which the driver is completely unaware – but significantly means the opportunity for unburnt fuel to pollute the engine oil is removed. It also allows the filter to be regenerated in low-load conditions, such as idling, and therefore achieves a high efficiency level under all driving conditions. It also helps stretch oil change intervals to 20,000 kms.

Improved 2.5 four-cylinder dCi
The existing 2.5 dCi four cylinder engine hasn’t been forgotten, however, and significant improvements will cement its position as the most popular engine in the range with improvements to both overall refinement and all aspects of its performance.

Subtle retuning has seen a useful 11 per cent rise in both power and torque figures to keep the engine at the top of the class. Power rises by 19 PS to 140 kW (190 PS) while torque increases by a healthy 47 Nm to 450 Nm.

As well as delivering performance gains, the changes have seen improvements in fuel economy and lower emissions. Over the combined cycle manual versions use 8.5l/100kms – an improvement of 1.3 l/100kms – while CO2 emissions have fallen by 40g/km to 224 g/km.

Exterior changes
The revised models have been given a new look front and rear to differentiate them from their predecessors. Changes at the front include a new bonnet, revised grille and a new bumper assembly. Adding 80mm to the length of both models, the bumper is more rounded and lends a more sporting touch to the cars.

There’s a new headlamp design with distinctive projector styling where Xenon lamps are fitted (Pathfinder only). Headlamps washers now pop-up from beneath body colour moulding in the bumpers. There’s a new 18 inch alloy wheel to complement the existing range of 16 inch (steel and alloy) and 17 inch (alloy) designs. V6 models, meanwhile, are given a discreet V6 badge at the leading edge of both front doors while V6 Pathfinders also gain a new side moulding across the doors.

Changes at the rear of Pathfinder include a new bumper design with squared off edges to give a larger and lower mass for a more stable, tougher appearance.

The existing colour palette is changed to include two new metallic shades for Navara – Electric Blue and Blue Grey – while Blue Grey is added to Pathfinder’s portfolio.

Interior changes
Most of the changes inside the cabin of both Navara and Pathfinder have been designed to boost quality and include new switchgear, revised door trims, new seat fabric, the addition of chrome highlights, revised dials and, depending on the model, the availability of Nissan Connect Premium with a new high resolution touch screen.

Typical of the attention to detail that has helped enhance quality are the door trims which have been changed to improve both the look and feel of the interior and its practicality. The armrests and door pads are more tactile to the touch and their shape has also been altered to make them more comfortable in use.

As well as improving fit and finish, the material used has also been enhanced. Practical touches mean the storage bins can now happily hold an A3 map book as well as a one-litre bottle. The rear door storage bins are now large enough to hold a standard Nissan First Aid kit.

Switchgear changes include a new, easier to use, all-wheel drive command control switch on Pathfinder while the steering wheel controls for the phone and audio are now illuminated. Chrome finishers have been added to the automatic transmission surround and, depending on the model grade, to the instrument binnacle. There’s a new storage box on the centre console with a damped lid while SE and LE versions also benefit from ‘Fine Vision Meter’ dials with a crisper appearance. LE versions of Pathfinder now have the option of black or light biscuit leather trim.

Equipment improvements include a new Speed Limiter, which is incorporated into the existing cruise control system.

Active safety is improved with the availability of Nissan’s Electronic Stability Programme (ESP) on Navara (already available on Pathfinder) which uses sensors to monitor the engine’s ECU, wheel speed, steering angle, plus longitudinal and lateral G and yaw rates to anticipate and control wheel slippage.

Nissan Connect Premium, the brand’s new integrated navigation, communication and music system is an optional extra. Simple and quick in use, the 40GB hard drive-based system has a high resolution touch screen with a 3D Birdview display while the map coverage is now extended to Russia, Turkey and Eastern Europe. A new intuitive multi-function controller is fitted and the system also incorporates RDS-TMS live traffic updates and rich content from Michelin.

There are eight languages available for the menus and navigation system while the voice recognition software can handle seven: English, French, German, Italian, Spanish, Portuguese and Dutch. Optionally available is a Bose Premium Sound system with special speakers and amplification designed especially for Navara and Pathfinder.

The new piece of equipment is a rear view camera. Already available on Pathfinder, it can now be specified on Navara, offering improved visibility when parking especially when the bed is loaded or a hard top fitted.