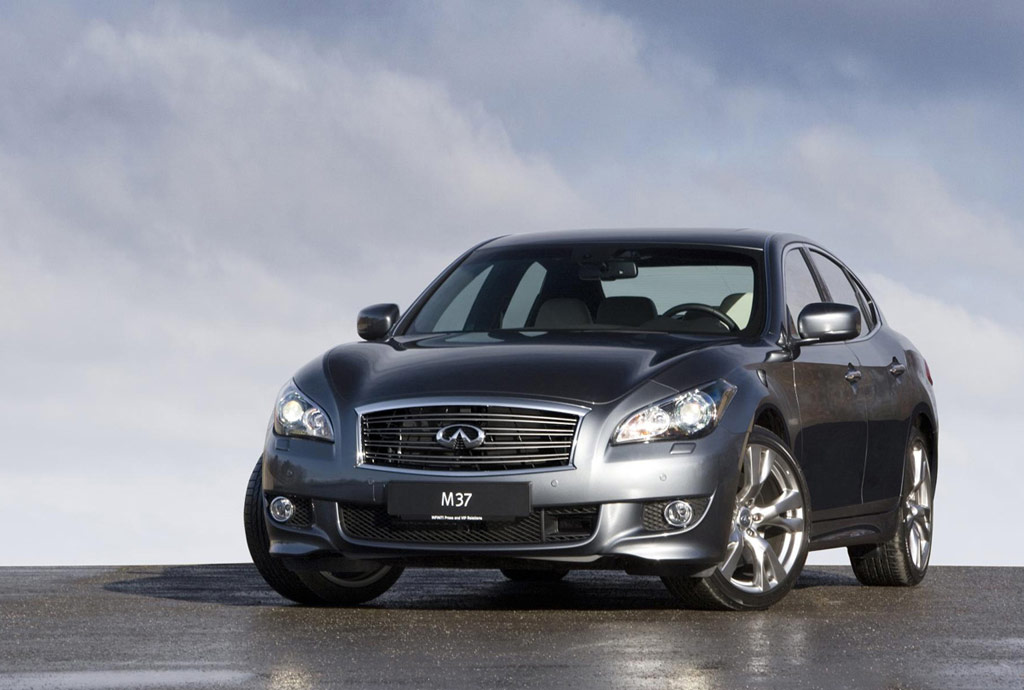 Infiniti, Europe’s newest luxury automotive brand, squares up to the traditional executive car hierarchy for the first time with the European debut in Geneva on March 2, 2010, of the M Line – a powerful, finely crafted, passionately designed alternative to tradition in the performance sedan market.

Petrol or diesel powered, with a hybrid to follow, this latest example of Inspired Performance takes the brand’s unswerving commitment to soul-stirring looks and driving ability up a level, while offering technology unavailable in rivals. New features include Active Noise Control, a world-first side collision avoidance system and state-of-the-art “Forest Air™” climate control. There’s even a smart accelerator pedal that assists the driver in saving fuel. They join a host of proven Infiniti innovations in the M Line, the first M ever to be made available in Europe.

An all-new car, the third-generation M Line has been designed and engineered from the beginning to compete in Europe, with European levels of ride and handling and high performance engines. These include a 3.0-litre diesel V6 for the M30d, which boasts exceptional refinement with 550Nm of torque to rival the class best. The M Line will also be available, in 2011, with an innovative hybrid drivetrain.

Petrol, diesel or hybrid, every new M Line showcases all that is central to Infiniti’s individualistic approach to building cars. The four-door body, 4945mm long, brings a sense of intrigue to Infiniti design DNA with its characteristically seductive lines and sophisticated new take on familiar design cues, many of which draw their inspiration from traditional Japanese arts and crafts.

Classic sports saloon proportions, so clearly at home here on this front engine/rear-wheel drive car, are fully exploited by a body of athletic elegance. Drawing inspiration from the stunning Essence concept sports coupé that made its debut at the Geneva Motor Show one year ago, the M Line design combines vibrancy with presence; like all Infinitis, it is a design that cannot fail to elicit an emotional response.

The design is also notably aerodynamically efficient, both in terms of low drag (Cd: 0.27) and zero lift at high speeds, thanks in part to the distinctive “ducktail” design of the boot lid.

The new M Line is among the most spacious five-seaters in the class, as well as possibly the most alluring on the inside thanks to an even higher new standard of interior design and finish. This is Infiniti’s best-ever cabin, which is saying something for a company known for its sumptuously sporting interiors and emphasis on the best natural materials.

The choice of leather includes a sensual semi-aniline. It is capped by new White Ash wood trim with silver-power finish. Used here for the first time in an automotive application, the resultant real wood grains inside the M Line are more akin to those of luxury furniture or a premium quality musical instrument than a car.

The luxury emphasis is not at the expense of driver focus which is stronger in the new Infiniti M than ever, with ergonomic excellence the hallmark of an imposing new dashboard. No details have been overlooked; the new M Line even introduces a new generation of switchgear, perfectly matched in weight and feel, and a new version of Infiniti’s signature analogue clock.

Just as the design and interior eschew the cold style of rivals for a warmer, more emotional approach, so the new Infiniti M’s abilities on the road are as much the result of human input as that of a computer. The M Line has been developed by drivers for drivers. In particular, the M’s intuitive steering feel is the result of a development program centred largely on feedback from test drivers. Always responsive and unfailingly comfortable – thanks in part to the unusual use of double-piston shock absorbers – the new Infiniti M also delivers the greatly enhanced stability essential for Europe’s more demanding drivers and higher speeds.

The M37 on show at the 2010 Geneva Motor Show is an S model, the most driver-focused of all variants which comes equipped with Infiniti’s proven handling technology with the acclaimed four-wheel active steering (4WAS) system at its heart. All M Line models are based on the FM (Front-Midship) platform that positions the engine low down and far back in the chassis – and thus all Infiniti M versions have a natural balance when it comes to negotiating twisting roads.

All Infiniti M models for Europe are powered by V6 engines, with 320 PS (235 KW) from the 3.7-litre petrol unit, and 238 PS (175 KW) from the new piezo-injection 3.0-litre diesel engine. The M30d has been designed specially for European markets. It is Infiniti’s first diesel and comes with a clear emphasis on sporting performance and luxury car refinement. Its power is a match for single-turbo diesel competitors from Audi, BMW and Mercedes but its torque – 550 Nm (406 lb ft) – is class leading.

The M37 is powered by Infiniti’s charismatic 3.7 V6 with efficiency guaranteed by its VVEL (Variable Valve Event and Lift) cylinder heads. To go with its potent 320 PS is pulling power of 360 Nm (266 lb ft). Both petrol and diesel M Line cars come as standard with Infiniti’s 7-speed Adaptive Shift Control automatic transmission, with manual shift paddles on the S version behind the steering wheel for when the sporting urge takes over.

Being an Infiniti, light weight is central. The M’s doors, bonnet and boot lid are all made of aluminium, as is the all-alloy petrol V6.

The M Line debut marks the availability, depending on model and market, of a suite of new features, all executed with characteristic Infiniti attention to detail and ease of use. Infiniti’s Dynamic Safety Shield technology, the aim of which is to provide a 360-degree “bubble” of protection around the car, takes a step forward with the availability of Blind Spot Intervention™ (BSI). BSI doesn’t just warn of cars in adjacent lanes but actively prevents the car being steered into their path. The available Dynamic Safety Shield package also includes Intelligent Cruise Control with Low Speed Following, Blind Spot Warning in addition to Intervention, Distance Control Assist, Forward Collision Warning, Lane Departure Warning and Prevention systems, and if all that wasn’t enough, it offers Intelligent Brake Assist, too.

Active Noise Control (ANC) ensures the Infiniti M’s cabin, already extensively soundproofed, remains free of unwanted low-frequency engine noises. Sounds of opposite phase are played through the speakers to create a noise cancelling effect – making the cabin an even more peaceful place to be.

The new Infiniti M’s interior environment is also notably cool and calming in versions fitted with what Infiniti believes to be one of the most sophisticated climate control systems ever developed. It is called Forest Air™, after the invigorating, pollution-free atmosphere it seeks to replicate.

Forest Air™ is an umbrella term for six areas of technology, some new, some building on proven Infiniti innovations such as the Plasmacluster ioniser, now more powerful and sensitive than ever.

All-new for this third-generation Infiniti M is an aroma diffuser that subtly scents incoming ventilation air with forest-fresh fragrances, chosen for their specific drive-enhancing qualities. For instance, leaf scent is calming and reduces fatigue, while fragrant wood scent, from the tropical borneol tree, also has a calming effect but in addition aids concentration, important with a car as powerful and dynamic car as the new Infiniti M. The scents alternate and are used intermittently.

Instead of blasting air into occupants’ faces, the Infiniti M delivers a gentle breeze. Air from the dashboard vents is randomly modulated so it feels far more natural, making the whole cabin environment a more pleasant place to be.

Other Infiniti innovations for the M Line include ESP with Dynamic Cornering Enhancement and Infiniti Drive, a system of four driver-selectable modes which tailor the car to give its best in Eco, Sport, Snow and Standard conditions. Eco mode activates the Eco Pedal which exerts a gentle resistance when the pedal is being pushed needlessly hard, wasting fuel. No other car in production has this effective, non-intrusive device to assist the driver in achieving the lowest possible fuel consumption. If the driver prefers not to use it, the Eco Pedal can be switched off.

Apart from being exceptionally well specified as standard in the Infiniti manner, all models in the M Line range will come with the features, often unavailable in rival models at any price, which have already proven highly valued by European Infiniti owners. Every M Line owner in Europe will benefit from Connectiviti multimedia, self-repairing Scratch-shield paintwork and Infiniti’s Total Ownership Experience.

The M Line’s debut in Geneva comes on the back of a growing Europe-wide recognition of Infiniti for offering both rewarding driver’s cars and vehicles which bring a new definition of customer service to the entire buying and ownership process.

The new M Line is the first M to be available in all of Infiniti’s 34 world markets, including Western Europe, where deliveries will commence in September.