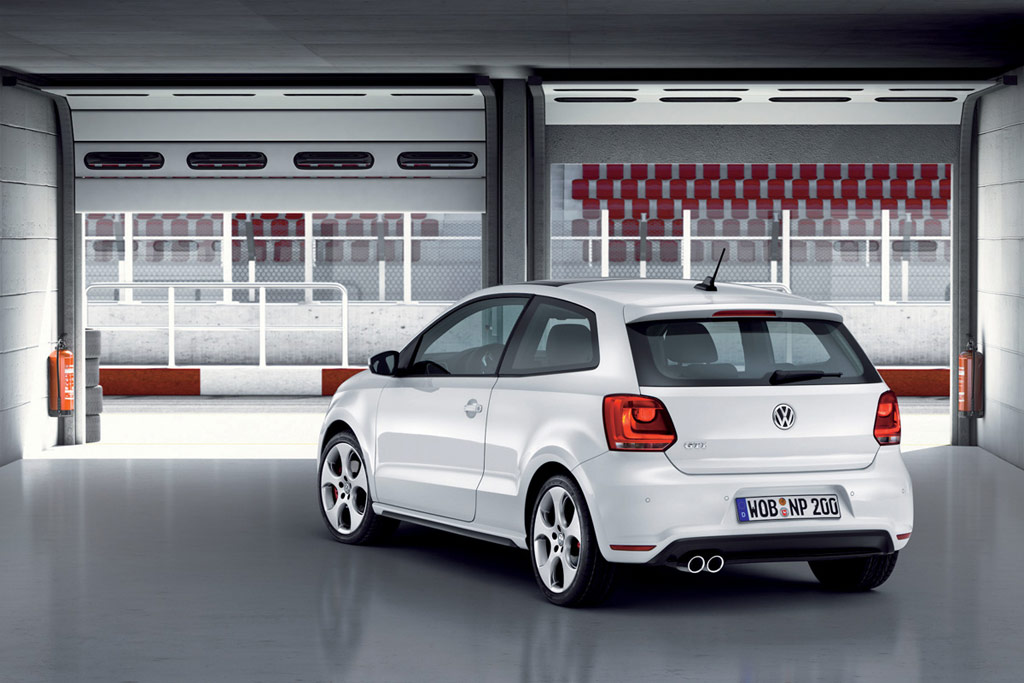 The Polo GTI is back. A powerful 132 kW / 180 PS comeback! This GTI lives up to its legendary name: Superior handling properties unified with uncompromising engine dynamics and a maximum of safety. The list of high-tech features runs through the new Polo GTI like a common theme. Take the engine: This Polo is powered by a new 1.4-litre TSI with petrol direct injection plus turbo- and supercharging. Textbook downsizing. Power is transferred to the front wheels via a 7-speed DSG, which is standard equipment. An electronic transverse differential lock (XDS) reduces the tendency to understeer and especially improves handling in quick driving through curves.

Equipped in this way, the Polo GTI – available in a three-door and a five-door version – is extremely agile and super efficient underway: Weighing 1,194 kg, the Polo GTI accelerates to 100 km/h in just 6.9 seconds and reaches a top speed of 229 km/h. At the same time, it is the most fuel efficient and lowest emitting GTI of all times. Combined fuel consumption: just 5.9 litres per 100 kilometres. That is equivalent to CO2 emissions of just 139 g/km.

By comparison: Its direct predecessor with regard to power – also equipped with a 180 PS 1.8-litre turbo engine – consumed 7.9 litres per 100 kilometres (equivalent to 188 g/km CO2). This means that the new car is 25 percent more fuel efficient. That’s real progress. The GTI is also the first Polo to be available with bi-xenon headlights including cornering light, LED daytime running light and corner marker light as well as a panoramic tilt/slide sunroof.

TSI drive: More power by engine charging
The tradition of the sporty top Polo model versions reaches back nearly a quarter of a century and is based on the legendary Polo Coupé G40 from 1986. As the first car ever to be equipped with a mechanical G-charger – it re-defined the vehicle dynamic limits in this segment. Its engine had a power of 83 kW / 113 PS and made the Polo G40, which in top condition today is a coveted collector’s item, nearly 200 km/h fast. In contrast, the predecessor of the new Polo GTI first switched over to turbo technology in the year 2006. Its base version had a power of 110 kW / 150 PS; the legendary Cup Edition then took this figure up to 180 PS.

Back to the future: At the end of May, the first new Polo GTIs will appear in Germany, and will then progressively be introduced across Europe and in Japan. The combination of direct injection, supercharger and turbocharger under one engine bonnet will generate plenty of excitement in this segment. The 180 PS Euro-5 16-valve four-cylinder engine reaches its maximum power at 6,200 rpm. Its maximum torque of 250 Newton-metres is also impressive for an engine of this size. It is already there from 2,000 rpm and stays at a constantly high level up to 4,500 rpm. These numbers highlight the fact that very torque-strong and rpm-loving 1.4 TSI has an easy game of it with the Polo GTI. It breathes a rare level of agility into the quick front-wheel drive car in all of life’s situations and at all engine speeds.

DSG transmission: Extremely efficient, extremely sporty
Having a positive effect on this dynamic is the standard 7-speed DSG. The direct shift gearbox unifies the sports appeal and economy of a manual gearbox with the operating convenience of an automatic. As an alternative to the fully-automatic mode, the DSG may also be shifted manually – either by gearshift lever via the Tiptronic shift gate or via the standard shift paddle on the steering wheel.

Sport chassis: 15 millimetres lower and 17-inch tyres
The top performing variant in the Polo model range is a thoroughly sporty and safe car. Among the systems responsible for this is the GTI sport chassis including ESP and the XDS electronic transverse differential lock. It ensures that the Polo GTI’s power is cleanly transferred to the road, even in tight serpentine curves. The running gear is based on the fundamental layout of a McPherson front suspension and semi-independent rear suspension combined with exceptionally dynamic tuning. New, stiffer dampers are linked to specially modified springs that lower the ride height by 15 millimetres compared to “Normal versions”. The effect: lower angles of body roll and a lower centre of gravity. Both have positive effects vehicle dynamics through curves. Serving the same purpose are the low-profile tyres (215/40 R17 87V) on alloy wheels in GTI-typical 5-hole “Denver” styling (7Jx17), whose look the new top Polo shares with the Golf GTI.

A modern extension of familiar EDS functions is the XDS electronic transverse differential lock, like the one Volkswagen presented for the first time on the Golf GTI. XDS improves handling through fast curves and calibrates the car to be more “neutral”, since it prevents slip of the unloaded wheel at the inside of the curve by active brake intervention, improving traction. This system, standard equipment on the Polo GTI, accesses existing sensor data such as steering wheel angle, yaw rate and wheel speeds. The effect: more safety and driving fun, because the Polo GTI steers even more precisely with XDS.

GTI features: Sporty and legendary
The new top model in the Polo range is easy to recognize as a GTI at first glance – inside and outside. It openly displays the visual insignia of this unique badge.

Exterior: Here the sportiest Polo stands out from the crowd with the two classic red trim strips on its radiator grille. From its role model – the larger Golf GTI – it has adopted the honeycomb structure of the air inlets inserts in the uniquely styled front apron. Also GTI-specific are the fender flares and the rear spoiler painted in body colour. Other exterior details of the Polo GTI include the already mentioned 17-inch alloy wheels in “Denver” styling that offer a clear view of the red painted brake callipers, as well as a customised rear apron with a diffuser look in its lower section. Integrated on the left side are the chrome dual tailpipes of the exhaust system.

Two other features are available as options for the first time on the new Polo GTI in this model series: the electrically operated panoramic tilt/slide sunroof extending back to the B-pillars, and the completely new layout of the bi-xenon headlights. As mentioned previously, also integrated in the dual headlights were the LED daytime running lights, corner marker lights and cornering lights.

Interior: Here too the 180-PS Polo impresses with genuine GTI ambiance. This is already achieved by the standard top sport seats with their classic fabric covers in typical diamond pattern, which stylishly recall the first GTIs of the 1970s. The roof liner, roof pillar trim, grab handles and sun visors are all styled in a sporty black; a glossy black surface treatment also decorates the panels of the centre console. They are coordinated with intentionally contrasting colour and material accents such as brushed chrome for the air vent surrounds and chrome accents for the round control knobs. Also completely styled in this brushed chrome look are the inside door handles, frames for the gearshift lever and parking brake, the DSG gearshift gate and the three spokes of the leather sport steering wheel. Styled in classic red are the distinctive decorative seams on the gearshift boot, parking brake grip and steering wheel.

Moreover, the extensive list of standard features emphasise that sportiness and comfort are not incompatible concepts in the new Polo GTI. Along with the features already mentioned, they also include pedal caps in aluminium look, electric window lifts in front (three-door) and rear (five-door), electric adjusting and heated door mirrors, air conditioning, RF remote control of central locking and front fog lights. The leather trimmed steering wheel is equipped with two DSG paddles, one on the left and one on the right. Then there is of course a passive safety package with driver and front passenger airbags, head-thorax side airbags and belt tensioners in front, as well as Isofix points on the rear bench seat for suitably fitted child seats – features that make this Volkswagen not only the best and most fuel efficient Polo GTI since the model series was begun, but also the safest.