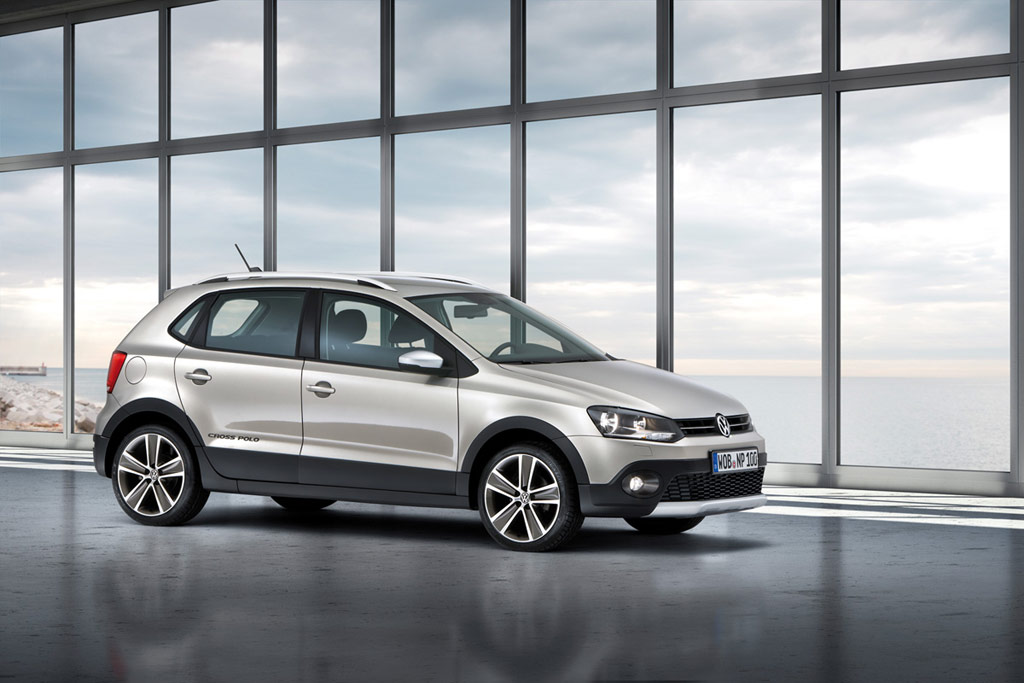 The next generation of the CrossPolo is ready for new adventures. The clever compact in rugged all-terrain look is celebrating its world premiere at the Geneva Motor Show. After the Polo base version presented in 2009 and the Polo BlueMotion (debut in 2010) with its superior and possibly record-breaking fuel efficiency, as well as the Polo GTI now also debuting in Geneva, the CrossPolo completes the series as a fourth model. With its refreshingly cheeky design, unique world of colours and features, and a higher ride height (15 millimetre gain), the five-door is very appealing as one of the most unconventional vehicles in its class.

This all-rounder is powered by extremely fuel-efficient engines with a power range from 51 kW / 70 PS to 77 kW / 105 PS. Buyers can choose from three petrol and three common rail TDI engines. Three of the six engines can be ordered with a 7-speed DSG, like the one used on vehicles such as the Polo GTI.

Exterior: Tough qualities and lifestyle character
The rugged-sporty character of the CrossPolo – always produced as a five-door – are reflected in many of its details. Especially striking: the individually styled front apron – in anthracite colour – with integrated front fog lights and large air inlet at the centre. It gets a black honeycomb insert bordered by fine chrome trim. Towards its lower edge, the bumper finishes with a section in light silver with the visual appearance of underbody protection. Taken from classic Polo styling are the upper radiator grille with its chrome inlay and the VW logo integrated here; the same applies to the dual headlights with standard daytime running lights.

The side profile of the CrossPolo also shows very tough qualities. Here sporty black wheelarch extensions and coordinated body sills set the styling. The latter continue visually into the lower door area. In off-road driving and in the jungle of metropolitan parking spaces, these rugged plastic guards protect the car from damage. Fitting the character of the CrossPolo are the 17-inch alloy wheels (“Budapest” style) in 5-spoke design with size 215/40 tyres.

Another unmistakable characteristic of the CrossPolo: the silver anodized roof rails. They are a traditional feature on this model, and are certainly not just decorative. They can be used to mount roof boxes and carrier systems with a weight of up to 75 kilograms. Colour coordinated with the roof railing, like on the previous model: the door mirrors that are always painted in silver. At the rear, the CrossPolo continues the rugged all-terrain look in the bumper, whose lower section is also designed in a black, rugged plastic. At its centre, a separate section painted in silver catches the eye that is styled to look like a diffuser.

Six exterior colours accentuate the powerful style of the CrossPolo; offered exclusively on the new Volkswagen are the colours “Magma Orange“ and “Terra Beige Metallic”. Across the board, the upper areas of the bumpers and handles (door, tailgate) are painted in body colour, while the cover trim of the B and C pillars and the window frames are treated in a high-gloss black.

Interior: Exciting and versatile
The high-end interior of the CrossPolo is a fitting match for the all-terrain look of the exterior. Here it is primarily the two-tone fabrics of the sport seats, the rear bench and the door trim that create a friendly and youthful ambiance. Up to four different colour trims are available, depending on the exterior colour. While the outer areas of the seats are always in anthracite, customers can choose from the colours “Hot Orange”, “Orange”, “Latte Macchiato” and “Grey” for the inner seat panels and middle sections of the door trim panels. On seat contact surfaces for the back and legs the fabrics (“Dimension” pattern) all have a black webbed structure, making them more durable. The “CrossPolo” signature is embroidered into the backrests of the front seats.

Throughout the cockpit materials are friendly to the touch. Take the steering wheel: It has a fine perforated leather cover; the steering wheel spokes are produced from a brushed chrome application. The seams of the steering wheel cover and the leather-trimmed parking brake handle are given the colour of the interior trim. The CrossPolo’s high level of quality is highlighted by the instrument panel, finished in “Slush” technology with its soft surface texture that is pleasant to the touch.

The CrossPolo has an ample array of standard equipment. In the interior, specific standard features include height-adjustable sport seats, an asymmetrically split rear bench and backrest, pockets on the backs of the front seats and sliding drawers under them, leather-trimmed steering wheel, centre armrest in front (with storage compartment), pedal caps in aluminium look and chrome on various switches and components. The latter include the door handles, surrounds for the window lift switches and air vents. Also standard: electric adjustable and heated door mirrors, electric window lifts all around, illuminated make-up mirrors in the sun visors, multi-function display (MFA) including tyre pressure monitoring (tyre pressure monitoring system, TPMS) and central locking with RF remote control.

Estate car qualities: Cargo space increases up to 952 litres
The new CrossPolo also shows off its versatile talents when it comes to space and efficient space utilisation. As mentioned, the rear bench can be folded with a standard 60:40 split. When it is completely folded, the car’s cargo capacity increases from 280 to 952 litres. The dual cargo floor – adjustable to two height levels – creates a continuously level loading surface. Four tie-down eyes simplify secure fastening of the cargo to be transported, while two hooks in the side trim panels keep bags from tipping over.

Engine variety: Three petrol, three diesel and one 7-speed DSG
The six engines of the CrossPolo have power levels between 51 kW / 70 PS and 77 kW / 105 PS. The entry level among the petrol engines is represented by the 70-PS version with a 1.2 litre displacement. Following at the next level is a 1.4-litre engine with 63 kW / 85 PS. The top petrol engine is the new 1.2 TSI with the mentioned 105 PS. This turbocharged direct-injection petrol engine accelerates the CrossPolo to 100 km/h in 9.9 seconds, reaches a respectable top speed of 188 km/h, yet has a combined fuel consumption of just 5.5 litres of fuel (equivalent to 128 g/km CO2). The highlight here: The Volkswagen not only attains these values in conjunction with the standard 6-speed gearbox, but also with the optional 7-speed DSG, an automatic. Also deliverable as an optional DSG version is the CrossPolo with 85 PS.

Among the quietest engines of their kind are the three common rail, direct-injection turbodiesels (TDI) fitted with a particulate filter. All engines have 1.6 litre displacement and are available at the power levels 55 kW / 75 PS, 66 kW / 90 PS and 77 kW / 105 PS. All three variants need just 4.3 litres of diesel per 100 km in combined mode and emit just 113 grams CO2 per kilometre. The 90-PS version can also be combined with the direct shift gearbox as an option; in this case, combined fuel consumption is 4.6 l/100 km. All CrossPolo engines meet the limits of the Euro-5 emissions standard.

Advance sales for the new Volkswagen are beginning in march. In Germany, the CrossPolo will already arrive at Volkswagen dealers and first customers at the end of May. Right afterwards, the market launch will continue across Europe and in Japan.