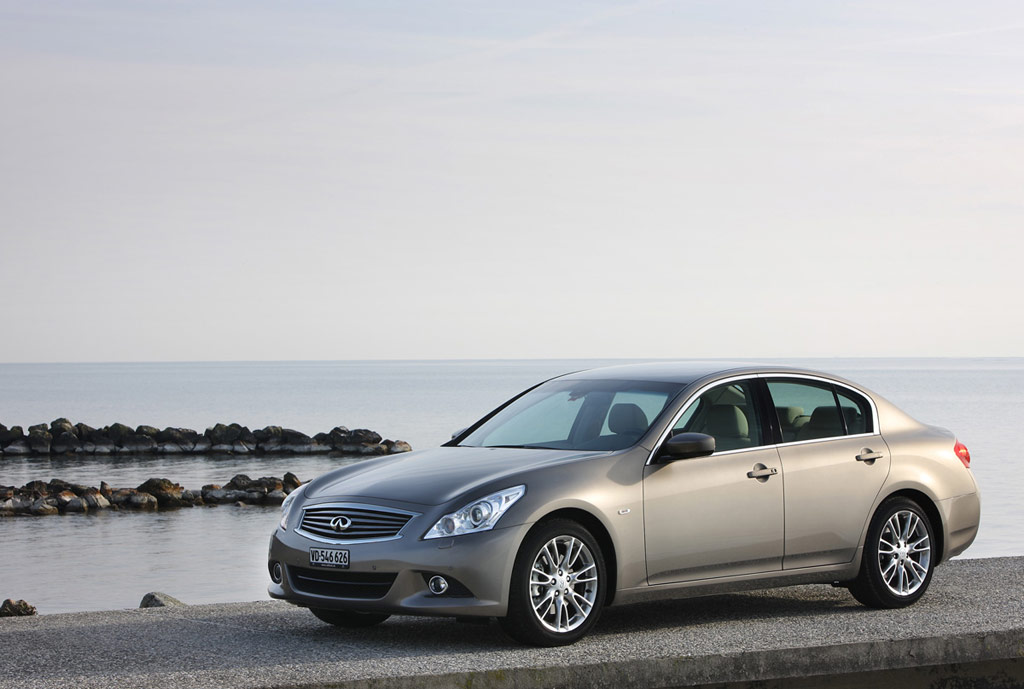 An enhanced interior offering more of what Infiniti does best – distinctiveness, craftsmanship, functionality – is the main change for the luxury brand’s sporting two-door cars, the G Coupé and G Convertible, for Model Year 2010. The move brings the V6-powered performance cars into line with the third G Line member, the saloon, which, it has already been confirmed, benefits from the same package of interior revisions for 2010 as well as exterior enhancements. In addition, Infiniti has introduced a new all-inclusive specification called Premium for the G and G Coupé in response to customer demand.

The new interior look centres on a redesigned console, based on that of the EX and FX crossovers. The revised console builds on Infiniti’s individual interior character, with its emphasis on natural materials and Japanese craftsmanship, while retaining all the ergonomic excellence of before.

The cabin’s aluminium highlights now feature a new pattern, inspired by traditional Japanese calligraphy. In addition, across all models, there’s a new, optional high-gloss Maple wood trim and the dials and instrument display now use white as background colour.

Infiniti’s hard disk drive (HDD) information and entertainment platform, Connectiviti, is fitted to the G and G Coupé for the first time, while the innovative navigation version, Connectiviti+, is standard-fit on new Premium models. Connectiviti+ brings with it far more functionality than the previous navigation system, such as 3D graphics and exclusive access to Michelin’s Green Guide tourist information and gastronomical Red Guide. It’s also four times faster at route calculation than the previous DVD-based set-up.

In the multimedia stakes, the entire G Line for 2010 can now claim to be among the most switched-on luxury ranges in Europe – without buyers having to resort to the often baffling, invariably costly, piecemeal multimedia options offered by some rivals.

A revised exterior colour, in a shade of dark grey, is added to the paint palette for 2010 Coupé and Convertible. It features of course Infiniti’s Scratch-shield technology which magics away fine scratches. In all other ways both two-door models are unchanged on the outside, retaining the dynamic athleticism for which Japan’s newest luxury car manufacturer is rapidly becoming known in Europe.

The revised models form part of an expanded G Line for 2010 with new Premium editions slotting in at the top of the range. Developed in response to customers mainly ordering the G fully-optioned, the Premium versions include all the most popular features as standard, taking “top spec” to a higher new level – no mean feat for a marque already known for its comprehensive specification and short options list.

As well as Connectiviti+ satnav, Premium models come as standard with a Bose® 11-speaker sound system, complete with HDD space for up to 300 CDs, reversing camera and Infiniti’s innovative safety technology, Intelligent Cruise Control (ICC). Every Infiniti is already fitted with cruise control – as well as a speed limiter – but ICC is a smart system that uses laser sensors to maintain a safe distance to the vehicle ahead. The latest Full Speed Range version of ICC will automatically bring the car to a complete stop if necessary.

The new Premium editions of the Infiniti G and Infiniti G Coupé are available in either luxury GT form – leather, heated seats with memory and electric lumbar adjustment for the driver – or more sporting S trim where driver-focused features such as four-wheel active steering (4WAS), limited slip differential (Viscous LSD), sports suspension, sports seats and uprated brakes already come as standard. Infiniti predicts the Premium models will become the top-selling Gs throughout Europe, with half of all saloon buyers expected to go for the GT Premium and four out of 10 coupé buyers opting for the S Premium. In the Convertible line-up, the GT is already outsold by the GT Premium.

Choice for buyers is made even simpler for 2010 by a streamlined entry-level range for both Infiniti G and Infiniti G Coupé. But while there are now fewer options, the entry models continue to be as well equipped as ever with bi-Xenon cornering headlights, parking sensors, powered front seats, electrically adjustable steering column, 18-inch alloy wheels, i-Key smart access, cruise control/speed limiter and Scratch-shield paint all part of the deal – along now with all the multimedia advantages of the Connectiviti system. Even in standard form, Connectiviti comes with features such as seven-speaker stereo, iPod/USB compatibility with AUX-in RCA, Bluetooth audio streaming, 1CD reader with MP3 WMA compatibility and 2Gb Infiniti Music Box.

In other changes for 2010, the success of the all-wheel drive option for the Infiniti G saloon means it now ranks as a model in its own right. Across Europe, 44% of saloons have been the x model with its winter-defying intelligent torque control drive to all four wheels. Automatic Gs – featuring a seven-speed Adaptive Shift Control transmission with steering wheel paddles – are now also listed as separate models.