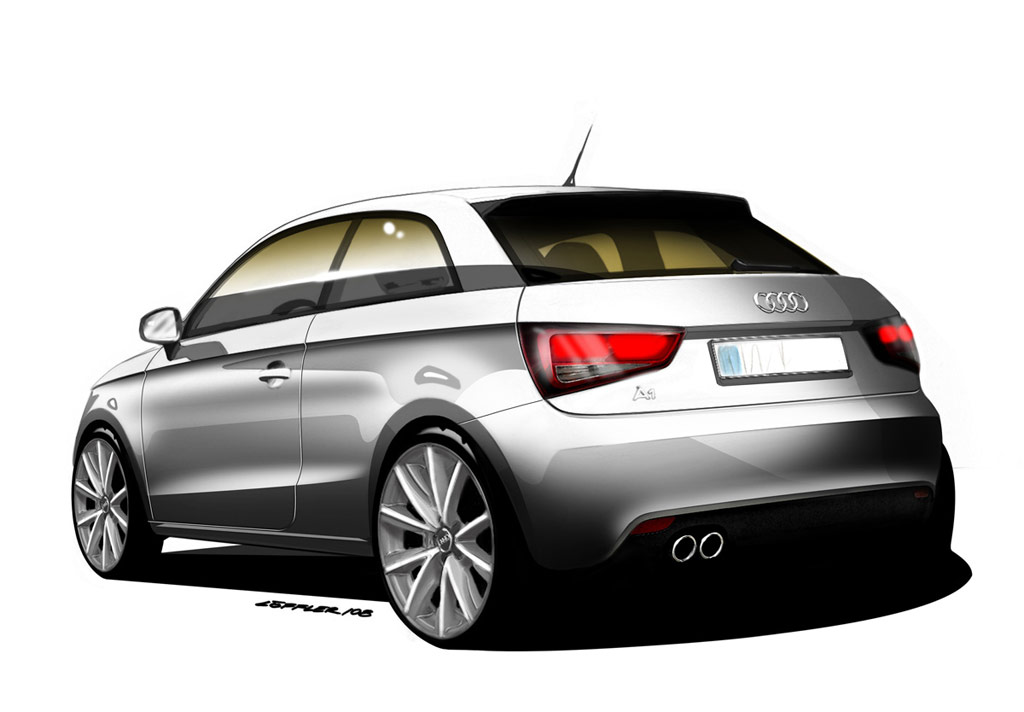 Audi has shrink-wrapped everything it stands for to create the new A1, a more compact and city-friendly three-door premium hatchback that delivers all the celebrated quality, design flair and engineering acumen synonymous with Vorsprung durch Technik in a more concentrated form. The A1 is set to make its World debut at the Geneva Motor Show in March, and will be available to order in Europe from spring for late 2010 deliveries.

Closely following the look of 2007’s critically acclaimed Audi A1 project quattro design study, the production-ready A1 distils the essence of Audi into a sleek, streamlined body with an impressively low drag coefficient of 0.32 which occupies a road ‘footprint’ of less than four metres, without sacrificing space for four adults and their luggage.

Inside, as out, the look and feel of the materials epitomises Vorsprung durch Technik, as does the on-board technology. This includes the latest, ultra-efficient TDI and TFSI engines backed up by start-stop and recuperation systems, state-of-the-art ESP with a new electronic differential lock and archetypal convenience features such as the optional Multi Media Interface (MMI) infotainment system.

Not surprisingly the most space efficient Audi in the range employs the most compact and fuel efficient Audi engines, all of which compensate very effectively for their relatively small displacements with the latest turbo charger technology. In the UK the A1 will initially be available with three impressively frugal units, all optimised by engine start-stop and energy recuperation systems.

The new 1.2 TFSI petrol engine linked exclusively to a five-speed manual transmission kicks off the range, its 86PS and 160Nm peak power and torque outputs enabling a 0-62mph time of 12.1 seconds and a 111mph top speed, delivered with 55.4mpg capability and low CO2 of 119g/km*.

S tronic twin-clutch transmission also for A1
The more familiar 1.4 TFSI power unit is next up, and delivers its 122PS and 200Nm via the standard six-speed manual gearbox or the optional seven-speed S tronic twin-clutch transmission. Equipped with S tronic it takes the A1 to 62mph in 9.1 seconds, and on to 124mph where conditions allow, and in this form can match its smaller counterpart on economy and emissions, delivering up to 55.4mpg with CO2 output of 119g/km.

Already renowned for creating the premium sector’s most fuel-efficient car – the A3 1.6-litre TDI – the 105PS 1.6-litre diesel is the third engine option, and via a five-speed manual gearbox uses its impressive 250Nm torque output to power the A1 to 62mph in 10.8 seconds and on to a 116mph top speed, while retaining the potential to achieve 72.4mpg economy with emissions of 102g/km.

Thanks in part to these relatively light, compact engines, between 61 per cent and 63 per cent of the overall weight of the A1 rests over the front, driven axle – an impressively balanced load distribution for a car in the compact class. Combined with the short front and rear body overhangs, the sophisticated front MacPherson strut and rear torsion beam suspension and the latest generation Electronic Stability Programme (ESP) with electronic axle differential, this facilitates a compliant ride and controlled, well balanced handling that is also nimble and fun.

Depending on which specification level is chosen from the SE, Sport and S line options available in the UK, the suspension controls either 15-inch, 16-inch or 17-inch alloy wheels and has either a standard setting for the SE, a stiffer Sport configuration with lowered ride height or an even more sporting S line set-up. Powerful all-disc brakes, ventilated at the front, and power-saving electrohydraulic power steering feature as standard across the board.

Latest generation ESP with electronic differential
All engine options are supported by the latest generation ESP system with electronic differential, which initiates brief, controlled braking of the inside front wheel and transfers the excess torque to the outside wheel, which can apply more power to the road. This helps to further boost handling agility and neutrality by minimising understeer and improving traction.

These measures have ensured that the A1 will feel every inch an Audi from behind the wheel, an impression which begins to form even before the ignition key is turned thanks to the exceptional quality of the interior finish and the familiar Audi comforts on-board.

The vast majority of the familiar Audi appointments will either be fitted as standard or optional. Standard features will include alloy wheels, air conditioning, electric front windows and mirrors, remote central locking, a single CD audio system and split folding rear seats.

Xenon headlamps with trademark LED daytime running lights will be available at extra cost exclusively for S line models, but all versions will offer the option to upgrade with features such as a BOSE sound system including LED-lit woofers, DAB radio, the Audi Music Interface for iPod connection, cruise and parking distance controls and the Multi Media Interface (MMI) navigation plus system. Based on the system used by the latest Audi A8, MMI navigation plus incorporates a 60 gigabyte hard drive, 20 gigabytes of which can be devoted to music files, linked to a 6.5-inch retractable colour display which can be used to scroll through music tracks or to display 3D mapping for the navigation system.

The A1 will also offer a choice of equipment packages, as well as numerous customisation options for both exterior and interior using an array of colours, materials and equipment options designed to make each car feel as unique and personal as possible. The ‘roof contrast line’ – a contrasting colour scheme for the A, B and C pillars as seen first in the A1 project quattro study in Tokyo and exhibited by the car featured here – is just one of the many options available.