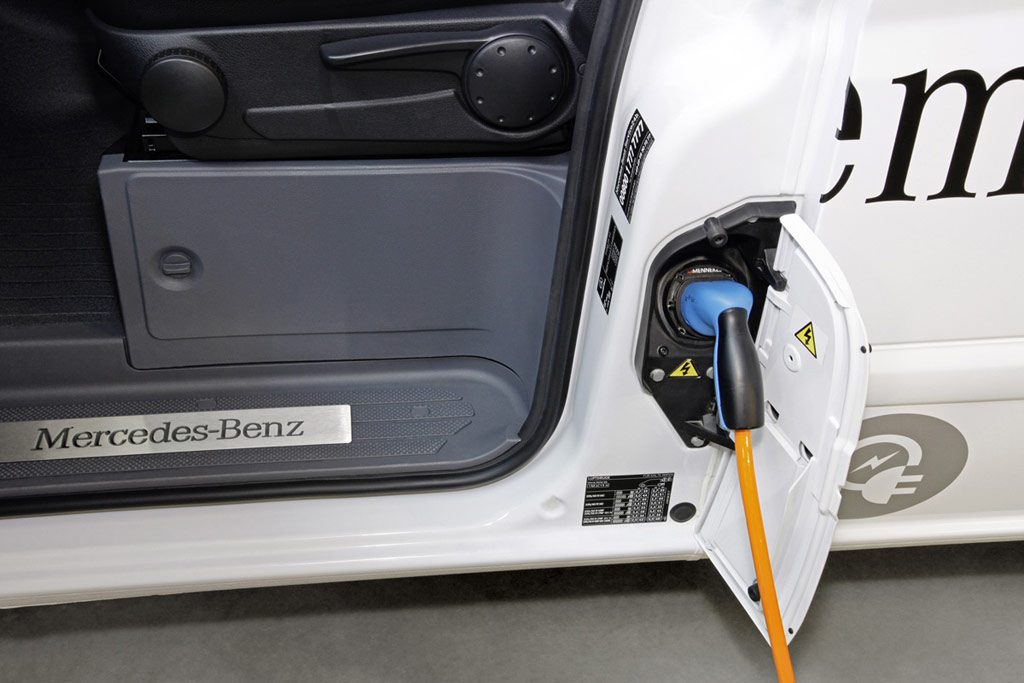 Mercedes-Benz is unveiling the prototype of a battery-powered van based on the Mercedes-Benz Vito at the informal EU Competitiveness Council meeting in San Sebastián from 7 to 9 February. During this event, European ministers of economic affairs meet to discuss issues relating to the economic viability of future technologies. Dr. Dieter Zetsche, Chairman of the Board of Management of Daimler AG, will be giving a speech on the sustainability of electric vehicles in his capacity as current president of the ACEA (European Automobile Manufacturers Association).

Based on the Mercedes-Benz Vito, the experimental vehicle being presented marks the start of a new era in local, zero emission mobility in the van sector. The Vito is the first van in the world to incorporate this technology ex factory, thereby underlining Daimler AG’s commitment to sustainable mobility. The vehicle is the outcome of research and development activities at Daimler AG which are focused on three aspects: optimising combustion engines, boosting efficiency via custom hybrid components and emission-free vehicle operation deploying batteries and fuel cells.

During 2010, more than 100 Mercedes-Benz Vito vans will be delivered to 20 customers, primarily fleet operators and public institutions wishing to transport items in environmentally sensitive zones with zero emissions, including no CO2 emissions, and low noise. Deployment scenarios therefore typically involve short distances and making many stops in urban areas. Production of a further 2000 vehicles is planned in the next phase.

The drive configuration is designed solely to run on battery power and thus dispenses with the powertrain intended for combustion engines.

A battery featuring powerful lithium-ion technology supplies energy to the Vito. With an operating voltage of 400 V, 16 A current and an available capacity of 32 kWh, the Vito’s range averages 130 km but can be considerably higher given an appropriate driving style. The electric motor delivers a peak output of 90 kW. Performance is oriented around customer requirements: an electronically limited top speed of 80 km/h is designed to meet our customers’ transportation needs in and around urban areas.

When it comes to safety features, every aspect is covered. All Vito vehicles come with ESP as standard which incorporates ABS and ASR. The number and type of airbags also corresponds with the current Vito specification. Vehicles are subjected to the usual crash tests with regard to passive safety. There is no loss in terms of payload or load volume compared to a conventionally powered Vito as a load capacity in excess of 900 kg is possible.

Assembly of the electric-powered Vito is being integrated directly into standard production. The Mercedes-Benz plant at Vitoria in the Basque region of Spain is already preparing for the challenges associated with manufacturing an additional variant. Logistics, staff training and production technology are receiving financial support from the regional government.

In Germany too the Federal Ministry for the Environment, Nature Conservation and Nuclear Safety (BMU) is providing subsidies to support the efforts of Mercedes-Benz Vans in the areas of research and development, testing and customer deployment.