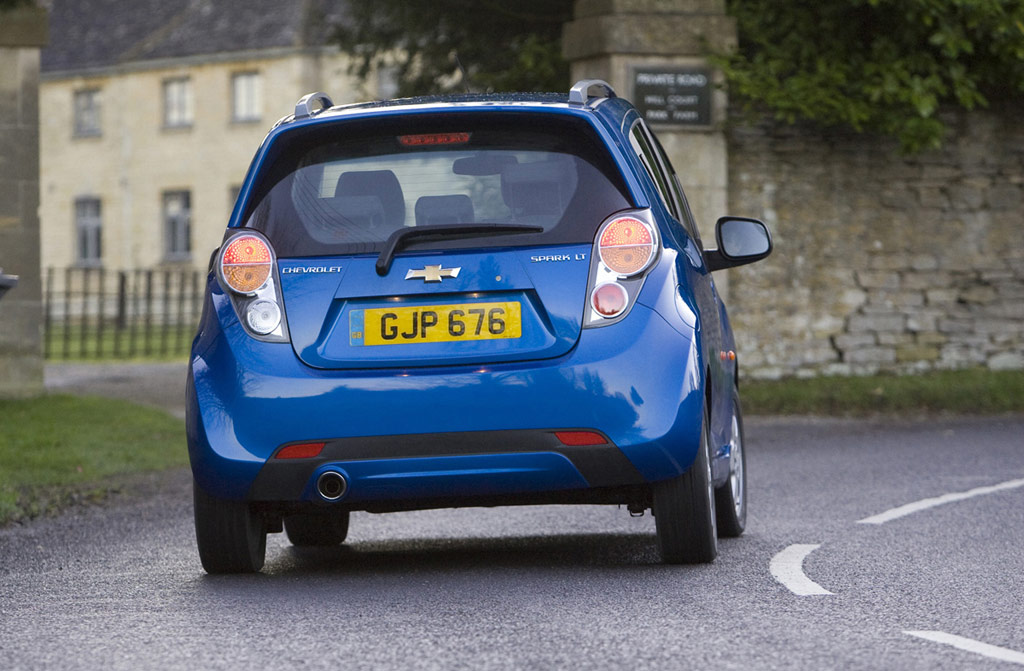 Every so often, a car comes along that challenges conventional thinking. A car that offers much more than you’d expect for the money, redefines style, takes normal practice and turns it on its head.

The new Chevrolet Spark is one such vehicle. Built to serve the burgeoning mini car segment, the fastest growing area of the new car market across the entire world, it is a newcomer that has been designed to appeal to car buyers in every inhabited continent across the globe, from India to Africa, Australia to the USA.

But it’s in Europe where Spark will find its true identity. On sale in all major European markets, including the UK, from the first quarter of 2010, it exceeds all expectations of what a buyer might expect from a small car – be it as an urban motorist, or one who simply doesn’t need a larger car.

From the outset, Spark was engineered and designed to meet exacting standards. The bodyshell is exceptionally stiff, with no external panel gaps greater than 3mm, and the fit and finish of the interior is designed to match, if not beat that of cars in a class or two above.

Yet despite the quality, Spark is also designed to be edgy, vibrant and fresh, as well as to offer exceptional levels of space and practicality. There aren’t many cars with such a small footprint that can offer the benefits of five doors, five seats and a usable luggage area, for example.

“We’ve styled and engineered the Chevrolet Spark so that it can compete anywhere in the world where there’s a demand for mini cars and the benefits they bring,” said Jack Keaton, vehicle line executive for the new model. “The Spark is, first and foremost, a car that offers great economy and manoeuvrability, yet it is also quite sophisticated. We think it will turn heads with an aggressively stylish design and we think it’s going to make a lot of drivers happy with its dynamic ride and handling abilities.”

Keaton said that while the Spark is certainly affordable, it was not developed to be either the most or least expensive offering in its category.

“We developed the Spark with the idea that buyers would feel they got a lot of vehicle for their currency,” he said. “From a complete package perspective, we think the Spark will be among, if not the best five-door car in its segment. It offers high quality craftsmanship, is well-equipped with safety technologies and, most importantly, is fun to drive.”

Much of the Spark’s character comes from its styling.

“From the beginning, we wanted to have a revolution in size and design,” explained Taewan Kim, vice president of GM DAT Design. “We wanted to take a big step forward to deliver a completely new statement, especially in the design of the car. We wanted it to look ready to pounce, it needed to look great from 360 degrees and it needed to generate excitement.”

The exterior of the Spark features a ‘wheels-out; body in’ stance, its single arc roofline accentuated by strong, clean body sides free of cladding. The appearance is sleek; slightly aggressive, and unmistakably more upmarket than a number of mini car rivals, which tend to favour a more ‘cute’ approach.

This precision and attention to styling detail is not only reserved for the car’s exterior – unlike some models in the segment, where interior design is clearly functional, the Spark manages to add a youthful, vigorous appeal to the inside of the car that is equal to the look of the exterior.

While maintaining exemplary levels of craftsmanship, the Spark’s cabin is an iconic piece of design in itself. It maintains all of the class attributes – comfort, spaciousness and easy-to-use controls, yet delivers them in a style that is unique to the sector.

The focal point of the cabin is the motorcycle-style instrument ‘pod’, which sits on top of the steering column and delivers all of the essential information in a compact yet easy-to-read manner. The analogue speedometer is backed up by a digital tachometer, just like on a sports bike, backlit by upmarket ice blue lighting when the headlights are turned on. It’s truly unique to the sector, and clearly illustrates the Spark’s intention to put the fun back into function.

As well as its edgy styling, Spark also has advanced dynamics. It has taut, responsive handling characteristics, at the heart of which is a very stiff integral body frame structure, designed to aid the car’s dynamic performance and provide the driver with a heightened sense of stability, solidity and confident road command.

The suspension follows a traditional yet effective layout – MacPherson struts at the front and a compound crank (torsion beam) axle at the rear, a combination that allows for neutral, predictable handling characteristics. It is both nippy and nimble round town, yet surefooted at higher speeds.

Depending on market and trim level, Spark is also available with a system known as VSES, standing for Vehicle Stability Enhancement System. This provides outstanding safety and control benefits, with electronic brake and traction control capabilities to provide precise anti-lock braking capabilities, as well as exceptional yaw stability.

Of course, even the most able driver in the most dynamically competent car can sometimes find his or herself in a situation where a collision is inevitable, so with this in mind the Spark was designed with high levels of passive safety inbuilt from the outset, enough to earn it a creditable four-star Euro NCAP crash test rating.

Almost 60 per cent of the car’s structure consists of advanced steels, with varying levels of stiffness and built-in crush zones to absorb crash impacts. The front engine bay rails and subframe are designed to absorb energy while maintain the highest loads possible as they collapse, while a transition zone around the base of the A-pillars and front bulkhead effectively distributes crash energy around rather than into the passenger compartment.

A similar crush zone exists at the rear, with the fuel tank and its connections designed in a way to minimise the chance of ruptures. Additional rear impact loads are absorbed by a strong rear cross member, as GM’s internal rear crash measurement standards are greater than industry required standards.

High levels of occupant protection are further enhanced by twin front airbags, side curtain airbags and additional seat mounted thorax and abdomen airbags, seatbelt pretensioners and a pedal retraction system, which pulls the pedal box away from the car’s occupants in the event of a frontal collision, reducing the risk of lower leg injury.

Two engines are on offer at launch – both petrol units with displacements of 1.0 and 1.2-litres.

Both units are closely related and use a cast iron block and alloy head, with a double overhead camshaft and four valves per cylinder. They feature multi-port fuel injection and are both Euro V emissions compliant.

The two engines use advanced features such as port de-activation technology to improve exhaust gas recirculation, leading to optimal fuel efficiency and idle stability, along with a timing chain to ensure a lifetime of low maintenance and running costs.

Practicality is a big plus, too. It may not be very big on the outside, but the Chevrolet Spark’s clever design means it is able to make the most out of its available space.

Front seat passengers enjoy up to 1067mm of available legroom (893mm in the rear), while shoulder space of 1295mm (1255mm rear) and headroom of 1010mm (947mm) are also rated among the very best in the segment, proving that even when a car is small, it doesn’t need to be cramped.

With five doors and five available seats, the Spark is one of the most space-efficient cars in the mini segment.

Much of the interior space is down to the car’s clever design – details such as the steering column-mounted instrument pod and longer than average wheelbase allowed the designers to reduce cabin intrusion, allowing for as much space between the axles as possible.

On top of this, the cabin was planned to accommodate as much supplementary storage space as possible. The centre console, for example, incorporates a bin for carrying smaller items such as a mobile phone, MP3 player or packet of chewing gum, while there’s also a double cup/drinks holder ahead of the gear shifter.

All of this in such a compact package: at only 3640mm long and 1597mm wide, it will easily squeeze into tight city spaces, yet thanks to its short overhangs and clever cabin design the compact dimensions come without compromise.

While we can’t promise that the Spark will put an end to the stresses of commuting, we do believe it will make urban life much easier to tolerate – as the Spark’s packaging, driveability, classless looks and easy-to-manoeuvre nature make it a multi-faceted car that will fit in with even the most frantic of lifestyles.

Spark is a car with immense character, a fresh youthful design, a classless image, great practicality and low cost of ownership; in short, everything an urban motorist needs, and a lot more besides.