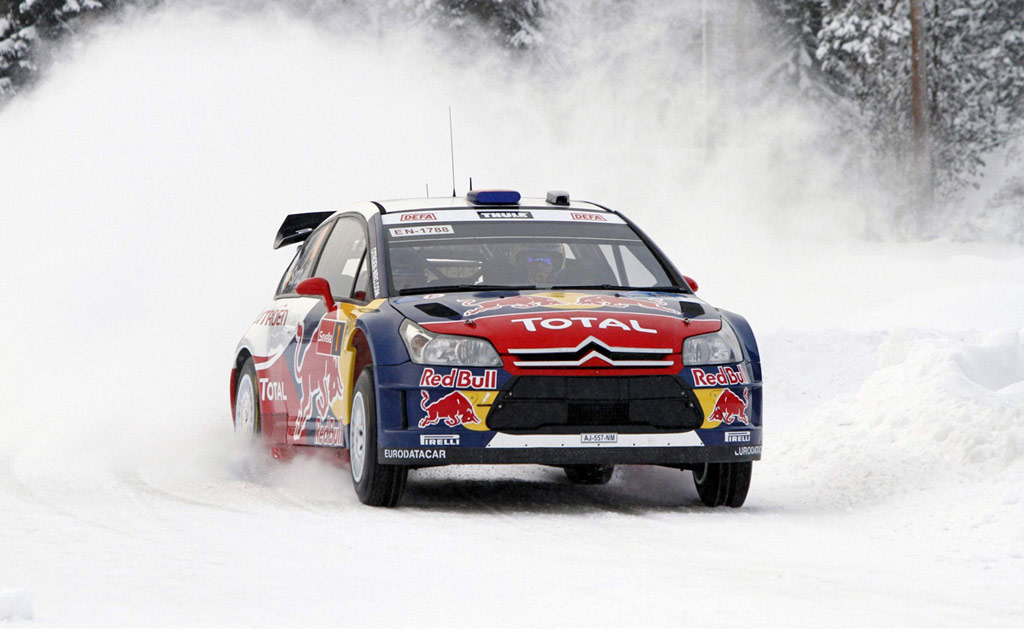 The Citroën Total World Rally Team will start Rally Sweden (11th-14th February), the first round of the 2010 FIA World Rally Championship, with their motivation at an all-time high. Sébastien Loeb and Daniel Elena will be gunning for a seventh consecutive title, while Dani Sordo and Marc Marti will be the key men in Citroën’s conquest of a sixth crown in the Manufacturers’ World Championship.

The Rally of Sweden, run around Karlstad in the Hagfors region, marks the return of the FIA World Rally Championship that kicks off after a three month break.

Despite the fact that Sébastien Loeb is six-times world champion, scored his first victory on a surface other than asphalt in Sweden back in 2004 and won in Norway last year, he doesn’t feel that he is the favourite for the opening round. “I like starting the season with this rally, but it looks like the conditions are going to be very difficult. You just have to stay on the road, which isn’t all that easy when I think back to the 2008 rally. My only aim is to rack up another world title, but the way last season panned out shows that you can’t count your chickens before they’re hatched!”

Dani Sordo’s season began a few weeks ago with success in the Arctic Lapland Rally, the opening round of the Finnish Championship. Sordo comments, “It was a great way of boosting my confidence on this surface. Even though I didn’t really have any rivals there’s nothing like competition to get you back into the right rhythm and feel the reflexes coming back. Unlike a test session where we use the same route so we know it by heart, each special was a new challenge for me and I had to analyse the behaviour of the C4 WRC. The route was very similar to that of Rally Sweden so I feel absolutely ready.”

Dani’s main aim hasn’t changed in relation to the previous seasons, which is a crucial factor in the conquest of the Manufacturers’ title. “You have to be quick, consistent and score the maximum number of points in each rally. That’ll still be the case in 2010, but I want to push even harder. I’m really determined to win my first WRC rally this year. I know I can do it, and whether it comes in one of the asphalt rounds or the gravel events that I like very much such as Mexico, New Zealand or Portugal, it doesn’t make any difference.”

Olivier Quesnel, the Citroën Racing Team Principal comments, “You don’t change a winning team so we’re tackling 2010 with the same crew as the previous seasons. The final year of the World Rally Cars looks like being a great one for the World Championship – and for Citroën – which has a real dream team. The drivers of the five C4 WRCs entered this season have all been word champions in motor racing: namely, Sébastien Loeb, Dani Sordo, Sébastien Ogier, Kimi Raïkkönen, and Petter Solberg with his own team. It is difficult to do much better!”

1. Unlike most of your rivals in the world championship, you’re starting your season in Sweden. Is the lack of competition a handicap?
“Holidays are pretty good too! Between testing, prize-giving and promotions I’ve not had enough time to get bored since we last saw each other in Cardiff! I’m happy that I was able to take a breather, but the two days practice I did in Sweden got me back into the swing of things. Now I can’t wait to be at the start of the first special.”

2. What about the rally? As the winner of the last winter rally do you think you’re the favourite?
“The conditions will be very different to those of the 2008 event. Snow’s fallen on frozen gravel, the temperature hasn’t risen above zero and the snow hasn’t been transformed into a layer of ice. We’re faced with a layer of powdery snow covering frozen earth so the grip level is going to keep on changing. It’s a bit like Russian roulette, and I’d really prefer a good layer of ice with constant grip. I don’t think I’m the favourite, as the Finns will feel much more at home than me. But you just have to keep it between the hedges!”

3. You’re aiming for a seventh consecutive world title. Did the way the second half of the 2009 season panned out change your approach?
“Since I lost the title by one point (in 2003) I’ve always applied the same logic. Every point is vital when you want to win a championship as difficult as the WRC. The way things went last year only confirmed this viewpoint. This being said, when Lady Luck deserts you, there’s nothing you can do! With this season about to begin I’m still in the same frame of mind as last year. I’ll start every rally with the intention of winning.”