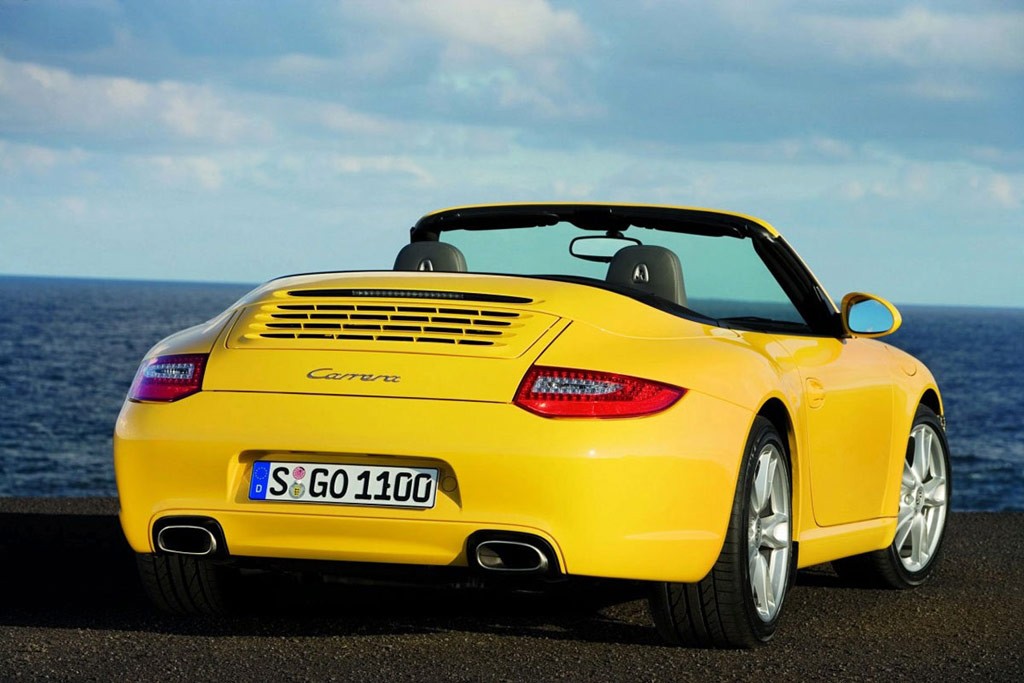 The Porsche 911 stirs emotions in sports car enthusiasts the world over. Timeless emotions that have been experienced by generations since the model series was first launched in 1963. This summer, Porsche is introducing the next generation of the 911: a car that exemplifies the core 911 principles of distinctive design with inner strength.

Acclaimed as one of the best sports cars in the world, Porsche has developed the unique rear-engined concept of the 911 continually over its 45 year evolution so that it remains relevant in changing times. The 911 is the perfect synthesis of sportiness, superior everyday versatility, all-round economy and genuine environmental compatibility. Now, by introducing a wide range of new and truly comprehensive technologies, Porsche has built on the outstanding reputation of the 911 to further optimise the car for today’s driving environment. All-new flat-six power units displacing 3.6 and 3.8-litres featuring Direct Fuel Injection (DFI), and the option of the Porsche Doppelkupplungsgetriebe (PDK) double-clutch transmission, are particular highlights marking a quantum leap in the car’s development.

The four new 911 models – two Coupés and two Cabriolets – offer increased dynamic performance and outstanding efficiency. With either a six-speed manual gearbox or the PDK transmission, the Carrera Coupé offers outstanding fuel economy of 29.4mpg combined. Furthermore, CO2 emissions of the 3.6-litre engine are down by up to 15 per cent to 225 g/km, thereby achieving VED Band F and reducing vehicle excise duty and company car taxation costs. And these engines, six kilogrammes lighter than before, also outperform EU5 emissions regulations.

The driver benefits from a further advantage of direct injection every time he moves the throttle pedal: with fuel being injected fractions of a second prior to combustion, the engines respond even more directly and spontaneously to even the slightest movement of the driver’s right foot. This is not only the case when accelerating, but also when lifting off the throttle, for engine speed drops more quickly and smoothly since there is no residual fuel left in the intake manifold which might otherwise prolong the combustion process.

Direct fuel injection also serves to ensure ‘homogeneous’ operation of the power unit with a consistent balance of the fuel/air mixture in the combustion chamber at all times and under all running conditions. Such homogeneous operation guarantees optimum combustion, maintaining consistently low emissions, without making any particular requirements in terms of fuel quality. Depending on engine load and speed, fuel is injected into the combustion chamber at a pressure of 120 bar. The big advantage is that unlike conventional intake manifold injection, direct fuel injection serves to form the fuel/air mixture directly in the combustion chamber. This better mixes the air and fuel in the cylinder, establishing an important prerequisite for clean and complete combustion.

With the evaporation of fuel reducing the temperature in the combustion chamber, the amount of air drawn in may be increased accordingly, helping to improve the cylinder charge and the level of engine power. At the same time, the cooler fuel/air mixture allows a higher compression ratio in the interests of greater efficiency and extra power from less fuel. Thus, the combustion chambers in both the 3.6-litre and 3.8-litre engines now have a compression ratio of 12.5:1, as opposed to 11.3:1 on the 3.6-litre and 11.8:1 on the 3.8-litre to date.

Porsche Doppelkupplungsgetriebe (PDK)
The new generation 911 is available for the first time with the new Porsche Doppelkupplungsgetriebe (PDK), literally Porsche double-clutch gearbox. Offering no less than seven forward gears, the new gearbox combines the driving comfort of a torque converter-equipped automatic transmission with the dynamic manual gearshift functionality of a sequential racing gearbox. PDK also boasts an entirely automatic gearshift function, and replaces the Porsche Tiptronic S automatic transmission previously offered on the Carrera and Carrera S. Through its optimised and adaptive gearshift programmes, PDK improves the acceleration of the 911 and reduces fuel consumption to a level even lower than before.

The gearshift perceived by the driver comes not from the gears actually changing, but from the change of positive clutch engagement. In this case, the clutch on one transmission opens or disengages while the clutch on the other transmission closes or engages in a simultaneous process. The big advantage is an even faster gearshift than with a conventional manual gearbox or torque converter automatic transmission. The gears are already ‘in mesh’ when shifting and the power of the engine need not be interrupted in the process.

PDK also reduces to a minimum transmission power losses courtesy of the high standard of mechanical efficiency in the double-clutch, and this manifests itself in fuel economy improvements of approximately 13 per cent compared with a conventional Tiptronic S transmission. PDK also offers an advantage in terms of weight – despite two additional gears, it weighs 10kg less than Tiptronic S.

This PDK gearshift principle was first developed by Porsche for motor sport 25 years ago. Porsche works drivers benefiting from this technology were able to accelerate faster than their competitors and keep both hands on the steering wheel while changing gears, thus avoiding even the slightest distraction while shifting.

The seven-speed PDK shifts gears up to 60 per cent faster than a conventional automatic transmission, and naturally, gives the new 911 Carrera models even better performance: when equipped with PDK, the Carrera S Coupé accelerates in 4.5 seconds from 0-62mph (0-100 km/h), another 0.2 seconds faster than with a manual six-speed gearbox – and 0.8 seconds quicker than its predecessor with Tiptronic S.

And those customers in search of optimum driving dynamics have the option to combine PDK with Sport Chrono Package Plus, now featuring Launch Control. The result is high speed acceleration from rest free of wheel slip, combined with race-style gear shifting, enabling the car to accelerate to 62mph (100 km/h) in a truly outstanding 4.3 seconds.

To use the various functions of the double-clutch transmission, the driver can either shift gears by means of toggles on the spokes of the new steering wheel, or via the new gear selector lever. The driver can press forwards to shift the gears up, and press them from behind to shift downwards. Alternatively, pushing the gear selector lever forwards shifts up a gear, and pulling it back shifts down. The option of PDK costs £2,338, and the Sport Chrono Package Plus upgrade costs £729.

Evolutionary Styling Development
At first sight, the new generation of the 911 can be identified through innovations in design both front and rear. These include larger rear view mirrors, newly-designed 18-inch and 19-inch wheels and new lights featuring LED technology. With LED day-time driving lights and bi-xenon headlights now standard on all new models in the Carrera range, the distinctive style of the 911 silhouette has continued to evolve, and its classic look is further emphasised by striking, new LED rear lights. As a further driving safety option, Porsche now also offers Dynamic Cornering Lights on all models.

Developments in Multi-Media
The sophisticated interior of the 911 has evolved similarly. Most obviously, the Porsche Communication Management (PCM) control system features a simplified control panel – plus a larger 6.5-inch display with ‘touchscreen’ technology for the first time – which makes inputs to the audio system or the optional satellite navigation more straightforward. PCM can now be fully compatible with external audio sources, such as an iPod or a USB stick, and Bluetooth. A TV tuner is a further option, which can receive both analogue and digital television signals.

Fitted to every 911 is a Porsche Vehicle Tracking System (VTS), a sophisticated vehicle security package approved to Thatcham Category 5 standard, and customers will also be able to explore the potential of their new car on a Porsche Driving Experience course.