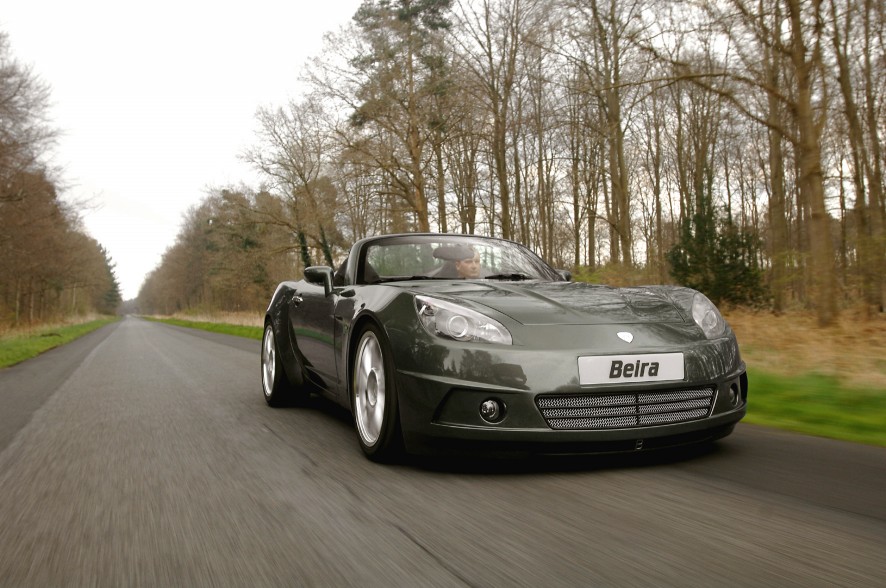 London’s Canary Wharf is the stage for the show debut of a stunning new British sportscar on June 9, as Breckland Technology removes the wraps from its exclusive two-seat V8 soft top, the Beira, at London Motorexpo.

Norfolk-based Breckland – part of Hong Kong-based multi-national, Riche Holdings – is vastly experienced in the development and production of high-quality, low volume specialist cars and prototypes for an array of prestigious international clients, including Mosler, and has now employed its substantial skills in the making of its own limited-production supercar.

The Beira is a hand-built, two-seat roadster with unique styling cues, based on proven GM architecture and powered by GM’s LS2, 6-litre V8 engine, tuned to produce just a whisper short of 400bhp.

Tipping the scales at some 1,400kg, the Beira’s impressive power-to-weight ratio ensures invigorating performance, with the promise of a sub-five second sprint to 100kph, coupled with tremendous torque and a governed top speed of 155mph.

“Beira carries on from where Marcos and TVR left off in terms of providing maximum performance for money spent, and real individuality”, says Breckland Director, Mike Rawlings.

“We wanted to showcase Breckland’s design and engineering capabilities and produce an exciting driver’s car, with excellent handling dynamics, terrific performance and great looks,” he added.

“We also looked seriously at environmental concerns and, as a result, Beira is designed to run on Liquefied Petroleum Gas as well as petrol. This not only helps to reduce running costs and emissions, but also means Beira is capable of a range of some 700 miles between refuelling stops – that’s the equivalent of travelling non-stop from the north to the south coast of France.

Beira dynamics
Beira is based on the well-developed General Motors Kappa platform, on sale in the North American market.

Beira differs in many significant respects from the GM products however, the most radical departure being the installation of the potent, 6.0-litre, LS2 V8 engine, more commonly found in Corvette and Pontiac GTO models. It replaces the four-cylinder Ecotec engine and, by comparison, produces more than twice the power of the original unit.

“We didn’t set out to reinvent the wheel with Beira,” says Engineering Director, Mark Easton. “The Kappa platform offers a highly competent chassis, which has been subject to intensive crash and safety tests, and is readily available.

“Since all of the hard work has been done, it has enabled us to keep development costs low. Over the years, and through our own experience, we’ve seen many supercars come and go, due in part to their massive development costs, and we were adamant that we would not fall into the same trap. That’s why we developed the Beira where we needed to, not for the sake of it. It has also enabled us to bring the project to fruition in less than 12 months.”

The mighty, fuel-injected, aluminium V8 and Tremec six-speed manual gearbox are neatly packaged under the Beira’s swooping bonnet, with a bespoke wiring harness and ECU, the latter being reprogrammed to allow the V8 to deliver close to 400bhp, combined with a dual-fuel capability.

Other key considerations involved significant attention to chassis dynamics, to ensure the car corners, steers and brakes effectively with the significant increase in engine output.

To satisfy this requirement, the fully independent suspension was entirely re-engineered by Breckland in association with KW Suspension, with uprated springs, dampers and bushes, plus thicker anti-roll bars front and rear. The result is slightly less suspension compliance, but a more focused ride and handling.

Stopping power is provided by impressive, 325mm ventilated discs on all four corners, the fronts being grasped by six-pot callipers, with four-pot at the rear, both from UK specialists, HiSpec.

Steering is via power-assisted rack and pinion, whilst the dramatically styled 18” cast alloy wheels are 8.5” front and 9.5” rears, shod with Bridgestone ultra-low profile tyres. Customer options include an upgrade to 19” diameter rims and tyres.

Exterior packaging
In order to make the Beira eye-catchingly different, save weight and liberate additional luggage space behind the passenger compartment, Breckland’s design engineers have totally re-modelled both the front and rear body sections in-house, using lightweight composites instead of steel, the result being a highly distinctive nose section and pronounced fastback rear.

Despite the inclusion of an additional 70-litre LPG reservoir to go with the existing, 13-gallon petrol tank, the Beira features a significant increase in usable luggage space with the hood down, thanks to some clever packaging solutions.

GM steel doors are used to ensure excellent side-impact protection and good sealing properties, while crash protection front and rear is provided by transverse aluminium crush structures attached to the hydro-formed steel chassis. Both front and rear bulkheads are steel to provide rigidity to the windscreen and hood.

Breckland stresses that the Beira’s interior can be customised to specific buyer requirements in terms of materials and equipment – one significant benefit of the company’s inherent flexibility as a low-volume producer.

A GM manual cloth hood with heated rear screen is retained on the Beira and, when folded down, stows quickly and neatly out of sight under the deck lid for a smooth,
integrated appearance. This is further accentuated by the sculpted deck lid, incorporating individual fairings behind driver and passenger.

Affordability
The Breckland Beira is designed very much as a high-quality low-volume, affordable sportscar for enthusiasts, and follows the highly appealing tradition of installing an easily available, American-designed V8 engine in a small, nimble, two-seater chassis to produce an exhilarating, high-performance package. Although using a tried and trusted concept, however, Beira is very much a vehicle for the 21st century, and accomplishes this with both environmental and fuel efficiency concerns in mind.

“We have received tremendous interest, and orders, for Beira already,” says Mike Rawlings. “The car debuts in left-hand drive form, underlining its appeal to enthusiasts in Europe and well beyond, and will be available in the UK and internationally via our appointed agent network from November 2008.”

The Breckland Beira on-the-road price will be confirmed shortly but is expected to be in the region of £55,000 in the UK.