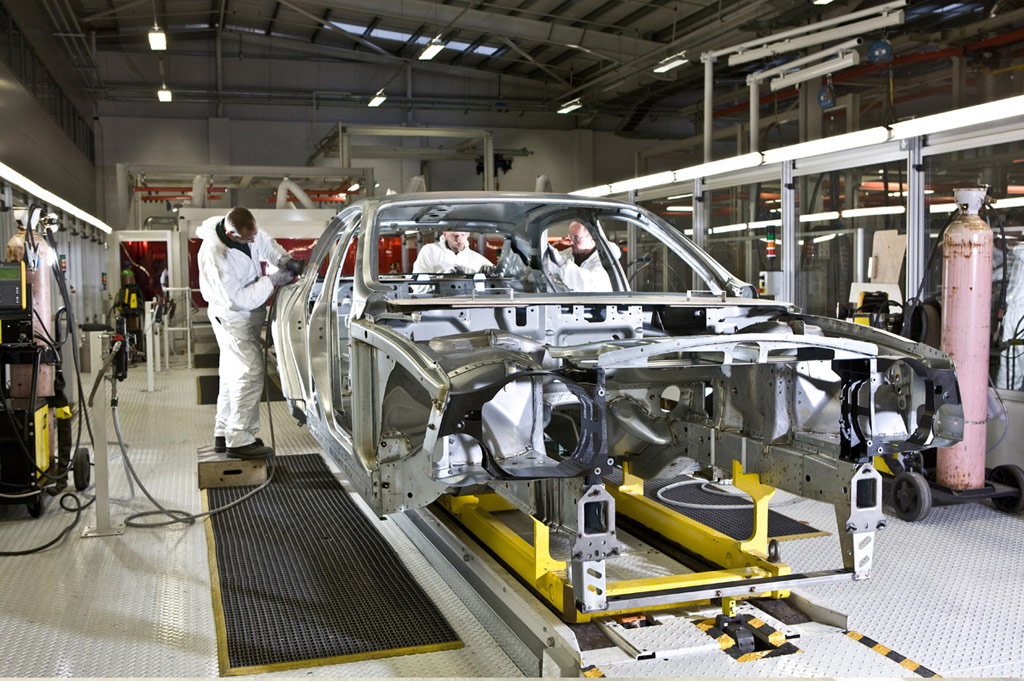 The design of the Mulsanne, Bentley’s new flagship, is a compelling fusion of sportiness, solidity and coach-built elegance – created on a grand scale. Its sweeping bonnet and long overhang convey a sense of power and movement, enhanced by the muscular haunches and sharply sculpted lines flowing gracefully from the front wings to the rear.

Now Bentley is offering an early preview of the complex processes, advanced technology, traditional British coachbuilding skills and painstaking attention to detail that will deliver the design and engineering vision of a car created without compromise.

The shining bare metal shells that will eventually become Bentley’s new flagship are created using a combination of high-strength steels and aluminium. These components are assembled into a complete shell using techniques that range from industry-leading adhesives through to hand-crafted brazing skills.

It requires 125 man-hours to create the body of a pre-production Mulsanne at the new 7,500m2 Assembly Centre. And inside the multi-million pound facility, robotic arms carrying massive self-piercing riveters work in harmony with coachbuilders renowned for their metalworking skills at the company’s Crewe factory.

For example, the Mulsanne’s hewn from solid appearance without visible panel seams is impossible in volume car manufacture. The seamless sweep of the Mulsanne’s roof, rear wing and boot can only be achieved by crafting a hand-brazed seam midway down the D-pillar, a task still best performed with ‘hand and eye’ by Bentley’s award-winning craftsmen. The quality of this type of work has earned Crewe’s craftsmen the rare distinction of a medal from the British Institute of Sheet Metal Engineering.

In complete contrast to the craftsman’s time-honoured skills, is the use of superforming which is essential to create the highly-complex three dimensional curves of the Mulsanne’s front wings. This advanced technique, primarily used by the aerospace industry, heats a single sheet of aluminium to 500 degrees centigrade and then forces it onto a single surface tool using air pressure.

As Bentley prepares to produce the very first customer cars later this year, the body assembly team are undertaking a range of exhaustive tests on the first bodies being developed in pre-production.

This includes tearing apart completed bodies with specialist cutting gear to analyse the breaking point of a seam or weld as well as minutely measuring the accuracy of finished components and bodyshells – a remarkable 588 functions and relationships are measured to ensure complete precision. In addition to cutting apart bodyshells, Bentley uses ultrasonic measuring equipment to analyse the strength and consistency of individual welds.

Gary Picken, Senior Production Manager, explains: “During these early, pre-production stages we are exhaustively testing the build process to achieve the absolute precision and quality we are seeking for our customers.”

Prospective Mulsanne customers will be able to see their cars take shape, from individual panels to finished body, in a specially designed viewing gallery. It has been created to offer a perfect view of every stage of the build process and watch the 100-strong team at work. Gary Picken adds: “The Mulsanne has a beautiful and very complex body made from an intelligent mix of high-strength steels, aluminium and composites. Within one assembly area we’re utilising traditional skills for which Bentley is renowned right alongside state-of-the-art manufacturing technology. We combine these two different approaches because it is the best possible route to create a car that will be enjoyed by generations of drivers.”