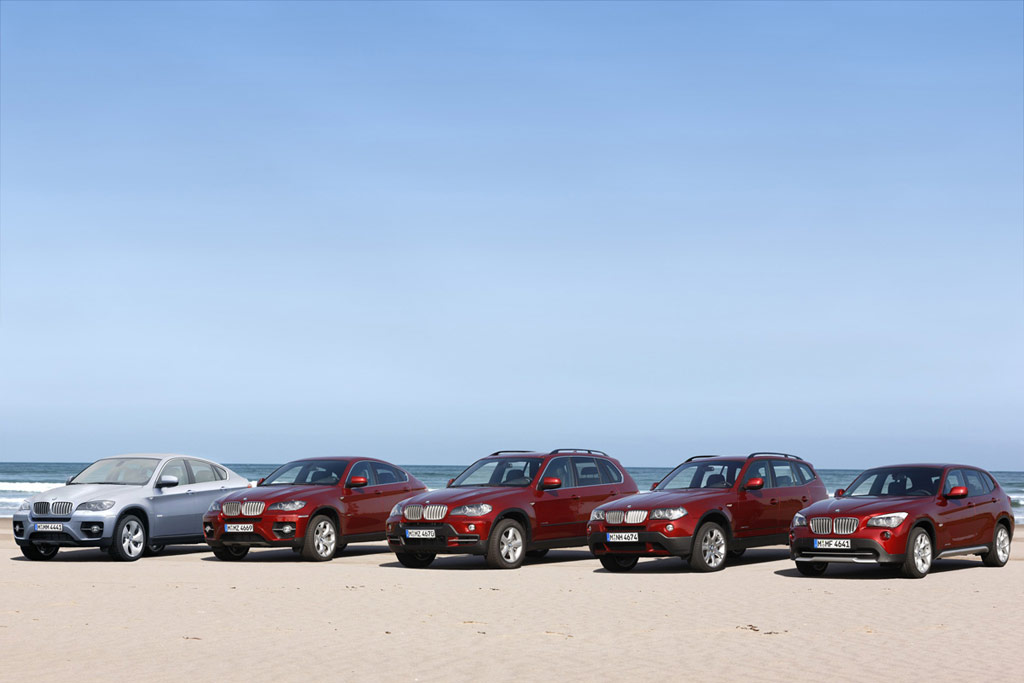 With their typical fun-to-drive qualities, superior all-wheel-drive technology and powerfully expressive styling, the BMW X models occupy a position all their own in their respective classes. The unique attractions of this concept, now successfully established in four different market segments, received further confirmation recently with an excellent showing in the latest readers’ poll by the German magazine Off Road. The BMW X5 was voted “Off-Roader of the Year” in the “Luxury SUV” category, while the BMW X1 and BMW X6 came first and second in the “Crossover” category and the BMW X3 took second place in the “SUV” category.

Topping off this strong result was a special award for the newest arrival in the BMW X family – with its launch countdown already under way, the BMW ActiveHybrid X6 took the Eco Award for its innovative powertrain. This first full-hybrid model from the BMW brand uses its highly intelligent combination of internal combustion engine and electric drive to maximise both performance and efficiency. These latest successes in the Off Road readers’ poll seamlessly continued BMW’s strong performance of the previous years. The “Off-Roader of the Year” awards, which are decided by the votes of an exceptionally knowledgeable readership, were first presented in 1982. This year readers chose from a field of 97 models in eight categories.

The BMW X5’s first place in the “Luxury SUV” category is a further indication that the Sports Activity Vehicle concept – a segment first pioneered by BMW in 1999 with the predecessor of the current model – is still a firm favourite. The combination of sporty on-road handling and surefooted off-road traction was a hit right from the start. With its intelligent BMW xDrive all-wheel drive, powerful and efficient engines and an interior which is both flexible and luxuriously equipped, the current BMW X 5 is doing even more to set the standards in its class.

In the “Crossover” category, first and second places both went to BMW. After some internal jockeying, last year’s winner, the BMW X6, was beaten into second place by its brand sibling the X1, which was launched on the market just five months ago. The X1’s concept – which extends the hallmark fun-to-drive qualities of a BMX X model to the premium compact segment – was instantly voted into the number one spot by Off Road’s readers. The BMW X1 impresses with its sporty handling, versatile interior and unrivalled efficiency for a vehicle in this category. The most fuel-efficient X1 is the BMW X1 sDrive18d, which achieves average fuel consumption of 5.2 litres/100 km in the EU test cycle. The X1’s outstanding safety standards also earned it the highest Euro NCAP crash test rating of 5 stars. In spring 2010, two new engines will be added to the range with the arrival of the new BMW X1 sDrive18i entry-level model and the six-cylinder BMW X1 xDrive25i. The X1 line-up will then comprise three petrol and three diesel engines.

Meanwhile, the appeal of the BMW X6 remains as strong as ever. The world’s first Sports Activity Coupé delivers typical BMW driving pleasure in a unique form. Agility, responsive steering, directional stability and traction have been taken to a new level – in part thanks to Dynamic Performance Control, a technology that made its debut in this model. While the electronically controlled BMW xDrive all-wheel-drive system splits the drive in a seamlessly variable ratio between the front and rear wheels to suit the current driving situation, DPC performs the same function between the rear wheels. The BMW X6 combines its outstanding dynamics with impressive efficiency, which will be further boosted by a revised engine line-up scheduled for spring 2010. The BMW X6 xDrive30d will then set new benchmarks, with an output of 180 kW/245 hp from its six-cylinder in-line diesel engine and improved average fuel consumption of 7.4 litres/100 kilometres in the EU test cycle.

The original pioneer in its segment, the BMW X3 too impresses with still unsurpassed agile handling and surefooted traction on unsurfaced terrain. Its enduring popularity has played a major role in introducing new target groups to the benefits of the xDrive intelligent all-wheel-drive system. Second place for the BMW X3 in the “SUV” category reflects the high popularity the BMW X3 continues to enjoy in its – now substantially expanded – segment. This model, which has raked in numerous awards for its outstanding reliability and safety, now comes in a choice of three petrol and four diesel versions, with power ratings ranging from 105 kW/143 hp to 210 kW/286 hp. The entry-level BMW X3 xDrive18d boasts exemplary fuel efficiency, with average EU fuel consumption of 6.2 litres/100 km.