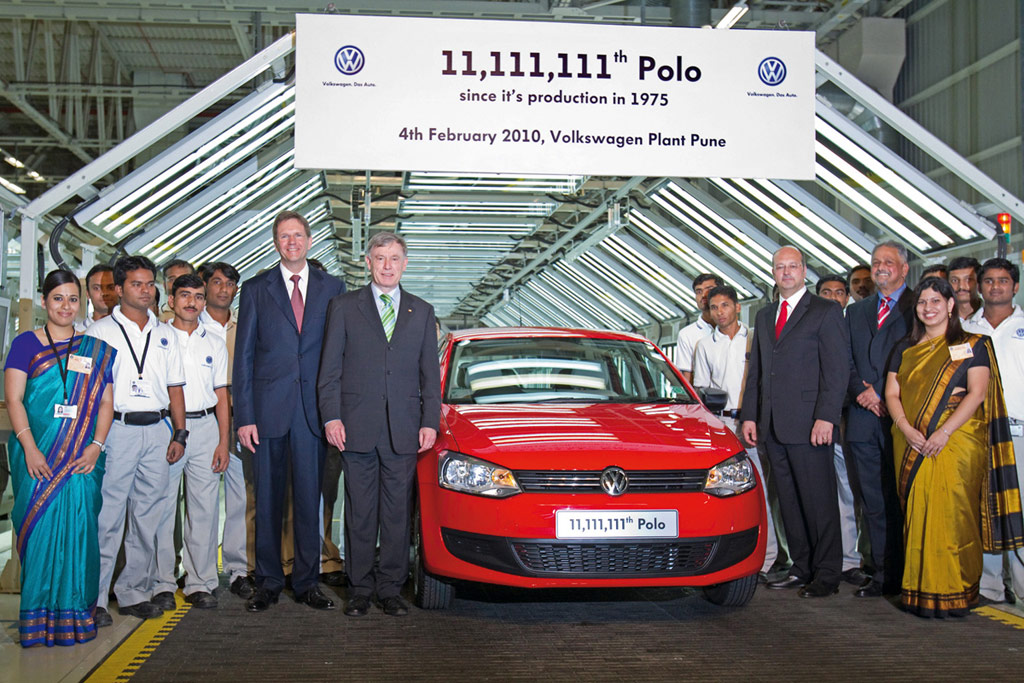 German President Köhler is guest at production anniversary in Pune. On his state visit to India, Prof. Dr. Horst Köhler, President of the Federal Republic of Germany, today visited the Volkswagen plant in Pune. The German President joined Prof. Dr. Jochem Heizmann, Member of the Board of Management of Volkswagen AG with responsibility for ‘Group Production’, and Jörg Müller, President and Managing Director of Volkswagen Group India, at the celebrations to mark the roll-out of the 11,111,111th Polo ever produced.

Heizmann welcomed the German President to the plant which was opened in 2009 and is a key element in Volkswagen’s growth roadmap in the Indian subcontinent. As Heizmann emphasized:

“The scale of investment to date and the sustainable employment opportunities for people from the region underscore Volkswagen’s long-term commitment to India. The Polo built at the Pune plant demonstrates that excellent vehicles are created when German engineering prowess interacts perfectly with Indian skills.”

Only two weeks ago, the Polo was named “Car of the Year 2010”, one of the most prestigious awards in Europe. Volkswagen began building a hatchback version of the Polo specially designed for the Indian market in December 2009.

“We are determined to bring the Polo’s European success story to India. Volkswagen will tap its opportunities in India with vehicles like the Polo, our modern plant in Pune and a highly-motivated workforce,” Heizmann continued.

“The visit by the German President, today’s production anniversary and the naming of Volkswagen Group India as “Automotive Company of the Year” just a few weeks ago inspire us to continue on the course we have set,” Müller added.

At the event celebrating the roll-out of the 11,111,111th Polo, the German President toured the new Volkswagen plant in Maharashtra State accompanied by a delegation of 30 high-ranking representatives from politics and industry. The group found out about the training programs for the newly recruited employees and the innovative production processes at the plant.

The Pune plant is one of the most modern in the Volkswagen Group and covers all stages in the production process from press shop through body shop and paint shop to final assembly. It has a maximum annual capacity of 110,000 vehicles. In addition to the Volkswagen Polo, the Pune plant also builds the Škoda Fabia.

With a total financial commitment amounting to 580 million euros, the Volkswagen plant in Pune is the largest investment to date by a German company in India. Volkswagen plans to employ some 2,500 people locally by the end of 2010.