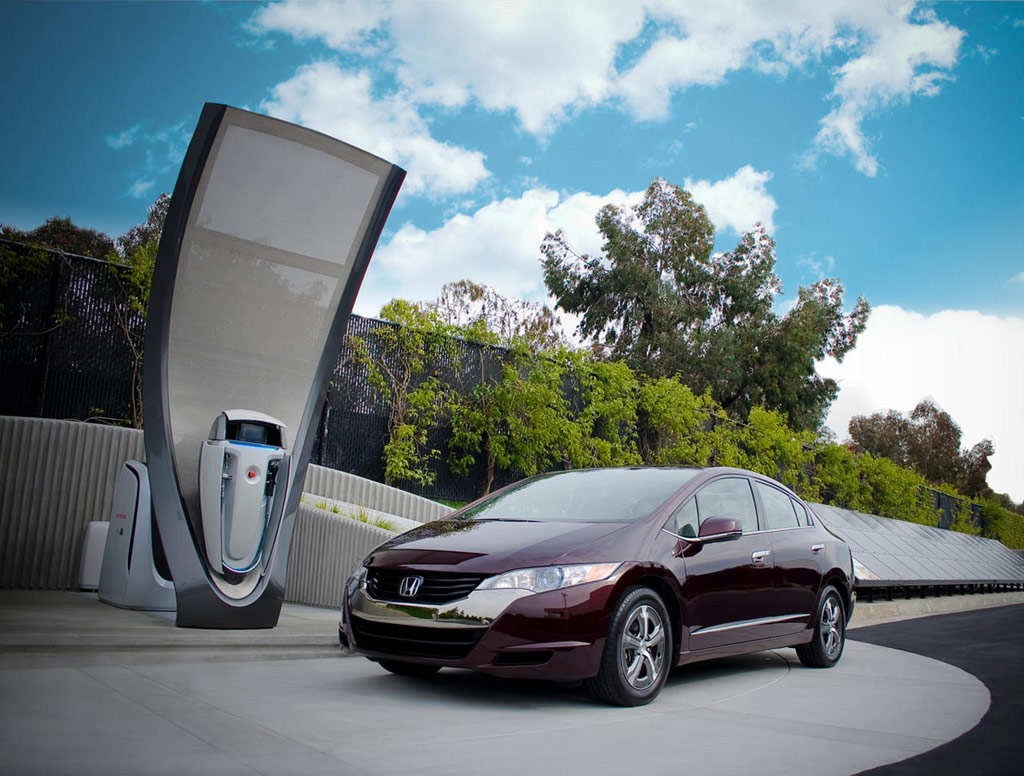 Honda today began operation of a next generation solar hydrogen station prototype at the Los Angeles Center of Honda R&D Americas, Inc., intended for ultimate use as a home refueling appliance capable of an overnight refill of fuel cell electric vehicles.

Designed as a single, integrated unit to fit in the user’s garage, Honda’s next generation Solar Hydrogen Station has a reduced size, while producing enough hydrogen (0.5kg) via an 8-hour overnight fill for daily commuting for a fuel cell electric vehicle.

The previous solar hydrogen station system required both an electrolyser and a separate compressor unit to create high pressure hydrogen. The compressor was the largest and most expensive component and reduced system efficiency. By creating a new high differential pressure electrolyser, Honda engineers were able to eliminate the compressor entirely – a world first for a home use system. This innovation also allows the size of other key components to be reduced, making the new station the world’s most compact system, while improving efficiency by more than 25% (value calculated based on simulations) compared to the solar hydrogen station system it replaces.

Compatible with a “Smart Grid” energy system, the Honda Solar Hydrogen Station would enable users to refill their vehicle overnight without the requirement of hydrogen storage, which would lower CO2 emissions by using less expensive off-peak electrical power. During daytime peak power times, the Solar Hydrogen Station can export renewable electricity to the grid, providing a cost benefit to the customer, while remaining energy neutral.

Designed for simple, user-friendly operation, the intuitive system layout enables the user to easily lift and remove the fuel hose, with no hose coiling when the hose is returned to the dispenser unit.

Engineered for an 8-hour, slow fill for overnight refilling of a fuel cell electric vehicle, the home-use Solar Hydrogen Station would replenish enough hydrogen for typical daily driving distance, meeting the commuting requirements of many drivers. As with the previous generation system, the hydrogen purity from the new station meets the highest SAE (J2719) and ISO (14687) specifications.

Designed to support the needs of the future owners of fuel cell electric vehicles, the Honda Solar Hydrogen Station was also designed to complement a public network of fast fill hydrogen stations. The Honda FCX Clarity fuel cell electric vehicle is capable of fast fill and offers driving range of 460 kilometres based on the European Driving Cycle. With fast fill public stations providing 5-minute fueling time for longer trips, and the opportunity of convenient nighttime slow filling at home using a solar station with a Smart Grid connection, the Honda FCX Clarity can cover a wide range of driving demands from the daily commute to weekend trips.

A key strategy in creating a solar hydrogen station for home-use was to create a new lifestyle with convenient, clean, energy-efficient and sustainable home refueling, by addressing the need for refueling infrastructure that can advance the wider use of fuel cell electric vehicles by consumers.

The combination of a fuel cell electric vehicle and the solar hydrogen station could help lead to the establishment of a hydrogen society based on renewable energy, resulting in a major reduction of CO2 emissions and greater energy sustainability.

Honda began operation of its first Solar Hydrogen Station at the Los Angeles Center of Honda R&D Americas in 2001: