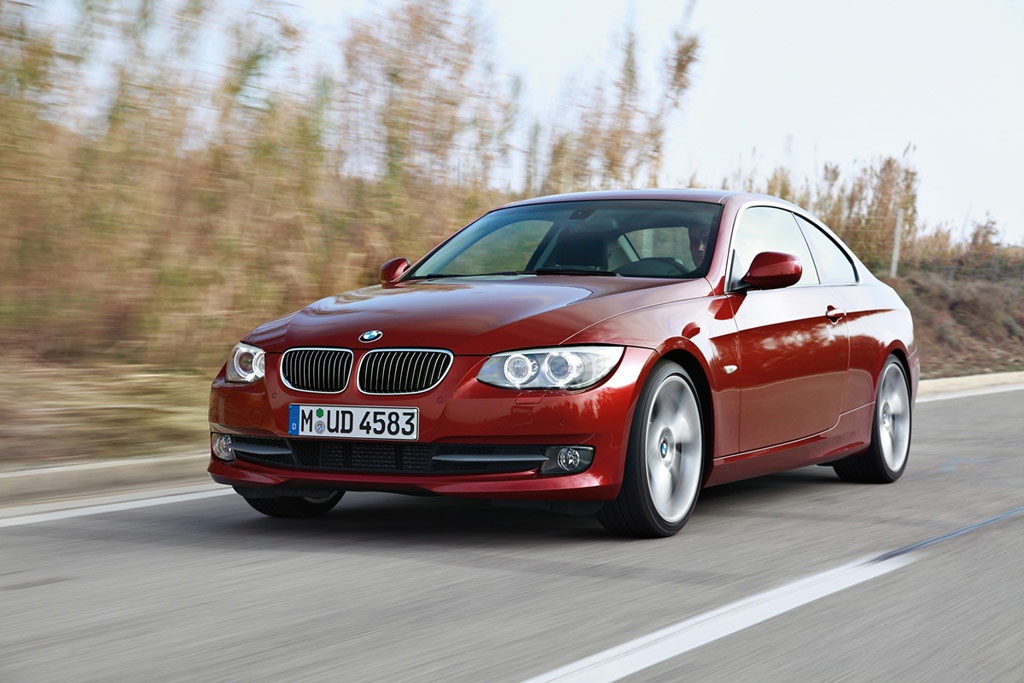 BMW has announced a raft of improvements and changes to the 3 Series range that offer owners more power and torque with lower fuel consumption and emissions. The class-leading BMW 3 Series Coupé and Convertible receive design changes and interior enhancements intended to keep both models at the forefront of their respective sectors.

Neither satisfied nor complacent about the accolades heaped on its EfficientDynamics programme in reducing CO2 emissions, the company will also launch the BMW 320d EfficientDynamics Saloon – its cleanest 3 Series ever. All the new engines and models make their debut in the UK market on March 20, 2010 and all conform to EU5 emissions standards.

A highly respectable acceleration time from standstill to 62 mph of 8.0 seconds and combined fuel consumption of 68.9mpg is complemented by CO2 emissions of just 109g/km makes this car a great choice for the business user with its predicted low lifetime running costs.

Freshened for spring: the BMW 3 Series Coupé and Convertible
Coupé and Convertible models have been an essential ingredient in BMW’s portfolio since the 1930s. It is a heritage based on contemporary style and elegance with defining features such as a long wheelbase, short front and rear overhangs, prominent wheel arches and an elongated, flowing silhouette. The current models, the third generation 3 Series Coupé and fourth generation Convertible (the first one to feature a retractable hardtop), build on this tradition. Together they account for around one third of BMW 3 Series volume.

The revised Coupé and Convertible feature new front and rear lights, a revised kidney grille, a new front air dam, rear valance and side rocker panels. The face of both models has been subtlety restyled by adding a twisted chrome band around the kidneys, new lights with bright white LED corona rings, indicators and side repeaters and an illuminated ‘eyebrow’. A new front air dam with a single large air intake is embellished with matt aluminium fins to give the car a wider and lower frontal appearance and, thus, a more dynamic look.

At the rear all red light clusters feature LED light bars and the re-styled rear bumper visually reduces the perception of height, again giving a more dynamic stance. In profile the cars are slightly longer than the former model due to the new front and rear valances – by 29mm at the front and 3mm at the rear. Contrasting character lines on the side valances and rear bumper enhance the sporting stance of both cars, while new standard wheel designs (and a new optional 18-inch alloy) and three new exterior colours, Vermillion Red, Deep Sea Blue and Mineral White, put the finishing touches to the exterior. Inside, Dakota Leather is now standard on all Coupé and Convertible models while new Anthracite Bamboo trim offers a fresh, modern feel.

M Sport variants account for 65 per cent of BMW 3 Series Coupé and Convertible sales in the UK and have been revised to reflect the refreshed models. They consist of a revised front spoiler design, a new 19-inch M Sport wheel and the new colour of Mineral White.

New models get more powerful and efficient engines
The BMW 320d Coupé and Convertible models feature a new version of the familiar and parsimonious four-cylinder diesel engine – a unit that was already class-leading before this update. It now delivers 184hp (up 7hp) and 380Nm of torque (up 30Nm). In the case of the Coupé this has shortened the zero to 62mph sprint by 0.4 seconds to 7.5 seconds, while at the same time reducing consumption by 1.2mpg to 60.1mpg and lowering emissions by 3g/km to 125g/km. The values for the Convertible are zero to 62mph in 8.3 seconds, consumption is 55.4mpg and emissions 135g/km. The BMW Coupé is capable of reaching a top speed of 147mph with the Convertible attaining 142mph.

Nor has the flagship 335i derivative been ignored: although power and torque remain the same at a hearty 306hp and 400Nm, consumption and emissions have been significantly reduced. This has been made possible on this award-winning engine by combining a single turbocharger with VALVETRONIC variable valve management and High Precision Direct Injection for the first time. For example, the Coupé’s fuel consumption is eight per cent lower at 33.6mpg while CO2 output drops by over ten per cent to 196g/km. Owners will also pay less tax each year since the 335i drops down a VED band to J. The BMW 335i Convertible also drops a VED band from L to K.

The BMW 335d Coupé has been refreshed resulting in an improved fuel consumption figure and lower CO2 emissions. It now records 42.8mpg on the combined cycle, an improvement of 0.6mpg, and 174g/km. The latter point means the car now qualifies for VED band H, a tier below its previous position.

Most efficient BMW 3 Series ever goes on sale
The new BMW 320d EfficientDynamics Saloon offers the strongest demonstration yet of the success of the company’s pioneering EfficientDynamics programme. This new model is, for the moment, the best example of the art of the possible, not by using hybrid technology or electric power but by refining still further the enduring internal combustion engine.

It is the cleanest, most efficient BMW ever. At 109g/km it is the first premium car with CO2 emissions under 110g/km and manages to eke out 68.9mpg from a single gallon of fuel on the combined cycle. Such figures will be a source of joy not only for private buyers paying out £1.10 a litre and rising, but also being in VED band B, the annual road tax is just £35.

Company car drivers and fleet managers will be delighted for the same reasons but also because the BMW 320d EfficientDynamics Saloon attracts only 13 per cent benefit in kind for drivers. Companies also benefit from the opportunity to write down 100 per cent of its value in the first year, and claim tax relief against profits, greatly improving cash-flow. The cash flow benefit and the lower cost of money should see contract hire rates fall by up to five per cent over 36 months, according to the fleet industry. (Compared to equivalent vehicles with emissions above 110g/km).

There is yet another reason why drivers of the BMW 320d EfficientDynamics Saloon will be happy. This car does not achieve such niggardly consumption at the expense of driving pleasure: this is no ‘vanilla’ driving experience at the cost of carbon sobriety. The revised engine produces 163hp and 380Nm of torque enabling the 320d EfficientDynamics Saloon to sprint to 62mph in 8.0 seconds, accelerate smoothly in fifth gear from 50 to 75 mph in 9.1 seconds and reach a top speed of 142mph. Peak torque is available from 1,900rpm ensuring flexibility where the driver needs it.

The remarkable range of abilities displayed by the BMW 320d EfficientDynamics Saloon is due not only to the full range of EfficientDynamics elements already described, but also to some new technologies that take the concept to a new level. It uses the same new all-aluminium 2.0-litre diesel engine announced above with developments to minimize friction and improve thermodynamics – resulting in more efficient motoring that is easy and comfortable to achieve.

Diesel engines are most efficient at lower engine speeds, but they suffer greater vibration at low revs. The challenge for BMW’s engineers was to minimize engine noise and restore comfort to allow drivers the use of lower revs. They achieved this by deploying centrifugal pendulum absorbers within the two mass flywheel to compensate for the rotational lack of balance at lower speeds. With this problem solved they could now choose a longer final drive ratio and a gearshift indicator that encourages earlier up-shifts. These technologies allow drivers to spend a greater proportion of time in a higher gear and at a lower engine speed, thereby lowering fuel consumption.

In addition, the chassis ride height has been lowered by 15mm, unique 16-inch ‘aero’ wheels are standard fitment and these are equipped with tyres with a lower rolling resistance, all measures to improve aerodynamics and reduce drag.

Continuing with the philosophy for BMW EfficientDynamics, BMW will not charge extra for all the measures that make the impressive performance figures possible. Therefore the BMW 320d EfficientDynamics Saloon will share exactly the same retail price as the 320d SE Saloon. The cleanest 3 Series ever has a retail price of £26,480 (£27,280 OTR) and shares an identical specification (excluding 16-inch aero alloy wheels) including automatic air conditioning, rear Park Distance Control and an auto dimming rear mirror, to mention but a few.

New additions for the BMW 3 Series Saloon and Touring ranges
BMW has been hard at work on other engines to meet the challenge of marrying the benefits of a rewarding drive with a sustainable future. Hence the introduction of a new diesel engine for the BMW 3 Series Saloon and Touring that, with its sub 120g/km emissions, will prove to be a key car for the business buyer.

The BMW 318d has a 2.0-litre turbocharged unit with variable vane technology and common rail direct fuel injection. It delivers 143hp and 320Nm of torque from only 1,750rpm. The 20Nm boost helps the 318d Saloon to reach 62mph in 9.1 seconds (Touring is 9.4 seconds) while both go on to reach a top speed of 130mph. On the combined fuel consumption cycle the Saloon achieves 62.8mpg and emits only 119g/km of CO2 (Touring records 62.8mpg and 120g/km).

Both models have lowered emissions enough to drop below the critical 120g/km threshold putting them in band C for VED and just 13 per cent benefit in kind taxation. BMW expects this to give it a clear advantage against key competitors in the battle for corporate sales.

The BMW 316d Saloon can now be specified with optional 17- or 18-inch alloys instead of only being offered with 16-inch alloy wheels for enhanced customer choice.

EfficientDynamics moves the game on
It is interesting to reflect on just how far diesel technology has come in a dozen years. Back in 1997 the zenith of the diesel art was the BMW 325td Saloon, a car with 25 per cent more capacity than today’s standard BMW 320d Saloon. The intervening years have made the 325td look sluggish and thirsty by comparison. Today’s standard 320d Saloon, not the 320d EfficientDynamics Saloon variant, has 58 per cent more power, 71 per cent more torque, 36 per cent lower emissions and consumes 58 per cent less diesel. At 7.5 seconds to 60mph it is also 4.5 seconds or 38 per cent quicker. That is progress.