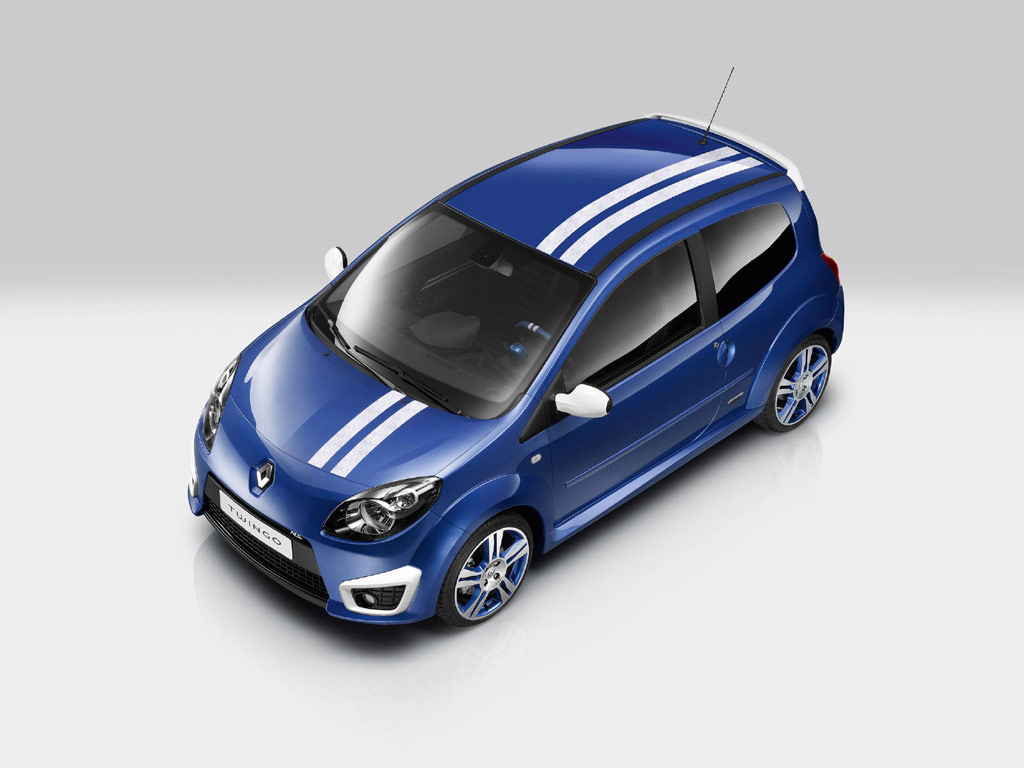 The Gordini name returns with the introduction of the Twingo Gordini Renaultsport. This latest version of Renault’s pocket rocket takes a fresh stance on the design cues long-associated with the Gordini world.  Just as before, the combination of French blue, white racing stripes and stylish, quilted leather upholstery forms an integral part of the package -but with a distinctly modern touch. The latest Renault hot hatch will appeal to customers looking for a distinctive car with an assertive character, exuding an unmistakably French feel – a fitting tribute to everything for which the Gordini signature stands.

Twingo Gordini Renaultsport is premiered until 10 January 2010, at the Atelier Renault on the Champs-Elysées, in Paris, as part of the prestigious showroom’s ‘Christmas in Blue’ exhibition. It will go on sale across Europe from March 2010.

Twingo Gordini Renaultsport features a gleaming Malta Blue metallic finish, plus two white racing stripes, in keeping with tradition. The front and rear bumpers are enhanced by gloss black centre sections, while the fog lamp surrounds, exterior door mirror housings and rear tailgate spoiler are all picked out in a contrasting white finish.

‘Gordini Series’ badging either side refers back to the 1960’s heyday of the Gordini Cup in France when the qualifying heats of the different race meetings were known as séries.

This exclusive exterior styling package is rounded off by 17-inch alloy wheels with a polished face and a choice of the inner rim finished in either blue or black.

The same Gordini spirit continues inside thanks to:

To ensure that it befits Gordini’s glorious motor sport heritage, the latest addition to the Twingo range is based on the same performance/equipment package as the Renaultsport 133 version:

Twingo continues to enjoy considerable success in the European A-segment, with sales between January and the end of October 2009 amounting to 140,700 cars, an increase of 20 per cent over 2008.

With 83,000 cars sold in France (an increase of 53 per cent over 2008), Twingo has emerged as the best-selling small city car for the second year running and accounts for almost one sale in three in the sector.

The Renaultsport versions of Twingo are the segment’s best-selling small sporting models and contribute to promoting Twingo’s dynamic image.

Twingo Gordini Renaultsport. is expected to win over customers looking for a sporty car with refined, distinctive styling. The newcomer combines the very best that the Twingo line-up has to offer with an indisputable Gordini flavour.

Amédée Gordini, who developed almost 200,000 Renault vehicles over a 20-year period, achieved some of the brand’s greatest sporting achievements.

Born in 1899, within a year of Louis Renault building his very first vehicle, Amédée Gordini was fascinated by automobiles and motor racing from a very young age. After working as a racing mechanic in his teens, Gordini developed his own sports racing and Grand Prix cars before being engaged by Renault in the mid-1950s. The Renault 8 Gordini with its bright blue paintwork and twin white stripes was one of his most successful and iconic creations, finishing 1st, 3rd, 4th and 5th in the 1964 Tour of Corsica rally. In 1966, the 1300cc version heralded the Gordini Cup one-make race series, the blueprint for all single-make motorsport championships.