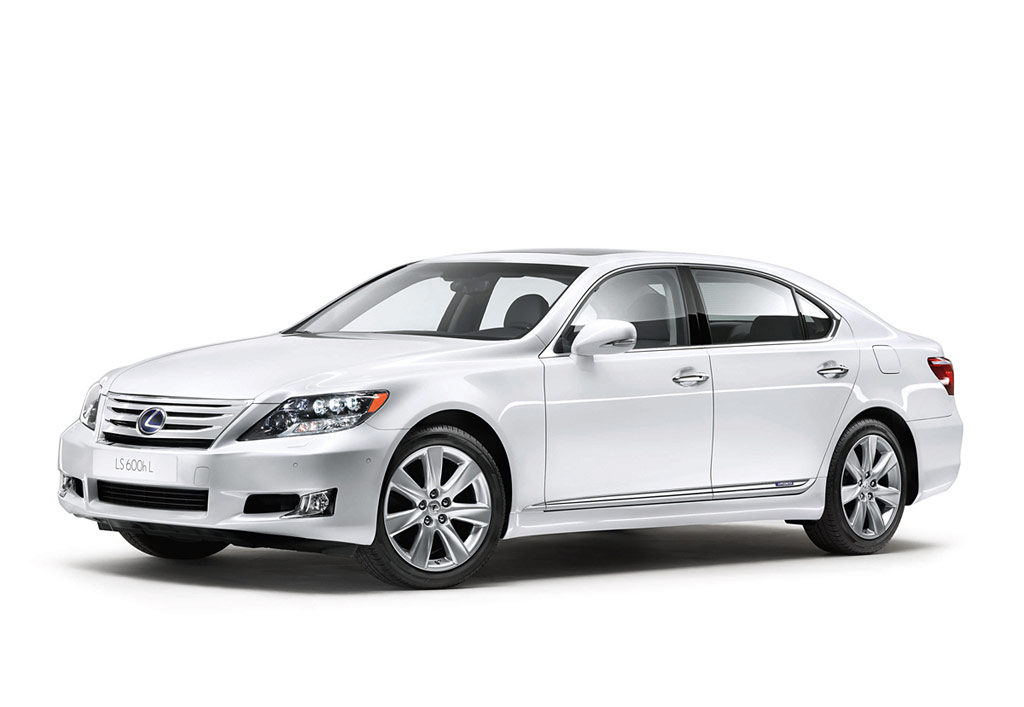 The LS 600h, the full hybrid Lexus flagship, gains a range of technological and styling improvements for the 2010 model year, changes that have been unveiled for the first time at the Frankfurt motor show.

The relationship between movement of the accelerator pedal and system output is automatically controlled, reducing response to aggressive inputs to improve fuel economy and promote smoother driving. The load on the engine is also reduced under acceleration, which also helps improve fuel efficiency.

When the outside temperature is 20°C or higher, the air conditioning system automatically selects its air recirculation mode to reduce power consumption. The blower airflow is reduced when set to “high” and operation of the supplementary electrical heating system (the PTcompact heater) is stopped, further cutting the amount of power used. Also, the system will not signal for an increase in engine speed to boost power when the vehicle is at idle.

Repackaging of the full hybrid system’s battery into two sections of six and 14 modules has reduced its overall size and freed up more luggage space in the boot.

Further development of the Lexus Hybrid Drive system has been revised to meet Euro V exhaust emissions standards, but with no change to the car’s performance: the combination of the 5.0-litre V8 petrol engine and 165kW electric motor produces a maximum 439bhp and 520Nm of torque, giving nought to 62mph acceleration in 6.3 seconds. CO2 emissions are 219g/km and combined cycle fuel economy remains 30.4mpg (figures provisional prior to UK homologation).

Exterior styling
The revised model is distinguished visually by a new four-bar grille and front bumper with redesigned air intakes and foglamps. The headlamps have a new running light design and are finished in Lexus hybrid blue, giving the car a distinctive appearance befitting its flagship status.

In profile, the car has a new one-piece rocker moulding and new door mirrors that incorporate twin LED turn signals and puddle lamps, with chrome highlights.

Further new details include a lower bumper design with vertical fins to smooth the airflow from beneath the car. The range of exterior colours has been increased, with Mesa Red, Vanilla Mist, Richmond Green and Atlantic Blue newly available, together with the hybrid-exclusive Crystal Sapphire. The paint has a new Self-restoring Coat treatment that helps maintain a superb finish over the vehicle’s lifetime.

Interior features
In the cabin the instrument binnacle has been revised to include a new full colour, TFT LCD display. A new meter design features a three-ring analogue dial with a central speedometer, a tachometer and coolant temperature gauge to the left, and a fuel gauge and hybrid system indicator to the right. A display

in the centre of the speedometer can be customised to display vehicle information, turn-by-turn navigation instructions and hybrid system status.

The upper air vents have been set apart from the instrumentation on the centre console, giving the dashboard a strong horizontal emphasis. The EMV multi-display touch screen has large switches and rearranged layout for the audio controls. The audio switch is now made of aluminium, adding to the premium feel and quality of the design.

New seating features
Both front seats are equipped with new, inflator operated active headrests. Activated by a signal from the airbag ECU in the event of a rear impact, the inflator slides a piston into the headrest, unlocking a mechanism that projects the headrest forwards and upwards, reducing the risk of whiplash injury.

The driver’s seat also has a new return/away function. Linked to a similar function that moves the steering wheel, this automatically slides the seat back by up to 50mm when the driver unbuckles the seatbelt and turns the engine off. The seat returns to its selected driving position once the car is started again.

For the new model year the LS 600h is available with the Lexus Rear Seat Relaxation Pack for the first time in conjunction with a five-seat configuration.

The premium seat arrangement has a 40:20:40 design with an upper seatback reclining mechanism, fully retractable leg and footrest and lower back massage function, all operated using a remote controller. It also offers different levels of massage using an array of eight pneumatic chambers built into the seatback, and lumbar and shoulder areas.

The horizontal suspension position of the rear seat has been moved forwards 45mm to improve fit around the hips and the shape of the seat surface over the outer edges has been plumped up by around 10mm for better support.

The centre armrest has been redesigned too, fitted with a sliding lid and housing controls for the seats, earphone jack points and the remote control for the relaxation system. The seats have integral side airbags and the seat behind the front passenger in the Rear Seat Relaxation Pack has a seat cushion airbag to give the occupant extra restraint below the hips in the event of a collision.

Models fitted with the Rear Seat Relaxation Pack also offer an extra 40mm in the forward sliding range of the front passenger seat. Operated in conjunction with the retractable leg and foot rest, this allows the seat to be moved to its full front or return position using a switch in the rear centre armrest, or on the shoulder of the seat itself. When the front set is moved to its furthest forward position, its headrest is automatically retracted to give a clearer view from the rear.

Reducing the size of the rear air conditioning unit has increased boot capacity by approximately 35 litres.

The 19-speaker Mark Levinson Premium Surround Sound System fitted as standard in the LS 600h gives 7.1-channel surround sound on selected CDs and DVDs. It is now DAB ready (DAB audio will be available as a centre-fitted accessory) and provides USB and audio jack plug connection for fully controlled use of portable music players, and Bluetooth with an audio streaming function.

It also provides a new “sound library” function, using the navigation system’s HDD to transfer and store music files from CD up to 10GB capacity – the equivalent of about 2,000 music tracks.