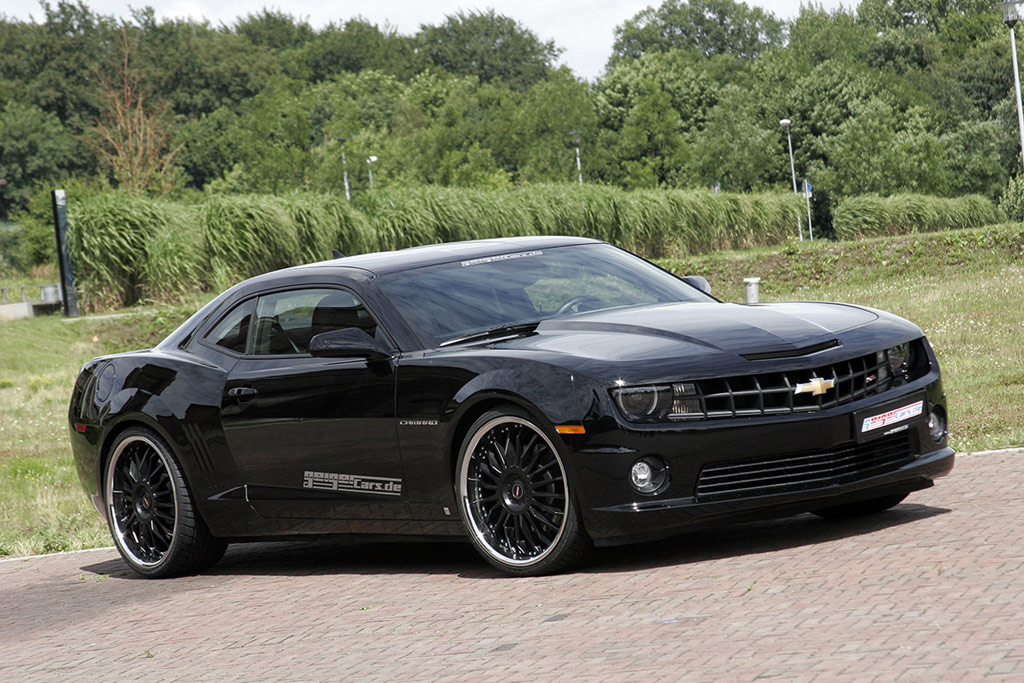 The trio is complete. After the Ford Mustang and the Dodge Challenger, Chevrolet perfects the revival of the legendary pony cars with the new Camaro.

From 1966 to 2002 Chevrolet manufactured four generations of the Camaro. First series models that are in very good condition are prized collectors items. When the US manufacturer unveiled the concept model of a totally new Camaro at the Detroit Motor Show in 2005, the public response was so outstanding that the series production of a fifth generation of the four-seater coupé was decided and with that, the remake of an American legend. The new vehicle no longer has anything in common with the often unpopular fourth generation car. In fact, the designers have combined retro elements and modern shapes, designed an aggressive front end, a bulky rear as well as stylish sides and roof – an unmistakable homage to the muscle cars of the sixties and seventies.

In the last few days, one of the first new Camaros arrived by plane from across the Pond and rolled from the airport right into the GeigerCars.de showroom in Munich. As of now, you can not only marvel at the four-seater coupé, you can also order one there…

The Camaro LS and LT models are already fitted with a superior 308 horsepower 3.6 litre V6 engine. The modern light metal engine generates 5200 revolutions per minute, an impressive 370 newton metres. The design of the SS (SuperSport) model engaged V8 with a superior 6.2 cylinder capacity is even more notably defined. This is available in two variations which perform up to 432 HP and send a maximum torque of 569 newton metres towards the powertrain.

On the subject of the powertrain: the six and eight cylinder engines can be combined with both a six-speed manual transmission and six-speed automatic transmission. Needless to say, the Camaro is equipped with rear wheel drive. The chassis is modern: Chevrolet has installed a Multi-Link strut front suspension and an independent rear suspension. There are adjustable coil springs, gas-assisted shock absorbers and an anti-roll bar fitted on both front and rear.

All round ventilated anti-lock disc brakes are standard in all Camaro models. Chevrolet equips the V8 models with factory-provided four- piston Brembo brakes which measure 355x32mm and 365x28mm.
The Super Sport models separate themselves from the rest by their colour coded finished bumpers, special front grille, low rear spoiler with diffuser, air scoop and air ducts for cooling the brakes. The mandatory rear spoiler is also available for the LT models at an additional cost. The SS coupés run on 8×20 and 9×20 inch light metal wheels and 245/45R20 front tyres and 275/40R2 rear tyres as standard.

However, Karl Geiger would not be the man he is if he could not already provide an extensive tuning programme for the new Camaro. The house specialty is the famously sophisticated compressor reconstruction. With a mechanical compressor, Geiger pushes the engine power of the Camaro SS to a roaring 568 HP. At 4100 rpm, the maximum torque is 799N m. The hot flue gas stream leaves the combustion chamber via a fan-type elbow with sport catalysts and roars through the stainless steel Geiger manufactured sport exhaust system.

A two plate sport clutch is responsible for the traction with the transmission. After the reduction of the end gear ratio, the Geiger Camaro reaches an impressive 314km/hr and even shows up the Porsche 911 GT3.
In order to have this power totally under control, GeigerCars.de have not only installed coilovers and adjustable sports anti-roll bars on front and rear axels but also a strong braking system. At the front there are six piston saddles with grooved 380mm plates and four piston saddles on 355mm (grooved) brake discs operate the drive shaft.