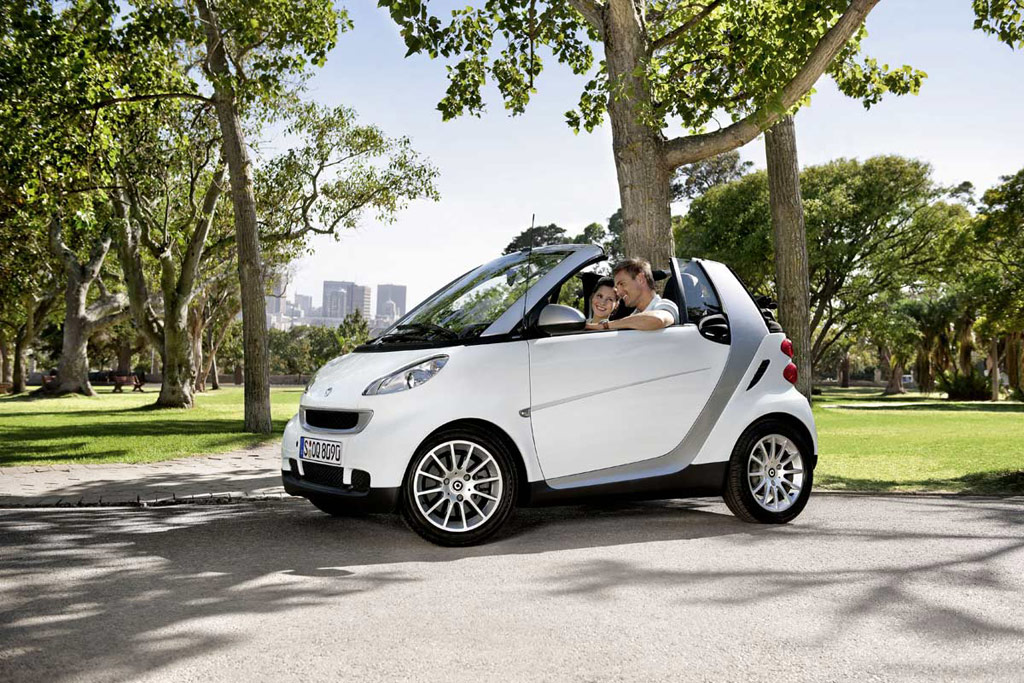 For model year 2010 the smart fortwo cdi has been given a clear power boost, yet it remains just as economical and environmentally friendly as before. In future the state-of-the-art three-cylinder diesel engine will produce 21 percent more power and deliver approximately 18 percent more maximum torque. Although this extra power makes the popular two-seater car noticeably livelier, it does not affect its exemplary fuel consumption. As before, it consumes just 3.4 litres of diesel per 100 kilometres (NEDC). Furthermore, with CO2 emissions of 88 g/km it continues to assert its leading position as the CO2 champion. In addition, from model year 2010 all versions of the smart fortwo including the BRABUS variants will comply with the strict emission limits of the EU5 standard.

The smart fortwo enjoys the worldwide reputation of a car that is perfect for the times we live in. Thanks to its unique concept it takes up minimum road and parking space, boasts low fuel consumption and carbon dioxide emissions and combines mobility, ecology and joie de vivre in a unique way. For the new model year smart is uncompromisingly continuing its philosophy and making the smart fortwo even more environmentally friendly and attractive.

The most important change: the smart fortwo cdi with a length of 2.69 metres is redefining economy and driving fun. Its reengineered diesel engine now has an output of 40 kW/54 hp – seven kW or 21 percent more than its predecessor. Moreover, the new three-cylinder engine delivers maximum torque of 130 Newton metres (an increase of 18 percent). This makes the car that is brimming with lifestyle appeal even more agile and fun to drive. Thanks to the power boost it now sprints from 0 – 100 km/h in just 16.8 seconds. However, the increased liveliness does not affect the outstanding fuel consumption and emission figures of the trendy two-seater car. The combined fuel consumption still stands at 3.4 litres per 100 kilometres and the extremely low CO2 emissions of just 88 g/km mean that the smart fortwo cdi is still the CO2 world champion among all production cars with combustion engines.

The 21 percent power increase is primarily realised through modified pistons in conjunction with adjusted injection and charge pressure parameters. Furthermore, thanks to the increased torque it was also possible to lengthen the gear ratios of the third and fourth gears by ten and eleven percent respectively, and to lower the shifting points in the automatic programme. This reduces the rpm level in speed ranges used particularly frequently – with benefits in terms of fuel consumption and noise level. The smart fortwo cdi is equipped with a closed diesel particulate filter and emissions are below the limit values laid down in the EU5 standard.

Thanks to optimised engine and transmission management the petrol models of the popular two-seater car also comply with the demanding EU5 exhaust gas standard. Not only does this help the environment – in many countries it entails clear tax advantages.

New contrast components in shiny pearl black, which further upgrade the interior of the smart fortwo, and a new folding armrest available as an option, provide for increased comfort.

Further optional equipment includes the smart hands-free system with a colour display and extensive multimedia functions. It features the sassy design typical of the brand, a Bluetooth® interface, voice control and optional iPod® connection and is perfectly integrated in the vehicle electronics and the audio system. It is simple and safe to operate via a wireless controller on the centre console.

All updated smart fortwo variants can be ordered now. The prices for the petrol models are unchanged. In future the 40 kW/54 hp smart fortwo cdi will cost €11 790 as a coupé in the pure equipment line (German price incl. VAT).