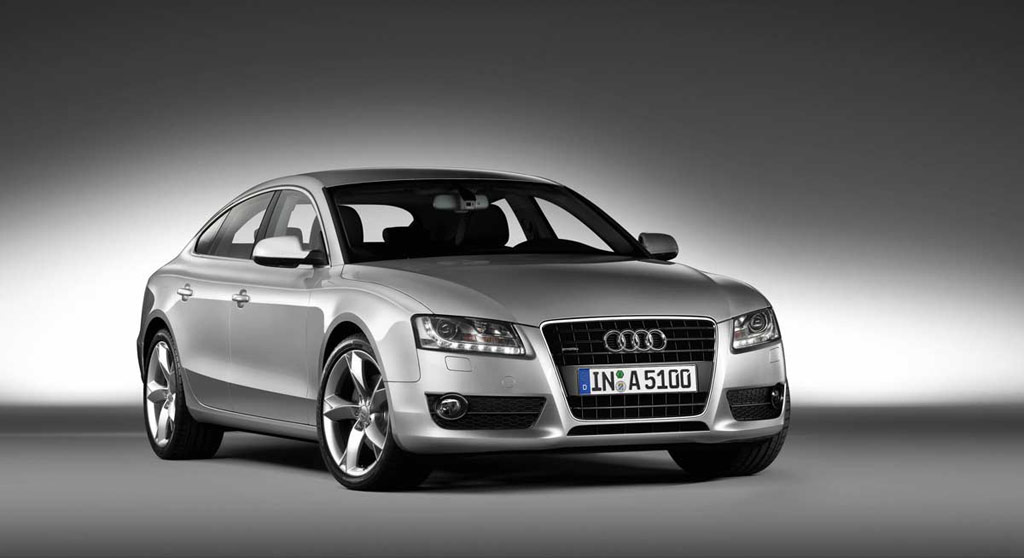 Audi is presenting a new vehicle concept – the Audi A5 Sportback. The five-door model with the long, flowing rear end unites the best of various vehicle genres: the emotion and elegance of a coupe, the comfort of a sedan and the practicality of a station wagon. The Sportback joins the Coupé and Cabriolet as the third member of the A5 model family.
The A5 Sportback will be rolling into Audi dealerships in September featuring an emotion-packed design, high everyday practicality, a sporty character and engines that are as efficient as they are powerful. Sales have already begun, with prices starting at 33,650 euros. A further, specially-priced model to follow in 2010 will make the A5 Sportback the entry-level model in the A5 model series.

Audi, the inventor of the Avant, is setting new trends in design with the A5 Sportback. The five-door coupe is defined by elegant lines. It is 36 millimeters (1.42 in) lower than the A4 Sedan; with its short front overhang, long wheelbase, wide track and the four frameless doors with their slender window lines, it is the very picture of sporty elegance.
The interior is spacious, offering uncompromising comfort in all four seats. The large luggage compartment hatch is harmoniously integrated into the long, tapered tail end with the flat C pillars; the spoiler lip underscores the tension-filled character. The luggage compartment volume of 480 liters (16.95 cu ft) nearly matches that of the A4 Avant and increases to 980 liters (34.61 cu ft) with the rear seats folded down.

The A5 Sportback follows the consistent path of innovative technologies at Audi when it comes to the drivetrain. All of the engines are highly-efficient direct injection models – TDI for the cultivated diesels, FSI for the gasoline engines – and all comply with the Euro 5 emissions standard.

All models are equipped with a recuperation system that recovers energy during braking and deceleration and stores it temporarily in the battery.

Audi is initially offering three gasoline and three TDI engines, with three more engines to follow by mid-2010. The gasoline engines – the two-liter TFSI with 132 kW (180 hp) or 155 kW (211 hp) and the 3.2-liter V6 with 195 kW (265 hp) – are equipped with the Audi valvelift system for variable control of valvelift. The intelligent technology boosts performance while simultaneously reducing fuel consumption.

The 2.0 TDI produces 125 kW (170 hp) and consumes on average a frugal 5.2 liters of fuel per 100 km (45.23 US mpg). It is coupled with the start-stop system, which further enhances fuel efficiency in city traffic. The 140 kW (190 hp) 2.7-liter TDI offers even more power. The 3.0 TDI, which also features the S tronic, puts out an impressive 176 kW (240 hp).
Like the three gasoline engines, the top diesel engine delivers its power to the quattro permanent all-wheel drive system. The two most powerful engines are optionally available with the newly developed sport differential, which variably distributes power between the rear wheels and provides even greater dynamics, driving pleasure and safety. The two TDI models with front-wheel drive – the 2.0 TDI and 2.7 TDI – and the 2.0 TFSI (132 kW / 180 hp) benefit from another Audi innovation: The ESP stabilization program with electronic front differential lock increases agility and prevents understeer.

The perfect complement is the Audi drive select vehicle dynamics system, which enables the driver to freely vary the throttle response characteristic, the shifting points of the seven-speed S tronic, and the boost provided by the servotronic steering system, which comes standard (from power outputs of 140 kW (190 hp) upwards). The system is offered as a modular package with at least one of the following three options: sport differential, adaptive shock absorber control or dynamic steering with variable boost.

The equipment, specifications, and prices stated herein refer to the model line offered for sale in Germany. Subject to change without notice; errors and omissions excepted.