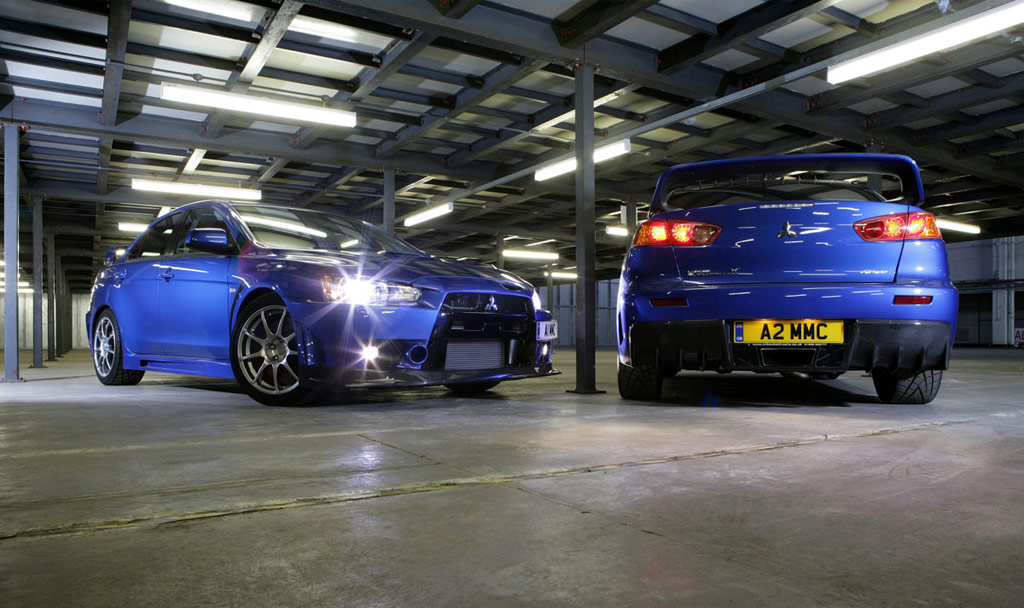 The Mitsubishi Lancer Evolution X FQ-400 by WRC Developments is the fastest and most extreme version of Mitsubishi’s motorsport derived machine. With 403bhp and 387lb.ft of torque on offer from its advanced, lightweight aluminium 2.0-litre turbocharged MIVEC (Mitsubishi Innovative Valve timing Electronic Control) petrol engine the FQ-400 is able to reach 62mph from standstill in an estimated 3.8 seconds before reaching an electronically limited 155mph ‘ where permitted.

Ensuring all the FQ-400’s power is put to good use is a Mitsubishi’s sophisticated Super-All Wheel Control (S-AWC) four-wheel-drive system which appropriates power to the wheels that can best use it, giving the FQ-400 quite sensational cross-country performance.

The S-AWC system combines a number of electronic systems that both enhance the FQ-400’s performance and safety, with Active Stability Control and Active Centre Differential, Active Yaw Control and Sport ABS giving the FQ-400 incredible cornering ability, traction and grip. Depending on the conditions the driver can select the most suitable set-up for the S-AWC system, three choices ‘ Tarmac, Gravel and Snow ‘ being offered via the wheel-mounted button and displayed in the central instrument binnacle.

To achieve the incredible 403bhp from just 2.0-litres Mitsubishi has had to significantly revise the FQ-400’s advanced powerplant. Motorsport specification high-flow fuel injectors are fitted to the aluminium cylinder head and a new hybrid turbocharger is also fitted. The higher specification turbocharger features low-friction bearings, a high temperature turbine and strengthened thrust bearing to increase response and reduce turbo lag. Feeding the turbocharger cooled air, improving its performance and efficiency, is an enhanced intercooler, while the exhaust’s gasses flow from the engine via a 3-inch diameter high flow stainless steel piping and catalytic convertor before exiting through a centrally positioned exhaust.

Mitsubishi has remapped the Engine Control Unit (ECU) extensively with over 500 hours of development time to allow its 2.0-litre turbocharged engine to not just produce its exceptional output but to do so with excellent driveability. The FQ-400’s acceleration is sensational, it pulling hard through the gears regardless of engine revs. With peak torque of 387lb.ft on offer from just 3,500rpm, the FQ-400 is just as able to trickle through town traffic as it is talking a rally special stage.

The FQ-400 by WRC Developments looks every bit the rally refugee too, giving a strong ‘nod’ to the styling cues of the legendary Evolution VI, and builds on the already aggressive style of its Lancer Evolution X FQ relatives.

Despite its obvious focus the FQ-400’s suspension offers compliance thanks to the Eibach Springs and Bilstein Shock Absorbers, the FQ-400’s usefulness as a daily driver not compromised overly thanks to Mitsubishi’s chassis tuning. The stiff bodywork not only provides an exceptionally rigid platform for the suspension to work, but excellent crash-worthiness, the Lancer Evolution X attaining a five-star score in Euro NCAP’s independent crash tests. The FQ-400’s S-AWC and its incorporated stability, traction and braking systems helping avoid an accident in the first place. Even so there’s reassurance of seven airbags, seat belt pretensioners and ISO Fix child seating as included in its standard specification.

Standard equipment for the range-topping Lancer Evolution X model is comprehensive, the FQ-400 coming with Bluetooth hands-free telephone connection, a CD-tuner with 30 Gig hard drive, DVD satellite navigation and privacy glass. Convenience features like remote central locking, automatic headlamps and windscreen wipers increase the FQ-400’s ease of use, the huge performance it offers not coming at the expense of usefulness. Like its Lancer Evolution X relatives it features comfortable seating for five as well as a usefully sized boot, the FQ-400 bringing all the convenience of the standard saloon car it’s based upon ‘ but with explosive performance potential.”’

Standard it’s not though, instead the FQ-400 by WRC Developments is a standard setter, with performance that’s the measure of any rival and many exotic sports and supercars costing many multiples of its ‘49,999 list price. Available from June 2009, the FQ-400 is covered by a three year / 36,000 mile warranty.