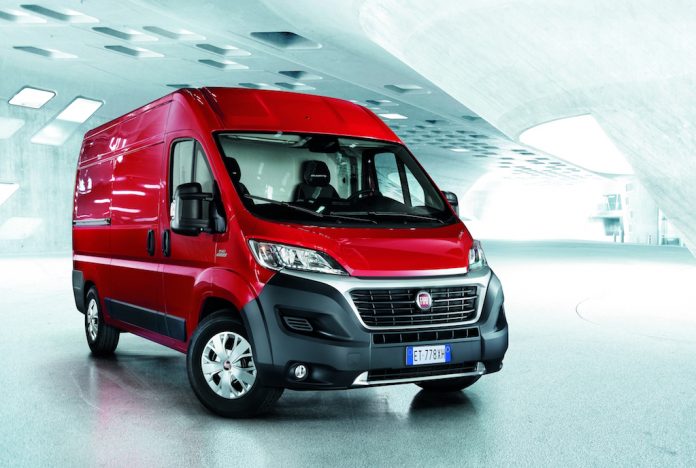 The sixth generation of the hugely successful FIAT Professional Ducato, which has notched up 2.9 million sales over six generations since it was first launched in 1981, continues to set the segment benchmark not only in Europe but also in the 80 international regions in which it is on sale. It also sets the standard for motorhome base vehicles, accounting for 75 percent of motorhomes sold in Europe with more than 600,000 on the road to date.

To retain its leading role in the segment, the FIAT Professional Ducato was completely restyled in 2014 to accommodate the new requirements of customers, offering more technology, more efficiency and more value, as well as improvements in performance, active and passive safety, infotainment, durability, robustness and running costs.

For 2016 the FIAT Professional Ducato improves even further thanks to the introduction of  a comprehensive range of class-leading Euro 6 engines, exclusively employing Low Pressure Exhaust Gas Recirculation system (LPEGR) to lower NOx emissions without the complexity, added weight and additional costs associated with using emission additives.

LPEGR functions by channelling exhaust gasses away after the DPF, cooling  them through a low-pressure EGR cooler and then recirculating them in advance of the turbo charger. LPEGR solution ideal for goods transport and campers where simplicity, reduced weight and low running costs are of paramount importance.

The FIAT Professional Ducato also benefits from the addition of a new 2.0-litre 115hp MultiJet II LPEGR engine to replace the current Euro 5 2.3-litre MultiJet 110hp. Offering up to 47.9mpg on the official combined cycle and CO2 emissions of just 157g/km, this new entry-level engine represents a significant downsizing compared to the engine it replaces but employs FIAT Professional’s latest technologies to offer improved efficiency and lower running costs while improving performance and refinement. Similarly, the top-of-the-range 3.0-litre 180hp has also been replaced by a new 180hp 2.3-litre MultiJet II Power LPEGR, resulting it a considerable improvement in fuel efficiency and emissions (46.3mpg on the official combined cycle and 160g/km), while the core 2.3-litre MultiJet 130hp and 150hp engines also adopt FIAT Professional’s exclusive LPEGR technology to ensure all FIAT Professional Ducato customers benefit from the brand’s latest technological advances.

Selective Catalyst Reduction (SCR) is currently offered on people carrier versions and uses AdBlue fluid to convert nitrogen oxides (NOx) to non-harmful gases. The AdBlue filler is placed close to diesel cap behind the same fuel flap to make refilling the 151-litre tank as simple and straightforward as possible. Consumption of emission-reducing additives (UREA) can vary according to how the vehicle is used and is indicated on the instrument panel.

The fourth-generation FIAT Professional Doblò builds on the class-leading characteristics that have helped it win International Van of the Year in 2006 and 2011, and achieve critical and commercial success in markets all over the world, by offering a full range of Euro 6 compliant engines –  including second-generation turbo diesel engines: a 1.3-litre MultiJet II 95hp and a 1.6-litre MultiJet II 105hp, both of which are available in new “EcoJet” versions to offer an improvement in fuel efficiency (12 percent and 15 percent respectively) and emissions levels thanks to the use of Start&Stop; low rolling-resistance tyres; low-viscosity oil; an ‘intelligent’ alternator; a variable-displacement oil pump and a new aerodynamic pack. All this makes it possible to achieve a fuel economy figure of up to 61.4mpg and CO2 emissions of just 120 g/km. Replacing the current 2.0-litre engine at the top of the range, a new 1.6-litre MultiJet II 120hp is now the flagship engine of the FIAT Professional Doblò line up, offering similar performance to the engine it replaces but capable of 55.4mpg (official combined cycle fuel economy figure) and CO2 emissions of just 135g/km.

With excellent dynamics, comfort and best-in-class load and volume capacities, the new FIAT Doblò Cargo is available in four body-styles; two roof height options and two wheelbase lengths. It is now sold in more than 80 countries, including North America where it retails as the RAM Promaster City.

The FIAT Professional Ducato Euro 6, with ground breaking LPEGR, is available to order now priced from £21,445* while the Doblò EU6 is priced from £13,545* (*prices exclude VAT and OTR charges).