wp booster error:
The path of the tdb_template_33543 template not found. Did you disable a tagDiv plugin? All-new Baleno hatchback model – on sale in the UK from 1 June 2016 - Car Daily
CLOSE
Welcome! Log into your account
Forgot your password?
Recover your password 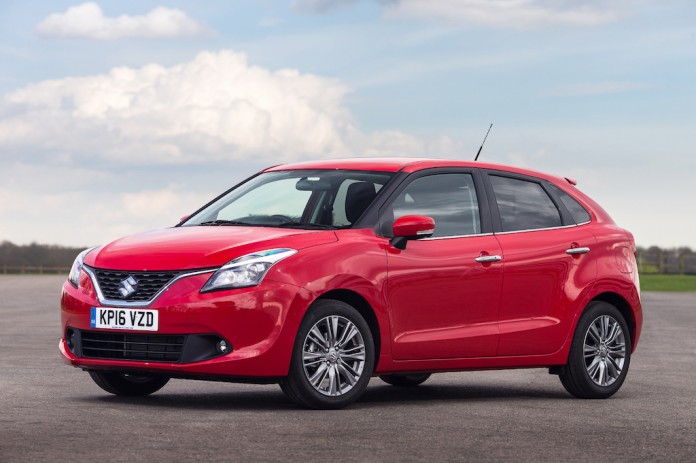 Suzuki is well known globally for its expertise in small cars and the new Baleno hatchback is its latest example. Since launching its first car in 1955, the Suzulight, Suzuki has produced a vast range of significant models each tailored to the needs of its time.

A larger car than Swift at 3.99 metres long, Baleno offers a more rational choice for buyers looking for extra interior space and larger boot capacity but may not be looking to move up in size to a Vitara or S-Cross. Baleno offers the best tandem distance in its class which is the measurement taken between the front and rear seats.

The Baleno is produced in India where Suzuki has a long established reputation and a major presence for more than 30 years. In 2015, 1.3 million cars were manufactured in Suzuki’s two Indian plants and the current share for the passenger vehicle market is a very impressive 48 per cent (April 2016).

Pricing for the Baleno range is as follows:

With the increasing popularity of Personal Contract Purchase to new car buyers, the new Baleno is available from launch with an attractive PCP offer. Taking the SZ-T model as an example, the offer comprises of a Nil customer deposit, £1,000 deposit contribution from Suzuki followed by 48 monthly payments of £199. Payments can also be reduced to just £159 over the same period if a deposit of £1,679 is made. As is normal with a PCP arrangement, a final payment is required to keep the car and the APR is 5.9 per cent.

After the debut of Boosterjet in the Vitara S in January 2016, the engine technology continues for the Baleno model with an all new 1.0-litre three cylinder version. Offering the same level of power and torque of a much larger capacity normally aspirated engine (1.8-litre), it delivers an effortless drive and genuine driving pleasure.

This unit has an output of 111PS and is also Direct Injection turbocharged (DITC). The new engine has very compact dimensions and offers 170Nm of torque available from 2,000rpm through to 3,5000rpm. The optional six speed automatic transmission equipped model offers 160Nm of torque and is available slightly earlier at just 1,500rpm through to 4,000rpm.

Boosterjet technology is developed by Suzuki and is characterised by improved fuel efficiency and driving pleasure made possible by using a small displacement, high torque turbocharger. Historically, power and torque delivery from a turbo-charged engine would not have been available until much higher engine speeds, offering less flexibility to the driver.

The 1.0-litre engine offers strong benefits in performance too with 0-62mph acceleration time of 11.4 seconds with manual transmission and 11.0 seconds for the optional automatic model.

Suzuki first introduced its Dualjet technlogy in 2014, initially in the 1.2-litre Swift (K12C) and then more recently in the 1.0-litre Celerio (K10C). This technology is now utilised for the four cylinder 1.2-litre Baleno and includes the addition of SHVS (Smart Hybrid Vehicle by Suzuki).

The SHVS mild hybrid system is a compact and lightweight system that incorporates an Integrated Starter Generator (known as ISG) which acts as both a generator and starter motor,  the ISG is belt driven and assists the engine during vehicle take off and acceleration and also generates electricity through regenerative braking.

The system also uses a compact lithium-ion battery placed under the front passenger seat to store energy and incorporates an idle stop function operated via the Integrated Start Generator. The SHVS system only uses its conventional engine starter motor when first started from cold, under all other conditions it uses the higher voltage ISG unit to allow smooth and quiet engine restarts.

In the new Baleno the SHVS system helps Suzuki reach a top class CO2 emissions figure of 94g/km plus achieve a fuel consumption figure of 70.6mpg on the EC combined cycle.

Under the ‘SUZUKI NEXT 100’ plan announced at the Frankfurt Motor Show in 2015, Suzuki has developed a new platform strategy for its future models and the Baleno is the first with this new generation platform to be introduced in Europe. The lightweight highly rigid body structure has been achieved by extensive use of 980MPa and 780MPa High Tensile steel sheeting.

The body frame has smooth curving lines with fewer joints that enable reductions in required reinforcements. This structure is not only lighter but disperses collision force energy more efficiently and improves overall crash safety. As a result of this development, Baleno is the most aerodynamically efficient Suzuki to date with a Cd figure of just 0.299.

The Baleno’s active safety equipment includes a Radar Brake Support (RBS) system on SZ5 models.  When travelling above approximately 3mph and the system detects a risk of collision with the vehicle in front, it warns the driver to apply the brakes. At higher speeds and if it senses the possibility of a collision, it warns the driver with a buzzer and also via a notification on the multi information display.

The RBS system fitted as standard on the SZ5 model monitors the road ahead by means of milliwave radar. The radar technology enables it to work even at high speeds, in darkness, and in rain or other bad weather. The system prevents or mitigates a collision by means of three functions which are Warning, Brake Asssist and Automatic Braking.

The audio system for both SZ-T and SZ5 models has a Smartphone Linkage Display Audio  (SLDA) with a large seven inch touch panel display that enables intuitive operation and can also be used when wearing gloves.  A three dimensional navigation map makes landmarks easy to distinguish and the system also allows the driver to use certain smartphone applications with MirrorLink and Apple CarPlay connection.

Apple CarPlay is the smarter and safer way to use iPhone in the Baleno. Apart from making  calls it also facilitates receiving directions for optimised traffic conditions, listening to music, accessing email, text messages and more.