wp booster error:
The path of the tdb_template_33543 template not found. Did you disable a tagDiv plugin? BMW model debuts and upgrades for summer 2016 - Car Daily
CLOSE
Welcome! Log into your account
Forgot your password?
Recover your password 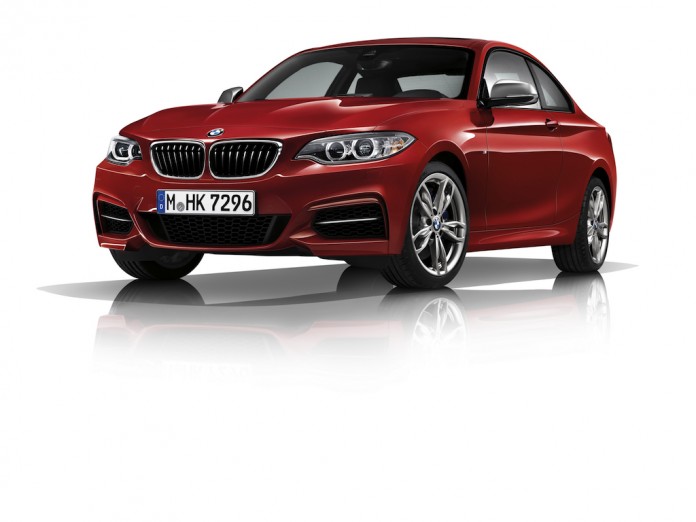 BMW is upgrading its product range for the 2017 model year with more efficient, stronger-performing new four- and six-cylinder engines for the BMW 1 and 2 Series, the introduction of a BMW iPerformance range of Plug-in-Hybrid models and improved connectivity systems for several model series.

Debut of a new six-cylinder 340hp engine: Introducing the BMW M140i and M240i.
The pinnacle of the 2017 BMW 1 Series three-and five-door hatch ranges and the BMW 2 series Coupé and Convertible line-ups are the M Performance models. They are powered by a new 3.0-litre straight-six engine also employing TwinPower Turbo technology to develop a power increase of 14hp and torque increase of 50Nm delivering a maximum of 340hp and 500Nm of torque, ensuring instantaneous acceleration across almost the entire rev range.

Acceleration in the BMW M140i is achieved 0.3 seconds quicker than the previous model, the M135i and now has a zero to 62mph time of 4.6 seconds (automatic). The BMW M240i Coupé performs the same sprint in the same time with a reduction of 0.2 seconds from the previous M235i Coupé. The M240i Convertible goes from rest to 62mph in just 4.7 seconds yet at the same time there is a reduction of up to seven per cent in fuel consumption. Official figures for the BMW M140i hatchbacks and M240i Coupé are 36.2mpg (manual) or 39.8mpg (Sports Automatic), with respective CO2 figures of 179g/km and 163g/km. The M240i Convertible is capable of 34.0mpg in manual guise and 38.2mpg as an automatic, while their respective CO2 emissions are 189g/km and 169g/km.

This impressive demonstration of high performance mixed with parsimony is the result of painstaking attention to detail with every aspect of the powertrain. The compact size of the Twin Scroll turbocharger makes it extremely efficient, and it is linked to an indirect intercooler. The new M Performance models also feature electric wastegate control, a close-coupled catalytic converter, an on-demand cooling pump and map-controlled oil pump, electronic power steering, Auto Stop Start and Brake Energy Regeneration.

The six-speed manual transmission includes an engagement control function which blips the throttle on downshifts for increased smoothness and sportiness. The optional eight-speed Sport Automatic gearbox now has a wider spread of ratios to enhance efficiency and is capable of multiple downshifts for greater responsiveness. It incorporates Launch Control with a predictive shift strategy, all linked to the navigation system so that the car can extract every last fraction of performance when accelerating from standstill. A rev-linked vibration damper enhances smoothness and improves the rich sounds the driver hears, further aided by an acoustic shield beneath the bonnet.

BMW 1 Series and BMW 2 Series now benefit from more efficient engines.
With the arrival of the 2017 model year BMW 1 Series Sports Hatch and 2 Series Coupé and Convertible, BMW completes the introduction of the highly efficient new Baukasten 2.0-litre four-cylinder engine to all variants in both ranges.

The 2.0-litre engines employ BMW TwinPower Turbo technology incorporating a Twin Scroll turbocharger, direct fuel injection and VALVETRONIC and Double VANOS valve control. They are available in 20i, 25i and 30i guises, delivering between 6hp and 7hp more than the units they supersede at 184hp, 224hp and 252hp respectively. The introduction of Baukasten engines sees the 20i upgraded to twin exhaust tailpipes.

Acceleration times with the new engines are trimmed and fuel consumption and tailpipe emissions also fall in many models, in some cases by up to 17g/km, with advantages for Benefit-in-Kind taxation and Vehicle Excise Duty.

An eight-speed Sport Automatic transmission becomes standard for the 125i, while on the BMW 2 Series Coupé and Convertible a 230i takes the place of the former 228i.

New BMW iPerformance range launched including new 7 Series PHEV models with up to 29 miles all-electric range.
At the 2016 Geneva Motor Show BMW announced a new iPerformance range of electrified fuel-saving, emissions-reducing models. They will take technologies developed for BMW i and introduce them into mainstream models, in much the same way as BMW’s M Performance employ the design and engineering expertise of BMW M.

Three of these plug-in hybrid (PHEV) models – the BMW 225xe Active Tourer, BMW 330e saloon and BMW X5 xDrive40e – are already on sale. They are now to be joined by the BMW 740e and 740Le xDrive saloons, all to be sold under the new iPerformance banner.

Externally, iPerformance cars are identifiable only by eDrive badges on the C-pillars, the charging point flap on the nearside front wing and, in some cases, i badges on the front wings. Customers can, however, specify iPerformance exterior styling at no additional cost. This consists of blue slats on the BMW kidney grille and blue alloy wheel hubs. Internally, iPerformance models have eDrive menus in the black panel display and, in most cases, eDrive designation on the door sills.

All iPerformance models benefit from the advanced electronic motors, high-performance lithium-ion batteries and intelligent energy management systems developed by BMW for the all-electric i3 and plug-in hybrid i8.

In the BMW 740e and BMW 740Le xDrive the combination of a 2.0-litre TwinPower Turbo petrol engine and a synchronised electric motor produces a combined 326hp, with spontaneous delivery and exemplary efficiency. They are capable of covering up to 29 miles on electric power alone – sufficient for the majority of urban commutes – while CO2 emissions are between 49 and 56g/km and fuel consumption is from 134.5 to 113mpg.

Superior connectivity for additional six model ranges.
Six additional model ranges now benefit from the latest iDrive interface and enhanced connectivity services. Originally introduced on the BMW 7 Series and added to the BMW 6 Series, X3 and X5 in March/April 2016, it will now be available on the BMW 1 Series, 2 Series, 3 Series, 4 Series, X5 and X6 ranges. Incorporated into the BMW Professional media system, the latest iDrive interface and enhanced connectivity provides a simpler menu navigation requiring fewer clicks to move between key sections such as map view, messages, entertainment and media and an increase in RAM to improve performance. This new system also allows the wireless integration of selected third party applications from a compatible mobile device.

In addition to the already standard Bluetooth connectivity this can be further enhanced by opting for the new Enhanced Bluetooth which alongside the upgraded BMW Professional Navigation system now includes Wireless Charging, WiFi Hotspot preparation and an additional USB socket. The new Enhanced Bluetooth with Wireless Charging is offered as standard on all BMW 6 Series and 7 Series models as well as the M3, M4, X5M and X6M.

Accessing a library of over 30 million tracks available to stream at any time as part of BMW Online Entertainment is now even easier thanks to the new Connected Music feature. This introduces the additional option, when listening to the radio, of recognising the track, artist or album. The listener can then search for and stream other music by that artist or music of the same genre.

New equipment and personalisation options.
BMW pioneered the idea of the personalised car, and now takes it a step further with the 2017 model year versions.

Black Dakota leather upholstery with blue contrast stitching becomes an option on all BMW 3 and 4 Series M Sport models, and Venetian Beige Dakota leather upholstery contrasting with the black interior carpets for an elegant appearance is offered on the BMW 3 and 4 Series cars. For the BMW X5 and X6, the tilting monitors with the optional DVD and MP3 rear seat entertainment system have been increased in size from 9.2 to 10.2 inches, with higher resolution, while the DVD player is now compatible with BluRay and features an HDMI input to connect external devices.

An M Sport version of the BMW 225xe Active Tourer Plug-in-Hybrid has been introduced at £34,405 OTR before Government Plug-in Car grant. There are revised colour options for several models.

A BMW Individual leather steering wheel becomes standard on all BMW 3 and 4 Series Luxury models; there is a new Exclusive trim level available for the 7 Series models, while Executive Lounge seating and Executive Lounge package is available on long-wheelbase versions. In addition to this, the 7 Series Executive package has been renamed the Premium package which now includes Climate Comfort laminated windows and windscreen.