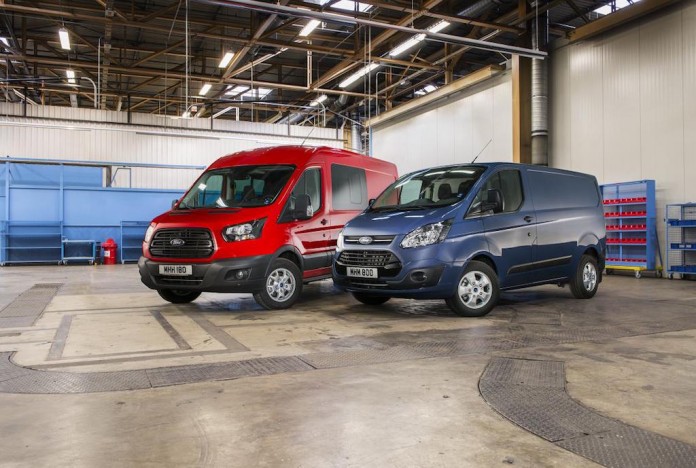 Ford’s new Transit and Transit Custom commercial vehicles powered by the all-new, state-of-the-art 2.0-litre Ford EcoBlue diesel engine make their global debut at The Commercial Vehicle Show in Birmingham, U.K., and will offer improved cost of ownership and performance for customers from mid-2016.

New from the ground up, the next-generation Ford EcoBlue engine enhances fuel efficiency by up to 13 per cent compared with the outgoing 2.2-litre TDCi engine, with CO2 emissions from 157 g/km,* and delivers significant improvements in low-rpm torque for enhanced driveability. The new engine – available to order now – also will deliver up to 2-year/37,000 miles variable service intervals for Transit and Transit Custom operators.

The all-new downsized 2.0-litre Ford EcoBlue diesel engine has been engineered to meet Ford’s rigorous commercial vehicle durability standards, powering Transit vehicles through the equivalent of 3.4 million miles of punishing durability testing, including 250,000 miles of testing at the hands of real-world Transit customers.

“The challenge was to take our best-selling Transit and make it cheaper to operate, improve performance, cleaner in terms of emissions, quieter in the cabin, safer and even more durable,” said Pete Reyes, Ford of Europe’s head of commercial vehicles. “That’s exactly what we did with the new Transit and Transit Custom with the all-new Ford EcoBlue engine.”

In addition to the all-new engine line-up, Transit and Transit Custom vehicles also are available to order now with advanced driver assistance technologies including Side Wind Stabilisation and Pre-Collision Assist with Pedestrian Detection. From late 2016, customers also will be able to specify a sixspeed automatic transmission in place of a manual gearbox, and a new rear air suspension option on Transit Custom Kombi models.

The two-tonne Transit and one-tonne Transit Custom vehicles are core models within Ford’s renewed Transit range, which also includes the smaller all-new Transit Connect and Transit Courier vans. The success of this expanded line-up has helped maintain Ford’s top position for CV sales in the UK, which it has held for the past 50 years. Ford also became Europe’s No.1 selling commercial vehicle brand in 2015 – for the first time in 19 years – with total sales of 280,000, a year-over-year increase of 23 per cent.

Growth has continued in the first quarter of 2016, with combined Transit and Transit Custom sales in Europe of 50,100 vehicles, a rise of 15 per cent over the previous year.

The engine has been developed with the latest turbocharging, fuel injection, combustion system, structural design and low-friction technologies to deliver significant improvements in fuel efficiency, performance and operating refinement, while delivering the outstanding durability and low cost-of-ownership demanded for a Transit power unit.

For the Transit and Transit Custom models, the 2.0-litre Ford EcoBlue engine is offered in 105PS, 130PS and 170PS power ratings, each of which offers increased power and torque compared to the outgoing 2.2-litre engine. Improved low-end pulling power – with 20 per cent more torque at 1,250rpm – delivers more flexible and responsive performance in everyday driving.

Transit Custom vehicles fitted with optional Auto-Start-Stop deliver CO2 emissions from 157g/km with average fuel consumption from 46.3mpg – 13 per cent down from the equivalent outgoing model.

Scheduled maintenance costs are also reduced, with the extended variable service intervals of up to two years/37,000 miles offering up to an additional 6,000 miles between services on both Transit and Transit Custom models.

The new engine also improves driver comfort during long working days through major reductions in engine noise, with passenger-car levels of refinement. The class-leading driving dynamics of the Transit and Transit Custom have been enhanced through revised steering efforts for better feedback, and a new rear damper design for improved comfort and control.

In parallel with the all-new powertrain, new Transit and Transit Custom models also benefit from advanced new driver assistance and vehicle technologies to enhance confidence and comfort behind the wheel.

Using camera and radar technology shared with Ford’s latest passenger cars like the Mondeo and S-MAX, both Transit and Transit Custom customers can specify:

Inside the cabin, Transit customers can now specify Ford’s SYNC 2 voice-activated connectivity system with a new high-resolution 6-inch colour touch screen, featuring advanced voice control of audio, navigation and mobile phones. On Transit Custom vehicles, a new 4inch colour display is standard on vehicles equipped with the SYNC connectivity system, in place of the previous 3.5-inch screen. From the outside, new Transit and Transit Custom models fitted with the all-new Ford 2.0-litre EcoBlue engine are identified by a new chrome finish strip in the lower front grille.

For improved comfort and convenience in urban driving, customers of Transit front-wheel drive derivatives and Transit Custom models will be able to specify a six-speed SelectShift automatic transmission from late 2016. The transmission offers smooth, responsive and efficient performance in partnership with the Ford EcoBlue diesel, including Auto-Start-Stop where fitted, and also provides the option of manual shifting using buttons mounted on the gear lever.