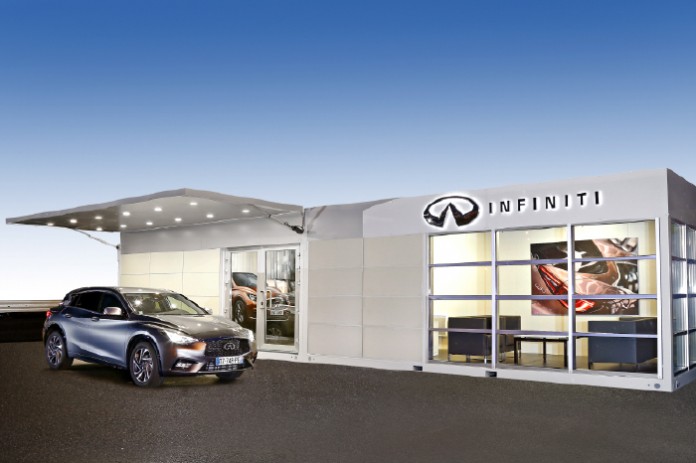 Infiniti has recently signed an agreement with the John Banks Group to open up a new Infiniti Centre in Cambridge, covering the county of Cambridgeshire and to help strengthen representation across East Anglia.

Infiniti Centre Cambridge is expected to be operational from mid-April and is expected to have their fully operational facility open by the end of the year. Located in central Cambridge, just off the Newmarket Road (Swann’s Road), the centre will utilise one of the new short-term Infiniti designed showrooms until the full redevelopment work, to meet with the Infiniti Retail Environment Design Initiative (IREDI) standards, has been completed.

Carl Bayliss, Regional Director for the UK commented, “I am very pleased to welcome Infiniti Centre Cambridge and the John Banks Group to our growing brand. With the recent introduction of the British manufactured Q30 & QX30, the brand is accelerating its growth in the UK. Infiniti Centre Cambridge joins us at a pivotal point in our network expansion plan, and we have an exciting future ahead of us.”

Melanie Banks-Browne, Chief Executive of John Banks Group, said: “Our own expansion plans are currently taking place and to be able to have a premium brand such as Infiniti within our portfolio means we will be able to offer our customers an even more extensive range of products, from many different brands, to suit almost any requirement they may have.”

The John Banks Group is currently expanding with new premises at Swann’s Road and a new servicing and repair centre soon to open in Mercers Row, Cambridge, completing five sites in the Cambridge territory.

John Banks Group, has an established presence in the region and have been trading for over 42 years in the motor industry. By continuing to expand demonstrates they are a growing strength in the market.

Later in 2016 the Infiniti QX30 Active Crossover will arrive, providing a higher stance than the Q30 with more of an SUV like appearance. This will be followed by the two door sports coupe Q60, which recently had its first European public exposure at this year’s Geneva motor show.

Infiniti is currently experiencing record breaking sales growth not only in the UK but across the world. Last year in the UK sales increased by over 60% year on year and are already showing an increase in 2016 of 67%.