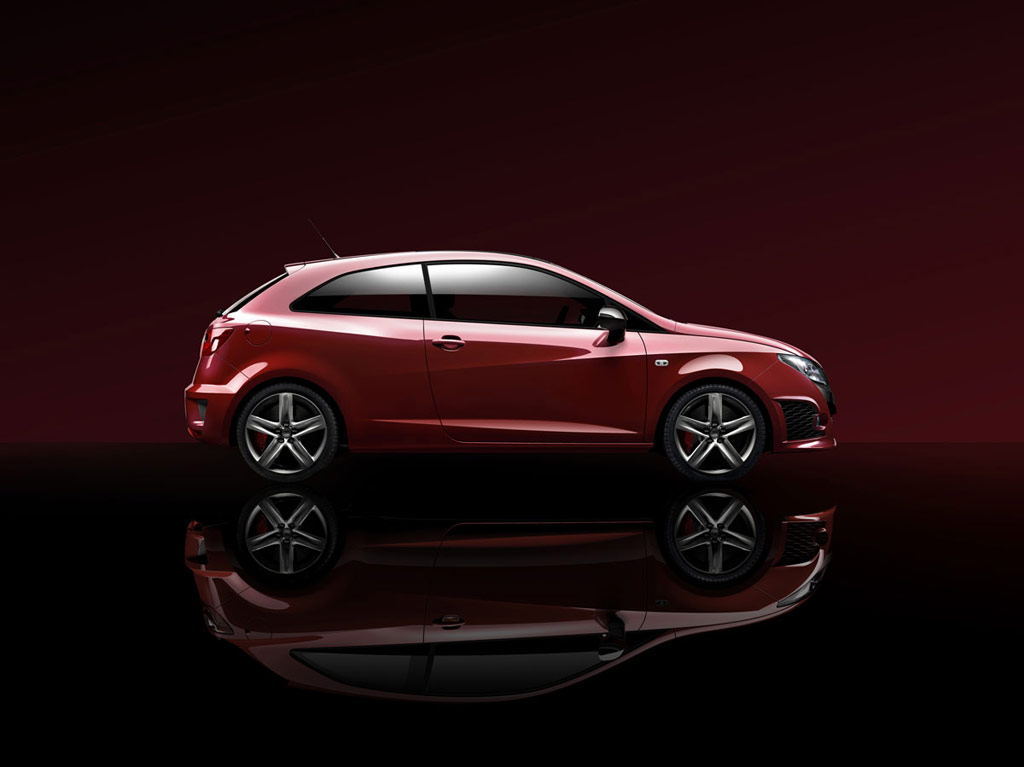 SEAT is wowing the crowds at this week’s Barcelona International Motor Show with the debut of a road-ready version of its stunning Ibiza Bocanegra. Staying remarkably true to the headline-grabbing Bocanegra concept car unveiled at the Geneva Motor Show a little over 12 months ago, the production version is today making its world debut at SEAT’s ‘home’ show. Boasting several unique, and dramatic, black styling elements at its nose – hence the Bocanegra name which translates as ‘black mouth’ in Spanish – the new iteration of today’s Ibiza is set to become one of the hottest superminis around.

Unveiled on the SEAT stand at today’s first Press day the Ibiza Bocanegra’s styling is also a tribute to the Spaniards’ original Bocanegra, the 1200 Sport, which debuted in its home country back in 1975.

The ‘70s car, a milestone in the Brand’s history as the first model to be wholly developed at the SEAT Technical Centre in Martorell, quickly went on to become a firm favourite in its home market and notched up sales of more than 11,000 in just three years. Scroll forward to today, and design features unique to the 2009 car include completely black double headlights, a central grille with honeycomb mesh and black surround including innovative air vents at the base.

The bumper combines black with the body colour, while a broad grille beneath that takes care of cooling the engine. The fog lights are built into the bumper, which is bigger at the bottom and over the wheel arches, and its distinctly muscular volume contributes toward the car’s unmistakably sporty appearance. Other elements that further add to the Ibiza Bocanegra’s image are black door mirror housings, a dark tinted sunroof and attractive 17-inch ‘Sira’ alloys. At the back, the Bocanegra features honeycomb mesh on the side grids, an impressive spoiler, chunky wheel arches and a tinted rear window. And if anyone were in any doubt that this really is a special SEAT, there’s a prominent “Bocanegra” badge centred on the rear hatch of this most exclusive Ibiza. Inside, the design delights continue with a bespoke interior that underlines the car’s sporting style.

The sports seats are upholstered with special fabric made up of rhomboids stitched together in red, while the upper part of the seats sport the logo that identifies this version – a capital ‘B’ also stitched in red. Other eye-catching features inside include the three-spoke steering wheel, flattened at its base, which displays a capital ‘B’ in aluminium in the middle of the vertical spoke. Gloss black trim, aluminium-clad pedals and, of course, the Bocanegra logo on the instrument panel distinguish this car from the forthcoming FR and Cupra versions, too.

In its home market the new Bocanegra will be equipped with the twin charged 1.4 TSI engine, either in 150 PS or 180 PS guise. This new generation engine guarantees both brilliant performance and exceptional economy.

Welcoming the car’s dramatic show debut today Head of SEAT UK, Peter Wyhinny, said: ‘The surprise unveiling of Luc Donckerwolke’s brilliant design concept at Geneva last year caused a real buzz around the show, and I’m sure the appearance of this remarkable production version will do the same in Barcelona.