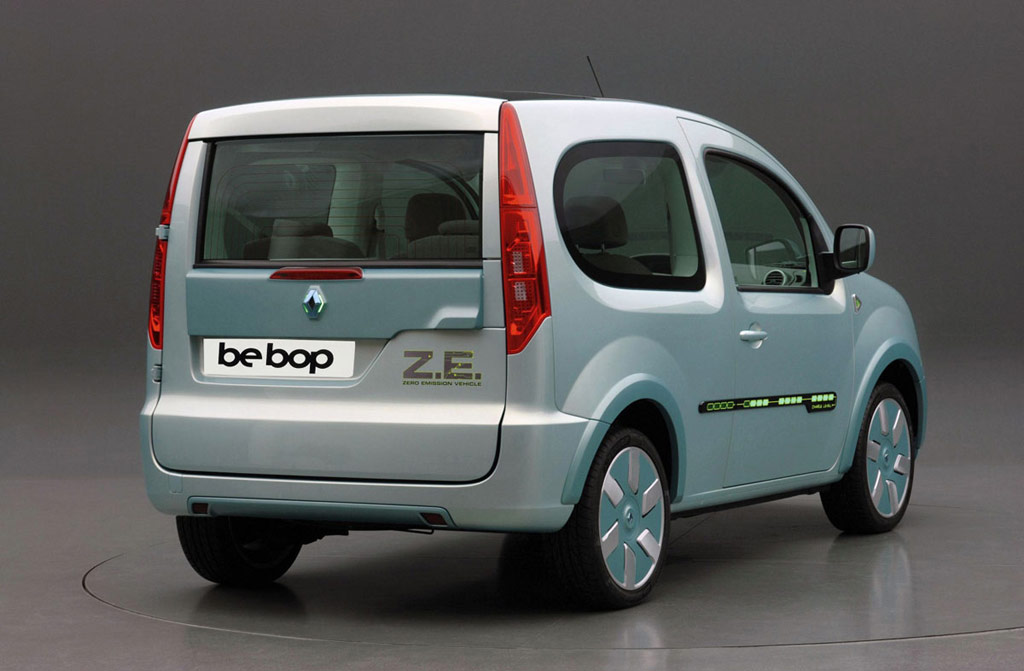 Kangoo be bop Z.E. is derived from the production version of Kangoo be bop and is instantly recognisable by its ‘Energy Blue’ body colour, while the Renault logos on the grille and wheels are picked out in satin-finish blue-hued chrome. Inside, the satin-finish chrome and metallic acid green trim ensure a unique ambience, further expressed by the specific grey velour upholstery and embroidered ‘printed circuit’ motifs.

Like the Z.E. Concept concept car which was unveiled at the 2008 Paris Motor Show, Kangoo be bop Z.E. is equipped with low-energy LED (light-emitting diode) front and rear lighting to optimise energy use. Meanwhile, the car’s aerodynamics have been significantly reworked to reduce energy consumption. Kangoo be bop Z.E. sits on 18-inch full disc wheels, and its ground clearance has been lowered by 20mm compared with that of the production Kangoo be bop.

Linear displays on the outside of Kangoo be bop Z.E.’s doors show how much charge is left in the battery by simply activating the remote central locking control. Inside, a gauge to the left of the instrument panel provides the driver with a permanent indication of how much battery charge remains.

Kangoo be bop Z.E. is an all-electric zero emission vehicle. It is powered by a 60hp (44kw) electric motor which revs to 12,000rpm and boasts greater efficiency (90 per cent) than an internal combustion engine.

Kangoo be bop Z.E.’s electric motor is coupled to a reducer which replaces the gearbox traditionally mated to internal combustion engines. This reducer has a single, constant output ratio. Electrical energy is transmitted to the motor by a power electronics unit which incorporates the controller that delivers the required amount of energy to the rotor.

Kangoo be bop Z.E. is equipped with compact, innovative lithium-ion batteries produced by AESC (Automotive Electric Supply Corporation), a Nissan-NEC joint venture which was founded in April 2007. The performance of these batteries compared with former-generation nickel metal hydride batteries is superior in every domain, including performance, reliability, safety and efficiency. Lithium-ion batteries do not suffer from the so-called memory effect which results from incomplete charge cycles, ultimately leading to a fall in capacity. The AESC battery is expected to deliver between 80 and 100 per cent of its original capacity for six years.

The compact dimensions of lithium-ion batteries enable the vehicle’s configuration to be optimised and a wide range of applications to be envisaged. In the case of Kangoo be bop Z.E., the battery is located underneath the dashboard. It consequently doesn’t encroach on either cabin space or boot capacity, making it possible to keep the same arrangement of four individual seats as that seen on the standard Kangoo be bop.

The battery comprises 48 modules, each of which incorporates four elementary cells. It is inside these cells that the electro-chemical reactions take place, enabling electrical current to be produced or energy to be stored.

A year and a half ahead of the launch of Renault’s production electric vehicles, the 15kWh battery of the Kangoo be bop Z.E. prototype delivers a range of approximately 100km. At launch, Renault electric vehicles will profit from an evolution to their battery technology which will take their real-world range to 160km.

Last but not least, lithium-ion batteries are recyclable and the Renault-Nissan Alliance is actively working on establishing recycling processes and infrastructures adapted to automotive batteries.

Kangoo be bop Z.E. is charged via a MarechalTM-type socket located behind a flap at the front of the vehicle alongside the right-hand headlamp. The other end of the cable is fitted with a normal plug which connects to the mains supply.

Approximately twenty car manufacturers – including Renault – and energy groups have been working with the German group RWE to develop a universal standard plug. Shown at April’s Hanover Messe technology fair, it will be used to charge the batteries of future Renault electric vehicles. The three phase plug can be used with a 400V supply enabling a complete charge in approximately 20 minutes. This multi-partner agreement marks a significant step forward in the development of mass market electric vehicles. Kangoo be bop Z.E. is also equipped with a brake energy recovery system which enables it to be charged while on the move.

The Renault-Nissan Alliance aims to be the leader in mass-market zero emission vehicles. The Alliance is actively forging innovative associations with governments, city authorities and energy companies with a view to promoting the widespread use of electric vehicles across the world. Twenty-four such partnerships have already been sealed to date.

Renault and Nissan were among the first manufacturers to commit to achieving significant reductions in carbon dioxide emissions in recent years. Renault’s strategy which was unveiled in January 2008 specifies the release of mass market electric vehicles by 2011.

The Renault-Nissan Alliance is planning to have a comprehensive range of high-quality, reliable, innovative and affordable electric vehicles. The first all-electric Nissan vehicle is due to be launched in the United States and Japan in 2010, and Nissan is set to market its electric vehicles worldwide from 2012. Renault will start marketing all-electric models in 2011, beginning with a family saloon in Israel, and a utility version of New Kangoo in Europe. Two new, highly innovative vehicles are then scheduled for release in 2012.

Renault’s zero-emission, silent-running electric vehicles will incontestably break new ground, while at the same being affordable for the majority of road users.