wp booster error:
The path of the tdb_template_33543 template not found. Did you disable a tagDiv plugin? Revealed: The Safest Cars in Britain - Car Daily
CLOSE
Welcome! Log into your account
Forgot your password?
Recover your password 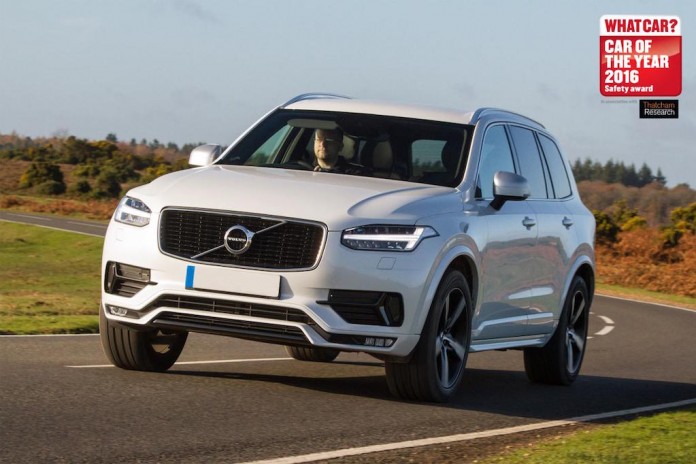 The Volvo XC90 is the safest new car on sale in Britain, and the winner of the 2016 What Car? Car of the Year Safety Award. The Honda Jazz and Toyota Avensis were commended as runners up from among a strong 17 car shortlist for the Award, the results of which were announced on the evening of 13th January 2016.

The 2016 Safety Award was judged in conjunction with leading independent automotive research centre and vehicle safety organisation, Thatcham Research, using a set of criteria that combined hard facts with expert opinion. All of the cars considered for the Award have earned the coveted Euro NCAP five star crash test rating and also have Autonomous Emergency Braking (AEB) standard on at least one model derivative – a point that Thatcham Research cites as vital to ensure the highest safety standards.

“It is a great pleasure to be able to formally recognise Volvo, as well as Honda and Toyota, for the excellent safety performance of their vehicles,” commented Thatcham Research Chief Executive, Peter Shaw. “As the clear winner of the 2016 What Car? Car of the Year Safety Award, the Volvo XC90 has an outstanding complement of active and passive safety features that affords drivers, passengers and other road users the highest levels of protection currently available.”

Shaw continued: “Like all of the 17 cars in the final reckoning, the Volvo XC90, Honda Jazz and Toyota Avensis gained top ratings in crash testing, but just as importantly they are fitted as standard with Autonomous Emergency Braking (AEB), a technology that Thatcham Research believes is key to reducing crashes and saving lives on British roads.”

“Cars are safer today at every price point than they have ever been, but there is still much more that consumers and the automotive industry can do to further improve road safety,” said Peter Shaw, Chief Executive of Thatcham Research. “We believe that advanced safety features like Autonomous Emergency Braking (AEB) should be standard on every new car sold, rather than on just 17% as is currently the case.”

Shaw continued: “When you have the chance for everyone to gain from the inclusion of a life-saving technology that has been shown in studies to reduce the likelihood of a front-to-rear crash by almost 40%1, you simply cannot afford to miss the opportunity.”

In conjunction with its call for AEB to be standard on all new cars, the research organisation believes that further action is needed in a number of related areas to ensure that Britain sees the maximum benefit from safety technologies available now, but not fully embraced:

“People choosing only AEB-equipped new cars now will not only make our roads safer, it will also send a clear message to car makers about the importance of – and demand for – this technology,” commented Peter Shaw. “We also believe that industry-wide adoption of simple, generic names for individual safety features in place of the many different descriptions currently used by car makers would significantly improve consumer awareness and understanding of live-saving technologies.”

Shaw continued: “Car makers are pioneering new technologies and have worked hard to make a widening range of safety features available on new vehicles and give consumers a base level of knowledge about the technologies. But there is much more that can be done – this is very much a case of vehicle manufacturers helping people to help themselves, by ensuring that the cars they are buying are as safe as they possibly can be.”

The What Car? Car of the Year Safety Award Winners in Detail

The winner and runners-up in the 2016 What Car? Car of the Year Safety Award should be at the top of the list for anyone making a new car choice, as Matthew Avery, Director of Research at Thatcham Research and one of the Award judges, explained:

“The Volvo XC90 proved to be head and shoulders above the rest of the cars tested, its high levels of active and passive safety make it our highest scoring car ever,” he said. “Volvo has really raised the bar, with features including pedestrian and cyclist recognition, auto braking, run-off road protection and rear collision alert: it’s a well-deserved winner.”

The Toyota Avensis was praised by Avery for offering a very high level of protection at a reasonable price, while Toyota as a manufacturer was singled out for its commitment to safety: “Here is a car maker that has gone beyond what is currently tested by safety bodies, providing advanced technologies like Lane Departure Warning as well as low and high speed AEB, that are available across the majority of the range.” he said.

The Honda Jazz was commended for having a high level of safety at an attractive price: “For under £14k, the Honda Jazz has standard fit AEB across the full range, making it the safest supermini in Britain,” commented Avery. “Other safety technologies like Lane Departure Warning and traffic sign recognition are also available and its one touch speed limiting feature is unique in the supermini class.”

What Car? Editorial Director, Jim Holder, commented: “Safety is very important to our magazine readers and a significant search term on whatcar.com. That’s why we teamed up with safety expert Thatcham Research to name the safest new car on sale in Britain, basing our results on the latest, tougher Euro NCAP test ratings and further analysis by an expert panel of judges.”