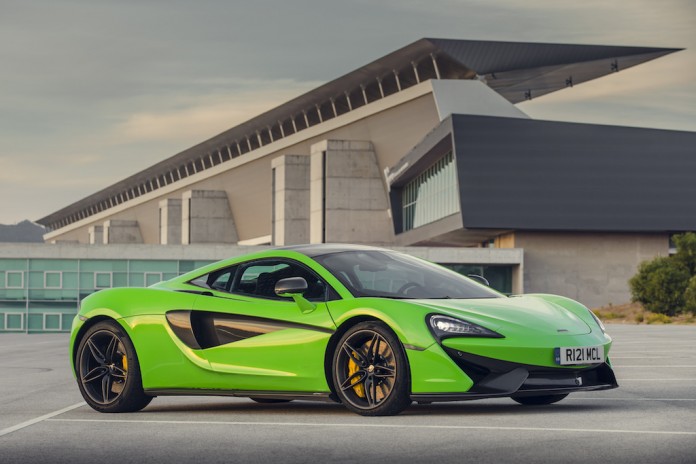 McLaren will showcase the Sports Series and Super Series at the 94th edition of the Brussels Motor Show, 12-24 January 2016. McLaren Brussels will present examples of the 570S Coupé and the now sold-out 675LT Coupé. Both models were unveiled last year – in New York and Geneva respectively – and this will be the first time the two models have been displayed together at a European motor show.

The 570S Coupé is the first – and most powerful – model to be launched in the Sports Series, establishing the third and final model tier for McLaren. The all-new, mid-engine sports car brings McLaren race-derived technologies to the segment for the first time, while offering a greater focus on everyday usability and refinement. The 570S Coupé features a highly efficient 3.8-litre twin turbo V8 engine which generates 570PS (562bhp), accelerating from zero to 100 km/h (62mph) in just 3.2 seconds and on to a top speed of 328 km/h (204mph). Prices for the McLaren Sports Series start from €162,750 in Belgium.

The 675LT Coupé is the most powerful, fastest and most track-focused, yet road legal, model in the McLaren Super Series, and resurrects one of the most revered names in modern-day GT racing – the ‘Longtail’ Strictly limited to only 500 examples worldwide, it is now sold out. It was developed with a clear focus: to deliver maximum performance, engagement and excitement. To achieve this, weight has been reduced by 100kg through the increased usage of carbon fibre – the signature material of McLaren – and by lighter components throughout, including newly developed suspension geometry derived from the McLaren P1™, resulting in an increased track of 20mm. Power of the newly-developed M838TL 3.8-litre twin-turbocharged V8 engine is 675PS (666bhp) at 7,100rpm, with a torque figure of 700Nm (516 lb ft) at 5,500-6,500rpm.

Stéphane Sertang, CEO of Ginion Group, explains: ‘McLaren has a rich heritage in Belgium, and we are delighted to be representing McLaren at the Brussels Motor Show, displaying the 675LT Coupé and 570S Coupé together. The 675LT has quickly established itself as one of them most exciting and exclusive cars on the road, and we are really proud to showcase the game changer in the sports car segment, the McLaren 570S, which is now available in Belgium and Luxembourg.’

Jon Pollock, Regional Director for Europe, McLaren Automotive added: ‘2015 proved to be a defining year for McLaren, with no less than five new models launched including the 675LT Coupé and 570S Coupé, and 2016 is already shaping up as another busy year. Demand for the new product has been extremely strong, with another record year for sales as the brand continues to grow, and sales in Europe were strong. Already, we have a six month order bank for the Sports Series as first cars are now starting to be delivered throughout the region, and both the Coupé and Spider derivatives of the 675LT have sold out. We are looking forward to another busy year, engaging with customers and fans across the region, starting with the Brussels Motor Show.’