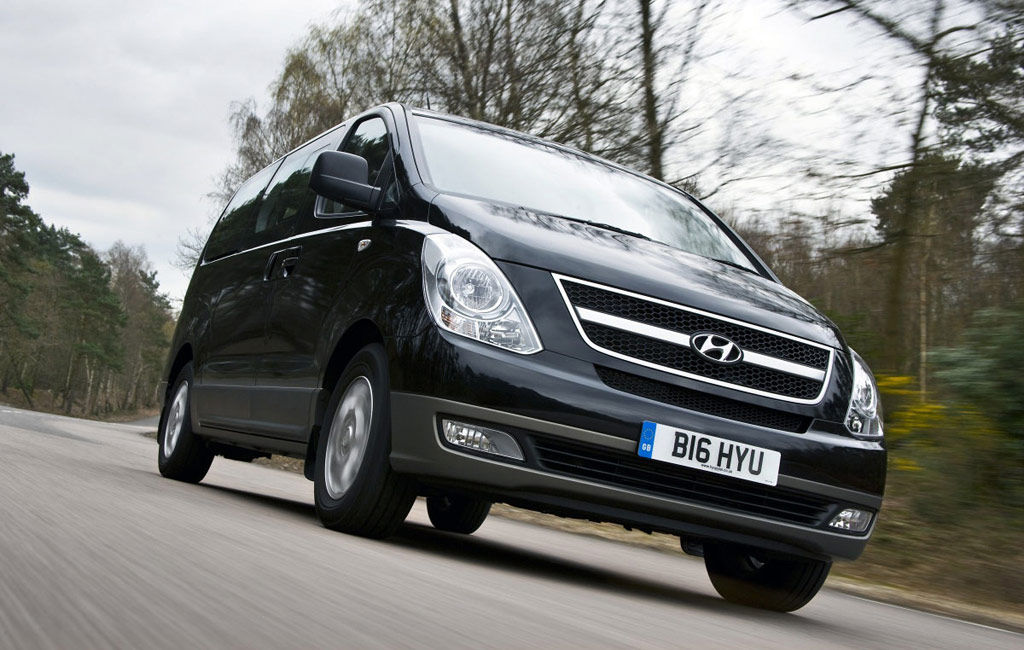 Big families, small businesses and anyone with lots of friends can rejoice – at last there is a classy way to carry eight people and luggage in a car that costs less than £20,000.

Unlike most MPVs, which only have room for seven people, the i800 can comfortably accommodate eight. In addition the big Hyundai will still have room for all their luggage. In fact the i800 has 851 litres of space in the boot even when loaded with passengers; that’s twice as much as some estate cars!

The Hyundai i800 features a pair seats in front and two benches behind, each accommodating three adults in comfort with uncompromised head and legroom.

Both rear benches feature a 60:40 split-fold and recline while the centre row also slides forwards or backwards to tailor space as required. All of the rear seats are accessed by pair of sliding doors, making access easy wherever the i800 is parked.

Once inside, the ambience is far more car-like than other ‘minibus’ style rivals, with two-tone interior trim, privacy glass, a six-speaker audio system and ducted air conditioning throughout. Individually-controllable overhead vents in the rear make sure all of the occupants can keep their cool.

It’s not just the luxury inside that makes the i800 comfortable. Rather than using the same chassis as a commercial vehicle, the stylish new people carrier has a purpose-made coil sprung rear suspension system with five locating links to ensure optimum ride quality and manoeuvrability. Alloy wheels are also standard.

Bringing power to the people carrier is a new 2.5-litre four-cylinder CRDi diesel engine, which is intercooled and features a variable-geometry turbo. Peak power output is 170PS with a massive 392Nm of torque; enough to ensure that the i800 never feels sluggish even with a full load. Balancer shafts also mean that the engine remains smooth and refined at all times.

Despite the impressive performance, this engine is also capable of remarkable economy with a combined figure of 33.2 mpg. Thanks to a 75 litre tank, it means the i800 driver could go more than 560 miles between fill ups.

When carrying passengers, safety will always be a prime concern. With this in mind the i800’s sure-footed rear-wheel-drive handling is backed up by ESP and traction control systems plus dual airbags. In addition, all occupants have three-point seatbelts on offer.

While some drivers might initially feel intimidated by the i800’s size – it measures 5,125 mm long, 1,920 wide and 1,925 tall – it is actually surprisingly easy to thread into tight spots thanks to a turning circle of just 5.61m. In addition, electronic reversing sensors are standard.

The i800 will go on sale on 20th June costing £19,495. It will be joined later in the year by a lower power, lower specification version at an even more competitive price.

As with all Hyundai cars, the i800 will be covered by a five year, manufacturer backed, unlimited mileage warranty.

Tony Whitehorn, managing director of Hyundai UK said: “anyone wanting to carry eight people in car-like comfort currently has to take two cars – or spend a lot more than £20,000. We think the i800 will prove massively popular with families and businesses who need to move people in style.”