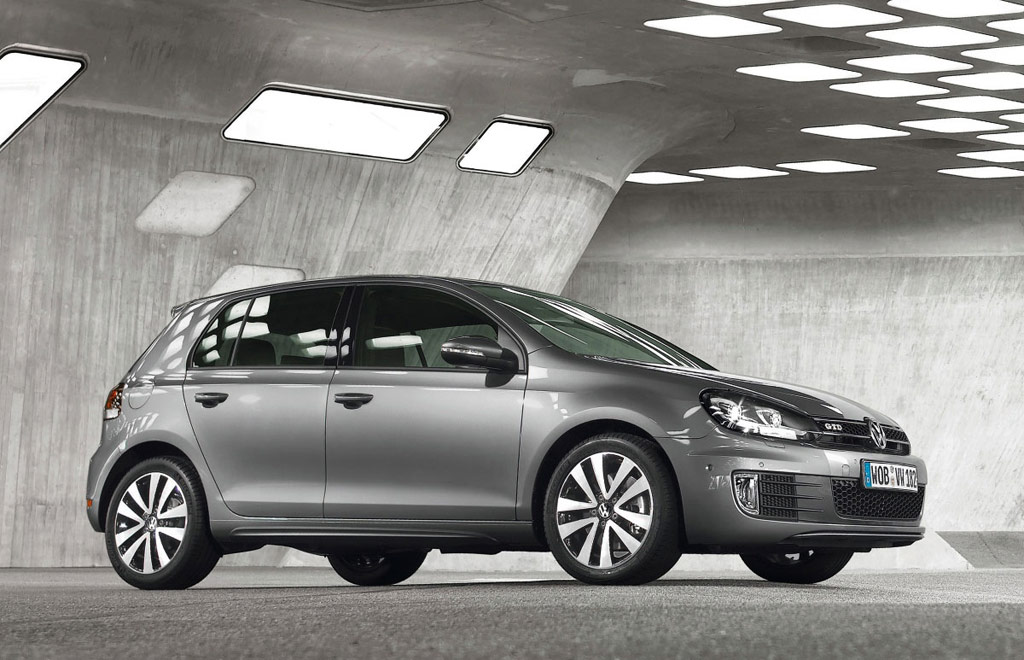 As the new GTI hits the road for the first time its sister car has been unveiled at the Leipzig Motor Show: the new diesel-powered Golf GTD. The ability to accelerate to 62 mph in 8.1 seconds and a top speed of 136 mph are combined with average fuel consumption of 53.3 mpg and a range in excess of 650 miles on a single tank of fuel to create a hot hatch of the moment.

Lessons learned through the creation of the sixth generation GTI are applied to the new GTD. Sharp responses and an agile chassis complement the car’s substantial torque which is available from as low as 1,750 rpm.

Powering the new GTD is a refined 2.0-litre (1,968 cc) common rail TDI engine, producing 170 PS and 258 lbs ft of torque. Driving through a six-speed manual or automatic DSG gearbox, this translates to effortless performance with CO2 emissions of just 139 g/km.

Maintaining the sharp responses expected of the GTD is suspension lowered by 15 mm when compared to the standard Golf. In addition, Volkswagen’s innovative Adaptive Chassis Control system (ACC), featuring pneumatically controlled damper units, can be specified on the GTD. This allows the driver to select from normal, comfort or sport modes to define the desired suspension, steering and accelerator response settings for any particular journey.

The Golf GTD’s appearance will differ significantly from that of the standard Golf’s. It gains the GTI’s honeycomb grille, badge-style and front-end design, though with the addition of chrome rather than red highlights. At the back, full body-coloured bumpers make the GTD appear lower and wider than it really is, while the Golf’s standard wheels are replaced with unique 17-inch ‘Seattle Black’ alloys. Inside, the main contact points are unique to the Golf GTD – a flat-bottomed steering wheel, a GTD gearshift and a standard tartan interior. The tartan finish is subtly different from that in the GTI, being grey, white and black, rather than red, white and black.

As with the entire Golf range, the new GTD will feature class-leading levels of safety with ABS, ESP (Electronic Stabilisation Programme) and seven airbags, including for the first time a knee airbag, all standard. The Golf was recently awarded a maximum five-star rating by the EuroNCAP crash testing agency.