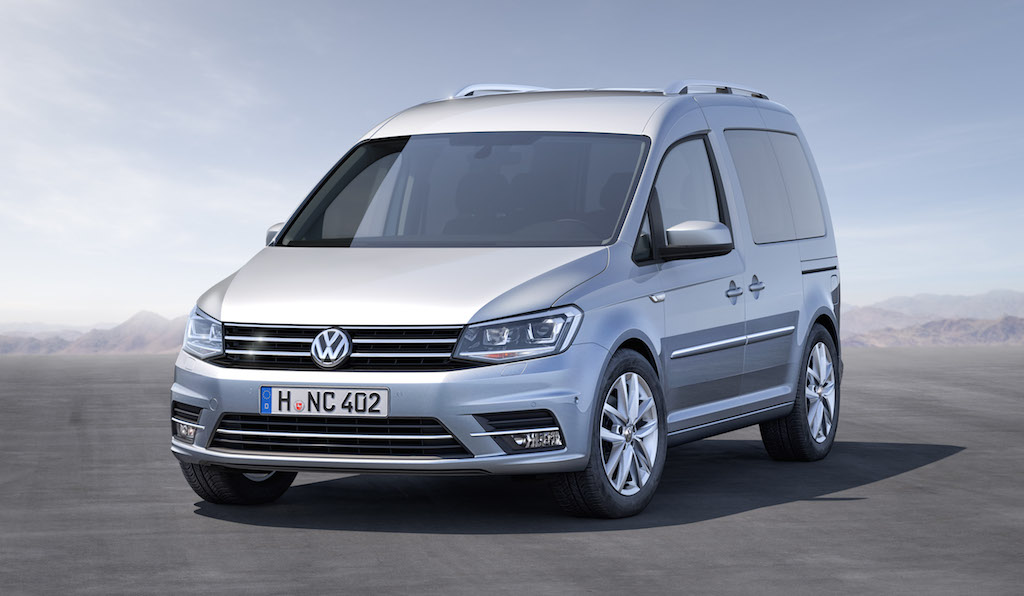 Volkswagen Commercial Vehicles has unveiled the fourth-generation of its hugely popular Caddy. The third-generation model recorded more than 1.5 million sales around the world during its eleven-year production – a success that the latest generation Caddy urban delivery van, and its passenger carrying brother, intends to continue.

In its fourth-generation, the Caddy shines in its class for having a high level of safety features.  Numerous new safety and comfort features protect the occupants and support the driver. “To achieve this, we have incorporated a large number of driver assistance systems, which are unmatched in the urban delivery van segment”, said Hans-Joachim Rothenpieler, Member of the Board for Technical Development of Volkswagen Commercial Vehicles.
One of these is the ‘Front Assist’ surroundings monitoring system, including City Emergency Braking.  If the driver fails to see an obstacle below a speed of
30 km/h (19 mph), the system automatically applies the brakes, aiming to prevent any collisions. In the passenger carrying variant, Caddy Life, occupants are protected by the use of side and curtain airbags.
Approximately 22 per cent of all accidents involving injuries are collisions with more than one obstacle. In order to minimise the risk related to this scenario, the award-winning Multi-collision Brake System is included as standard in the new Caddy. After a collision, it automatically initiates braking if the driver is no longer able to take action.
Other options which are now available include the ‘Light Assist’ and ‘Driver Alert’ systems.
The latter recognises any deviations from normal driving behaviour and recommends to the driver when a break is necessary. Also available is the option of a heated windscreen, which helps to ensure a permanently good view, no matter the weather.

For the first time on Caddy, there is the option of Adaptive Cruise Control (ACC), which is active at speeds of 0-160 km/h (0-100 mph) with DSG or 30 to 160 km/h (19-100 mph) with a manual transmission – and uses radar sensors to monitor the distance and relative speed to vehicles in front. When used in conjunction with DSG, the ACC system can also slow the vehicle down, for example in queues or traffic jam situations, to a complete stop.
In combination with the Composition Colour and Composition Media radios and with the Discover Media radio-navigation system, customers are able to order a reversing camera. The optional ‘Park Assist’ system enables automated parallel parking as well as parking at right-angles to the carriageway – an especially practical feature for courier services.

An evolution of a best-seller: the new Caddy’s design impresses with sharper folds and clearly defined surfaces with stylish clarity. The re-designed front and the distinctively presented rear give the new compact van an unmistakable character – further distinguished by the new look of the front and rear lights. While remaining extremely functional, the high-quality urban delivery van has gained noticeably in presence.
In keeping with the expressive exterior, the vehicle’s interior also features accentuated lines and shapes. Striking decorative trims with integrated air vents and a new generation of infotainment equipment underline the new Caddy’s modern look.

The new Caddy will be launched in Germany at the end of June. UK vehicles will arrive later in the year.