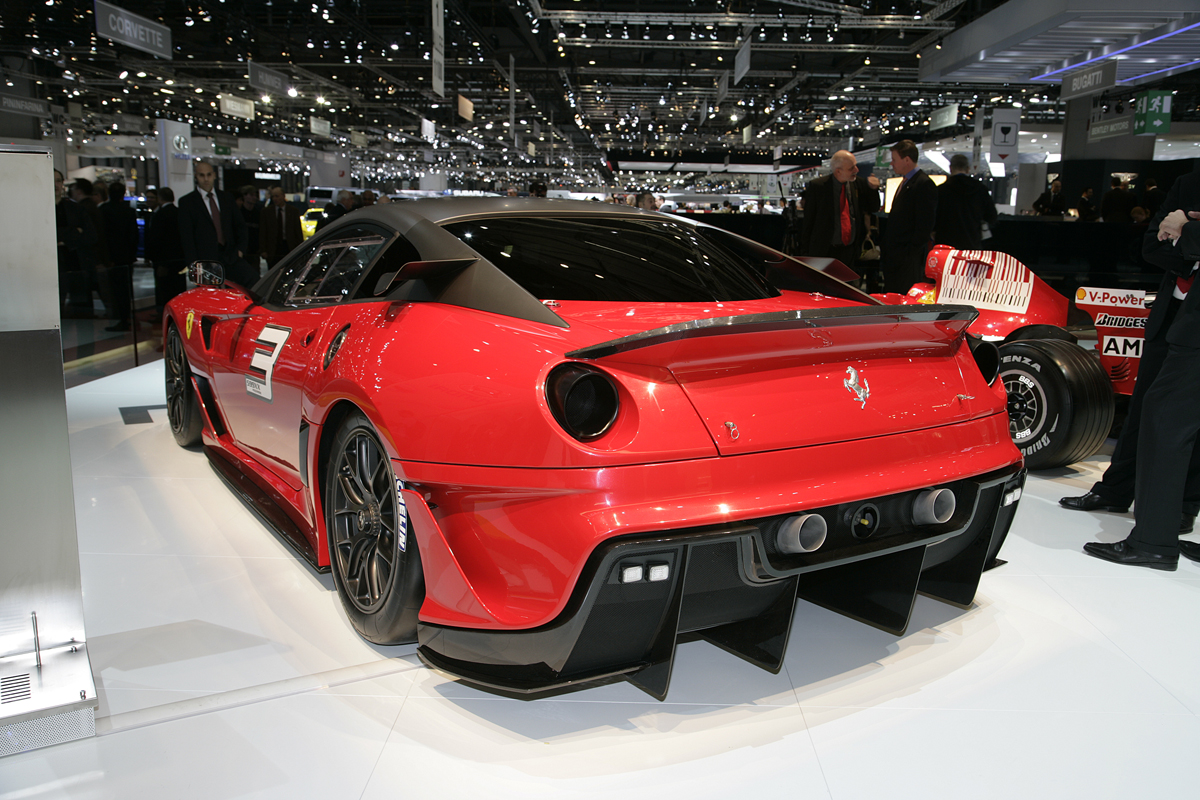 The 79th Geneva International Motor Show provides the venue for Ferrari to announce two new pieces of good news: the arrival of the Handling GT Evoluzione (HGTE) package for the 599 GTB Fiorano and the world debut of the 599XX which is aimed at a select group of clients. The latter new car incorporates the most advanced technologies resulting from Ferrari’s road-going and F1 research. Many of the technological solutions it carries are being used for the first time and have been developed exclusively for this special car.

The HGTE package is designed to deliver even sportier, more dynamic driving, to highlight the 599 GTB Fiorano’s positioning in the “sports car” segment. The technical modifications introduced with the HGTE Package to the car’s set-up and tyres ensure tighter, more dynamic handling, with sharper cornering and improved responsiveness whilst still being easy to drive. The HGTE package further underlines the 599 GTB Fiorano’s different mission from Ferrari’s other current 12-cylinder, the 612 Scaglietti which, along with the 8-cylinder Ferrari California, represents the Grand Tourer personality of the Prancing Horse’s current range.

The 599XX, on the other hand, is aimed at owners that want to experience Prancing Horse driving pleasure at its purest – in fact, Ferrari will be organising a programme of dedicated track events for it in 2010/2011. Conceived exclusively for track but not official competition use, and thus unrestricted either by homologation limitations or regulatory restrictions, this extreme sports car incorporates the very best of Ferrari technology, the fruit both of our Research and Development Department’s labours and our long experience and experimentation in F1. The plethora of aerodynamic, electronic control and handling innovations used together for the first time on a single car make this model a genuine technological laboratory. The solutions adopted for the 599XX – many of which will remain exclusive to it – enhance its levels of performance and can be summed up in one highly relevant statistic: a Fiorano lap time of just 1 minute and 17 seconds. Although it is such an extreme car, the 599XX still retains the ergonomics of the road-going model which are essential for non-professional drivers engaging in intensive track driving.

In addition to the 599 GTB Fiorano equipped with the Handling GTE package and finished in a new three-layer metallic Rosso, and the 599XX in a colour matching the F2008, Ferrari clients and enthusiasts will also be able to admire the single-seater that recently won the Prancing Horse its 16th Constructors’ World title. We will also be showing our full range of road cars: the Scuderia Spider 16M in a Grigio Titanio livery, the 430 Scuderia in Rosso Corsa and our two Grand Tourer models, the Ferrari California in Nero Metallizzato with a Sabbia interior and the 612 Scaglietti. The latter will be displayed in the Atelier, a dedicated area where owners can get a taste of the virtually endless personalisation options on offer to them.

599 GTB Fiorano with the Handling GTE package
When it first debuted, the 599 GTB Fiorano set a new standard in terms of performance that remains a benchmark for new sports car development to this day. Now Ferrari is introducing the new Handling GTE (Handling Gran Turismo Evoluzione) package for the model to further underscore its sportiness and handling.

The package includes a modified set-up with stiffer springs and rear anti-roll bar as well as new calibration settings for the magnetorheological shock absorbers when the manettino is at its sportier settings. The ride height has also been lowered which in turn lowers the car’s centre of gravity. This combined with the new set-up helps improve body control. The package also includes specifically optimised tyres featuring a compound that offers even better grip.

The car’s electronics have also evolved to ensure even more prompt response to driver commands. The F1 gearbox’s shifts are now even faster in high-performance settings, while a new engine software strategy has improved accelerator response.

The exhaust silencer has also been modified with the result producing an even more marked and thrilling sound under hard usage whilst still delivering just the right comfort levels at cruising speed.

From a styling point of view, the package also includes some distinctively sporty exterior and interior features with carbon-fibre widely used in the latter. The 20” split-rim wheels are new with a special diamond-cut and matte silver finish. The rear diffuser is finished in matte black to underscore the car’s new set-up and highlight the chromed tail pipes. The cabin is sportier too thanks to a sophisticated mix of full-grain leather, black Alcantara® and carbon-fibre trim.

The new seats are trimmed in a new two-tone combination of leather with black Alcantara® inserts, and the seat backs are trimmed entirely in carbon-fibre. Embroidered in contrasting stitching on the headrest are a Prancing Horse and the words “Handling GTE”.

599XX
While based on the 599 GTB Fiorano with the same transaxle layout and engine type, this prototype is an extreme track car. Ferrari’s engineers have carried out extensive work on the engine’s combustion chambers and inlet and exhaust tracts. These modifications, combined with the fact that internal attrition has been reduced and the maximum revs have been boosted to 9,000 rpm, helped achieve the target power output of 700 hp at 9,000 rpm. Particular attention was also paid to cutting the weight of the engine unit components. This was achieved both by optimising forms – as in the new crankshaft – and adopting exclusive materials, as in the carbon-fibre used for the intake plenums. A new gearbox shift strategy cuts overall gearchange times to 60 ms.

The 599XX is characterised by an innovative electronic concept called the “High Performance Dynamic Concept” which has been designed to get the maximum performance from the car by managing the combination of the car’s mechanical limits with the potential of its electronic controls. The mechanical and electronic systems work together to get the maximum performance from the car under extreme high performance driving, for consistent lap times. The sporty handling has been improved thanks to the adoption of second generation SCM suspension system. Track usage is also made easier thanks to the new “virtual car engineer”, a screen in the car that provides a real-time indication of the vehicle’s efficiency.

The 599XX’s aerodynamics were honed in numerous wind tunnel test sessions with the result that the car now boasts 280 kg of downforce at 200 km/h (630 kg at 300 km/h). The front underside of the body is completely faired-in and the vents that channel hot air from the engine bay have been moved to the bonnet.

The “Actiflow™” system increases downforce and/or cuts drag depending on the car’s trim cornering conditions, courtesy of the use of a porous material in the diffuser and two fans in the boot which channel the air flow from under the car out through two grilles next to the tail-lights. Winglets have been added to the rear buttresses to increase downforce. while synthetic jets have also been incorporated into the rear of the car to control and smooth the air flow and to reduce drag.

Ferrari’s engineers have also used F1-derived “doughnuts” which partly cover the brake discs and wheel rim. These have the dual function of improving both aerodynamics and brake cooling.

In terms of the bodywork, composites and carbon-fibre have been widely used and the engineers drew on their experience in working with aluminium to reach the weight target. The development of increasingly high-performance materials has also benefited the carbon-ceramic material braking system. The brake pads are now made from carbon-fibre which means that the callipers are smaller whilst guaranteeing the same efficiency. The new racing carbon ceramic braking system also delivers shorter braking distances and is generally more efficient due to the weight saving.

The 599XX comes with slick tyres (29/67 R19 Front and 31/71 R19 Rear) specifically developed to maximise stability in cornering and increase lateral acceleration. They are fitted to 19 x 11J wheel rims at the front and 19 x 12J at the rear.