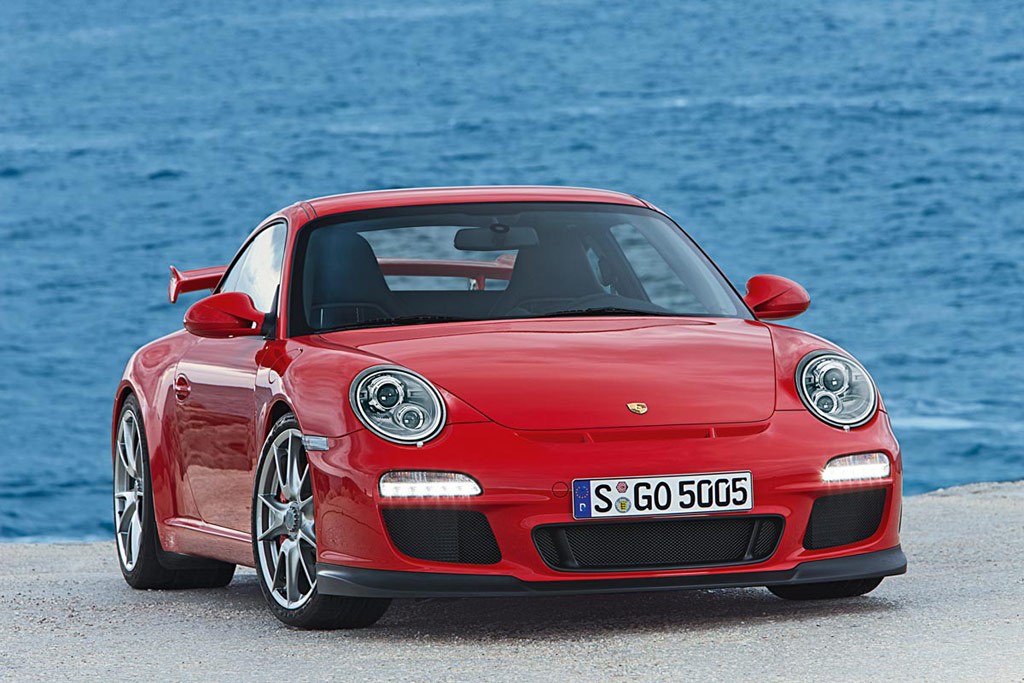 The new Porsche 911 GT3, which will make its world debut at the Geneva Motor Show on March 3 2009, is the latest evolution of an iconic sports car. Embodying the essence of more than 23,000 Porsche racing victories, the 911 GT3 is the ultimate integration of driver and car and arrives in the UK this autumn.

In developing the second generation of the Type 997 911 GT3 into the most sporting and dynamic road-going 911 ever with a naturally-aspirated power unit, Porsche has applied a wide range of know-how gained in motor sport. Indeed, this is precisely why the new GT3 is truly impressive not only on the road, but also on the race track.

The 911 GT3 offers an even higher standard above all in two key areas: performance and driving dynamics. The proven six-cylinder naturally aspirated power unit now develops a maximum output of 435 hp (320 kW), up 20 hp over its predecessor. This results first and foremost from an increase in engine capacity by 200 cc to 3.8-litres and from improved cylinder head gas flow: now not only the intake, but for the first time also the exhaust camshafts, are adjusted by VarioCam.

A further important point is that, through its upgraded power and performance, the flat six ‘boxer’ engine also offers a significant increase in torque at medium engine speeds, a benefit of particular significance in everyday motoring. Clearly, this also means a further improvement in performance; the new GT3 accelerates from a standstill to 62 mph (100 km/h) in 4.1 seconds and reaches 99 mph (160 km/h) in 8.2 seconds. Top speed is 194 mph.

The second emphasis in developing the 911 GT3 to an even higher standard was to further improve the car’s driving dynamics. For the first time, the 911 GT3 comes with a particularly sporting variant of Porsche Stability Management (PSM), offering the facility to deactivate both Stability Control (SC) and Traction Control (TC) in separate steps. And to give the driver unrestricted, individual control over the driving dynamics of his car, these functions are not reactivated automatically even under the most extreme driving conditions, but only at the touch of a button.

The new GT3 offers increased grip and stability at high speeds, courtesy of specific modifications to the car’s aerodynamics which have increased downforce front and rear to such an extent that the overall air pressure pushing down on the car is more than twice as great as on the former model. At the same time, the new ‘Aerodynamics Package’ gives the GT3 a distinctive appearance which is further accentuated by new Bi-Xenon headlights, LED rear light clusters, and modified air intakes and outlets.

The Porsche Active Suspension Management (PASM) fitted to the 911 GT3 has enabled Porsche engineers to make the springs and anti-roll bars stiffer yet again, thus ensuring even more precise handling in the PASM ‘sports’ mode. However, the PASM ensures appropriate ride comfort suitable for everyday use when in the ‘normal’ PASM mode. The GT3 rides on new, lighter wheels in a racing-inspired design – with a centre locking nut – fitted with ultra-high performance (UHP) tyres. Tyre pressure monitoring is fitted as standard.

With driving dynamics and performance increasing to an even higher level, following Porsche tradition the braking system has also been enhanced accordingly on the new 911 GT3. The brakes now feature larger friction discs and an aluminium cover to reduce un-sprung weight further still. Brake ventilation has been improved, which guarantees a higher level of consistent stopping power over long periods. As an option, the GT3 comes as before with an exclusive version of the Porsche Ceramic Composite Brakes (PCCB) made specifically for this model.

Making the car even more suitable for the race track, the new 911 GT3 will be available with the option of new and highly innovative Porsche Active Drivetrain Mount (PADM) engine mountings. These special engine mounts recognise a particularly sporting, race-like style of driving, making the normally ‘elastic’ engine mounts harder and particularly resistant. This retains all the motoring comfort of the GT3 in everyday traffic, while on the race track the effect of the mass forces coming from the engine is much reduced, particularly in fast bends and on winding tracks. Yet a further advantage is improved traction when accelerating from a standstill.

Another new feature is the optional lift system for the front axle which is able to increase the ground clearance of the car, at the touch of a button, for driving on bumpy surfaces or steep gradients – for example into an underground garage – by 30 millimetres (approx 1.2 inches).

The new Porsche 911 GT3 goes on sale in the United Kingdom and Ireland from autumn 2009, priced from £81,914. Further specifications and technical details will be confirmed nearer to launch.

Fitted to every 911 GT3 is a Porsche Vehicle Tracking System (VTS), a sophisticated vehicle security package approved to Thatcham Category 5 standard, and customers will also be able to explore the potential of their new car by participating in a complimentary course at the new Porsche Driving Experience Centre, Silverstone.