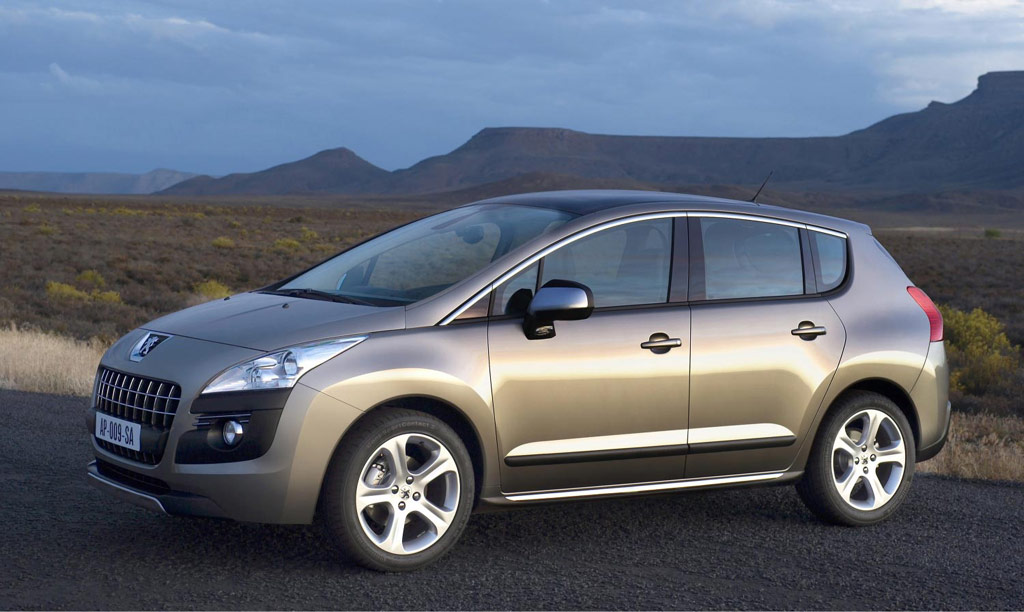 First seen as a concept at last year’s Paris Motorshow – Prologue Hybrid 4 – Peugeot’s new 3008 cross-over vehicle can now be revealed in all its glory.

This new, compact and spacious cross-over represents a totally new offering in the UK car market. It is aimed at sport-loving couples, modern families, senior citizens and active young people who desire a type of car which does not fall into existing categories, such as hatchbacks and MPVs. Due to this positioning, it was perfectly natural that the project originally code named T84 should be called 3008.

The 3008 is based on Peugeot’s short wheelbase platform 2, which was chosen due to its exceptional rigidity and excellent acoustic and vibration properties.

The 3008 structure has been carefully designed to provide maximum secondary safety as well as provide a structure with the same level of rigidity as that of a saloon. To reduce emissions and, therefore fuel consumption and running costs, the weight of the vehicle was kept to a minimum.

To help reduce the vehicle’s weight, laser welding was used instead of normal spot welding, the front overhang was kept to a minimum by the introduction of an innovative new type of impact absorber, a number of light weight materials were used and the thickness of the panoramic glass roof has also reduced to just 5 mm, while still retaining the same levels of safety as current roofs fitted to the 308 SW etc.

This name describes the hybridisation of a traditional engine with an electric motor, in an original layout in engineering terms that also allows the possibility of four-wheel drive.

While the traditional engine is located as usual under the bonnet and drives the front wheels, the electric motor is located under the load area floor adjacent to the rear suspension. This technology not only represents a real breakthrough in terms of fuel consumption and CO2 emissions (a reduction of around 35%), but also in terms of four-wheel drive.

At the Paris Motor Show, the Prologue Hybrid 4 concept car was presented with a 2.0 litre HDi FAP engine with a power of 163 bhp and an electric motor with a maximum capacity of 37 bhp providing a maximum torque of 300 Nm at the front and 200 Nm at the rear. Despite this performance, its fuel consumption in the combined cycle is only 4.1 litres / 100 km, with CO2 emissions of just 109 g/km!

This technology makes it possible to combine dynamic performance with respect for the environment, while at the same time maintaining the benefits of a spacious vehicle.

Another important benefit is that there are no mechanical connections between the front diesel engine and the rear electric motor, everything is controlled electronically “by-wire”. This avoids any architectural constraints affecting the interior space and style of the passenger compartment.

The Hybrid 4 technology, which is still under development, was incorporated into the T84 programme from the very outset, since it is fully consistent with the approach adopted for the vehicle. In accordance with the announcement made at the Paris Motor show, the 3008 will be the Group’s first vehicle to be equipped with Hybrid 4 technology. The commercial launch of this four-wheel drive hybrid cross-over is planned between now and 2011.

At the front, the Peugeot design genes have evolved to match the car’s generous volumes while still setting it apart from what has gone before. The streamlined headlamps are expressive in a new and original way, both dynamic and reassuring. The single front grille helps create the effect of a luxury off-roader, with a look reminiscent of the world of the SUV. At the rear, the wings with their structured curves blend smoothly with the ruby coloured rear lights with their hi-tech finish, indicating the presence of light emitting diodes. The use of a split rear tailgate as on the 4007, further illustrates the “Outdoor” spirit of the 3008.

The driving position of the 3008 resembles in many ways that of an aircraft’s cockpit, as it is truly designed for the user in mind. The fascia is uncluttered and elegant allowing a particularly good view of the outside.

The use of high quality materials throughout the interior creates an undisputable high level of perceived quality, both visually and to the touch. According to the particular version, above the centre console incorporating the air conditioning and audio or telematics controls, the driver could have at their disposal a series of toggle switches that control two new systems. The “Head Up Display” and “Distance Alert” system both further contribute to the aeronautical feel of the driving position.

By day, occupants also benefit from the light coming from the large glazed area, including 1.70 m2 from the front windscreen. An optional or standard glass panoramic roof is also available with a surface area of 1.60 m2, virtually equivalent to that of the 308 SW.

The 3008 benefits from the most efficient air conditioning unit fitted to a platform two vehicle. The high volume air flow is distributed by four individual vents mounted in the fascia panel, heating ducts for the feet of the front rear occupants, and two adjustable vents for the rear passengers. Two levels of air conditioning are available: manual or automatic. The latter can be adjusted individually by each of the front occupants and benefits from a new feature, the Air Quality Sensor (AQS). This function, linked to an air quality sensor located upstream of the passenger compartment air intake, automatically controls the closure of the air recirculation flap if a high level of outside pollution is detected.

Inside the 3008 offers occupants nearly 50 litres of storage space, three 12V power connections and according to the version, the rear occupants can also benefit from side sun-blinds and / or dark tinted windows.

The 3008 benefits from an accessible and intelligent load space. Access is made easy by the split tailgate of which the lower tailgate flap can become a seat or be used to support a weight of 200 kg. Inside the load area floor can easily be compartmentalised thanks to the cleverly designed floor with its three adjustable positions. The load area has a constant width of 1,030 mm and a capacity of 512 litres or 1604 litres with the rear seats folded. On certain models the load area interior light is also a rechargeable portable torch as in the 308 SW.

Available as standard on all engines, the 3008 is fitted with an electric parking brake enabling additional storage space to be created in the centre console. Combined with the electronic handbrake the 3008 is also available with Hill Assist for greater convenience and safety.

Front suspension consists of an inverted pseudo MacPherson design with a linked anti-roll bar, a technology that provides rigorous control and a good level of vibration filtering. The rear suspension consists of a rear torsion beam, two rear suspension arms and an integral anti-roll bar, compact and offering excellent rigidity and body stability. The shock absorbers are designed and produced by Peugeot to ensure a high level of road holding and comfort.

On versions fitted with the two highest performance engines (1.6 litre THP petrol engine and a new 2.0 litre HDi FAP diesel engine) an all new Dynamic Roll Control system has been developed. The system, appearing for the first time in this segment of the market, further enhances the dynamic qualities of the 3008 while still retaining a high level of comfort.

The “Outdoor” abilities of the 3008 are further strengthened through an innovative traction control system, Grip Control. The system consists of an upgraded traction control system with five operation modes and special mud and snow tyres. The driver is, therefore, able to optimise the traction of both front wheels, enabling the vehicle to have a genuine ability to overcome difficult situations where the wheels have little grip.

Electro-hydraulic power steering is fitted to all models, which varies the assistance according to the speed of the car, speed of rotation of the steering wheel and the temperature of the power steering fluid.

Six power train options will be available between launch and the autumn of 2009.

The 3008 benefits from the Group’s extensive experience and the use of the latest technology to provide the best possible protection for all its occupants. The structure and restraint systems are designed to achieve a five star rating under the new 2009 Euro NCAP standards. Six airbags are available combined with five three-point inertia reel seatbelts and an audible fasten seat belt warning system. The two outer rear seats are also fitted with Isofix child seat mountings.

The 3008 range will go on sale in the UK at the end of 2009 and more information concerning specification and prices will be announced nearer the launch date.