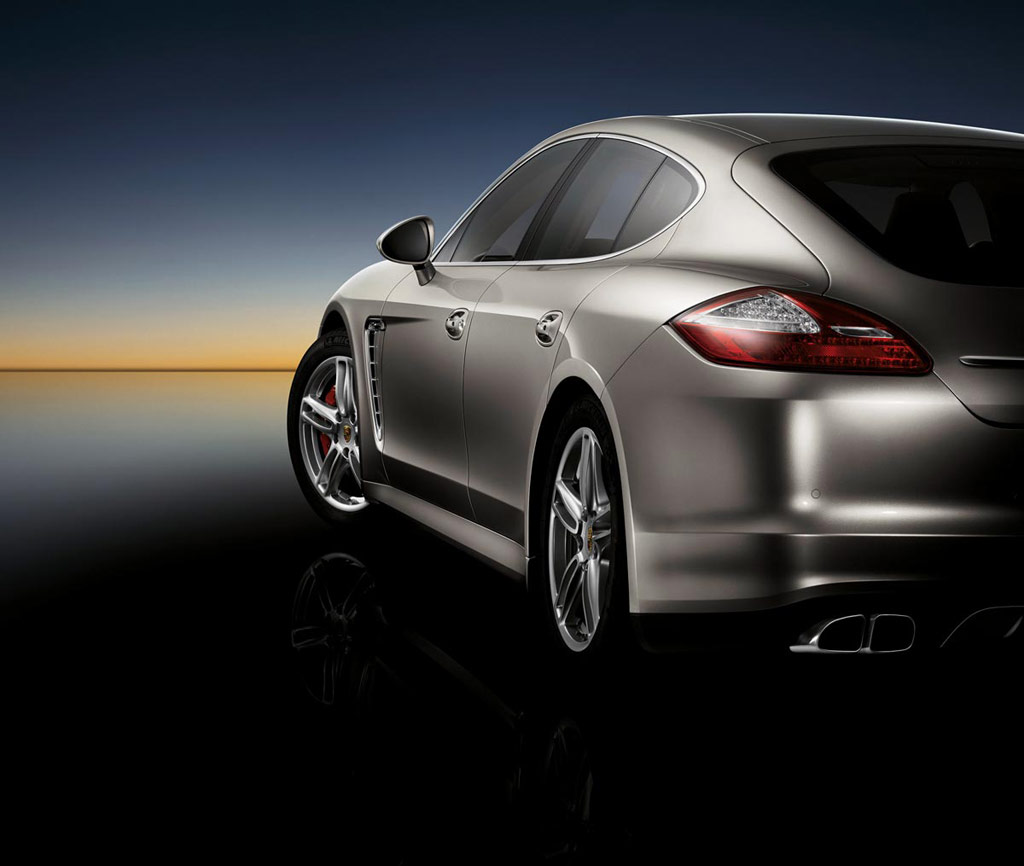 Porsche is proud to present the first official photos of the Panamera. In its design, profile and silhouette, the unique four-seater stands out clearly as a new member of the Porsche family.

Conceived and designed as a four-door grand touring sports car, the Panamera combines numerous talents in typical Porsche style: sporting driving dynamics, a generous and versatile interior, and the supreme driving comfort of a Gran Turismo. Joining the 911, Boxster and Cayman sports cars and the four-wheel drive Cayenne, the Panamera is officially the fourth Porsche model series.

The designers of the Panamera have succeeded in positioning this unique car as a brand-new and truly different model while nevertheless retaining the looks of a typical Porsche. Through its proportions alone, the Panamera stands out clearly in its market segment: measuring 1931mm (76.0in) in width and 1418mm (55.8in) in height, the Panamera is both wider and lower than comparable four-door models. The unmistakable, sleek GT silhouette is created by an overall length of 4970mm (195.7in) and short, sporting overhangs front and rear.

In its styling and details, the Panamera follows the design philosophy refined over decades on the 911 and successfully implemented also on the Boxster, Cayman and Cayenne.

Through its design language alone, the Panamera will establish a new segment versus the competition. The symbiosis of sports car DNA derived from the looks of a coupé, the unique interpretation of the classical saloon body, and the benefits of a versatile interior give the new Porsche its truly unmistakable appearance.

As an example, the Panamera comes with highly individual, strongly contoured air intakes instead of a conventional radiator grille. Striking wheel arches and the long, sleek bonnet create that typical 911 ‘landscape’ at the front of the car which Porsche customers have appreciated for no less than 45 years, with the distinctly contoured wings as flanks bordering the flat front panel. The V-shaped lines along the bonnet, and the rear window tapering out like an arrow towards the tail, convey the features characteristic of a sports car to the new, highly individual Panamera class. The striking, muscular shoulders over the rear wheels, the dynamic sweep of the coupé-like roof-line, and the visible tailpipes again signpost the DNA so typical of a thoroughbred Porsche.

The elegant roof arch extends stylishly over the generous interior, begging the beholder to get inside. Like all Porsche models, the Panamera is oriented in every respect to the needs and wishes of the driver. But now, courtesy of the new concept of space and the sporting architecture of the interior, the car’s occupants are also able to experience this special ‘pilot sensation’ from all four seats. Every occupant enjoys supreme ergonomic comfort in both the front seats and the two firmly contoured individual seats at the rear.

The luggage compartment easily takes every passenger’s baggage, the interior’s ‘variable space concept’ with its folding rear seat backrests enabling the driver and passengers to adjust the luggage space individually to their personal requirements. The coupé tailgate in the sporting rear end combines superior versatility for daily use with stylish elegance.

Porsche has developed superior and up-to-date power units for the Panamera which, as you would expect, reflect all the qualities typical of the brand – the V-engines within the engine compartment come with six and eight cylinders and range in power from 300 to 500 bhp. Some of the engines use turbocharger technology, Direct Fuel Injection making them both fuel-efficient and powerful all in one. The flow of power to the wheels goes either through a manual six-speed gearbox or the Porsche seven-speed Doppelkupplungsgetriebe (PDK), or double-clutch gearbox.

In addition to featuring a sports-oriented rear-wheel drive chassis, the top version of the Panamera comes with even more sophisticated all-wheel drive arrangement. This is also available for the other versions as an option. As a further highlight, Porsche is preparing a particularly fuel-efficient version of the Panamera with hybrid drive. Further details on the engines, transmissions, performance, prices and equipment will be disclosed in the spring 2009.

The Porsche Panamera will be built at the company’s Leipzig Plant, where a production hall measuring 22,000 sq m (almost 237,000 sq ft) and a logistics centre are currently under construction. While the engines featured in the Panamera are built at the Main Porsche Plant in Zuffenhausen, the painted bodyshells will be supplied by the Volkswagen Plant in Hanover. The Leipzig Plant will then assemble the Panamera for final delivery, with an annual sales target of 20,000. Porsche is once again cooperating largely with German suppliers in the production of the Panamera, with 70 per cent of the car’s overall value being created domestically. Consequently, the Panamera is most definitely a car ‘Made in Germany.’

The new four-door Porsche Panamera gran turismo will be making its world debut in spring 2009, and the first models will be arriving in Porsche Centres worldwide from late summer next year.